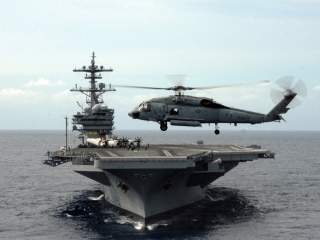 While the world ponders the latest North Korean long-range rocket launch, another recent missile firing in Asia, this time by China just days ago, seems to have flown under the radar. It could, however, be just as significant.

First reported by the Web site Alert 5 and then picked up by the good folks over at Arms Control Wonk, CCTV seems to have released the first launch footage of the much discussed DF-21D, or “carrier-killer” missile, on Wednesday, February 3.

In an interesting post where the comment section also features an in-depth discussion of the video footage that is just as important as the analysis itself, Catherine Dill, a research associate at the James Martin Center for Nonproliferation Studies, breaks down the launch in great detail:

“The video begins at a base the night before a launch exercise. . .

“An alarm sounds, the troops prepare the convoy, and then they deploy to a remote area for the launch. The convoy shows several shots of the TEL. It appears to be a DF-31A. . .

“After the launch, it is time for the celebrations–complete with jiaozi–in a tent. During the celebrations the soldiers watch prerecorded videos from their families. Although probably somewhat staged, this scene does illustrate some of the hardships of the young launch brigader in being deployed far from home in remote areas for long periods of time. . .”

So where is the missile being fired from? Dill gives us some ideas:

“I fear my time of relying on the Directory of PRC Military Personalities is coming to a close, but in final bout of luck Pang Xiuhai (庞秀海) is in the book associated with Base 51’s 816th Mobile Launch Brigade (96115部队) out of Tonghua, Jilin Province. This is rather far north, so all of the snow present in the video makes sense (chains are even visible on the TEL if one looks closely).

“Now, where near Tonghua might this base be located? Although the soldiers put their phones in a glass case, there is a bus stop for the 96115 unit in Google maps. It is not directly outside of the facility, but it’s close enough that I can find the facility.

“I have high confidence in the identification match based on the hedge pattern and the tile pattern in the cement.”

So what do we know about the missile? Dill continues:

“The TEL is for a DF-31. However, I have associated Base 51 brigades with DF-3s and DF-21s (and now DF-21Ds). I’ve been scrutinizing the video, and a closer inspection of the launch shows what appears to be a DF-21 or DF-21D missile exiting the canister. The shape of the nose-cone appears to more closely resemble a DF-21 warhead than that of a DF-31.

“This is not the highest quality video, so I do have some uncertainty about this determination. But if this is the case, why? At the moment, I don’t know. But I’m going to look into it.

“On a final note, I have not yet identified the site to which the launch brigade deploys. I commend anyone who wants to give it a try.”

The author later quite smartly updated her post after it made the rounds on the Internet. The update, posted below, seems to add much more weight to the idea that the DF-21D has been unveiled to the world in a launch setting:

“Update (7 Feb.): In my haste to post this quickly before the DPRK satellite launch (just barely made that deadline, as it turns out), I did not scrutinize the launch image as closely as I should have. My colleague at MIIS Philippe Mauger pointed out via email and my colleague RAJ47 pointed out in the comments here and on twitter (here) that the TEL during the launch is a DF-21D, which certainly explains the missile. Another colleague pointed out on Twitter that the PLA even clarified this. So now the question is why the 816th brigade was driving around with an old DF-31 TEL. In the video the brigade appears to be preparing the DF-31A TEL for the launch–was this for show? It is also not clear to me from the short video whether the DF-21 fired in the launch was already at the deployment location or was a part of the same convoy from the Tonghua main base, or whether that portion of the video was taken from a different exercise altogether.”

Obviously from what we can gather from the above there seems to be more questions than answers from this video (see below). However, and perhaps more importantly, China seems much more willing to show off its latest and greatest military technology with greater frequency and media savvy than ever before. So when does Beijing actually test its mighty killer of carriers against a live target in the open ocean? Your guess is as good as mine. Stay tuned. . .