We Now Know Why Russia Wants a 100-Megaton Nuclear Torpedo 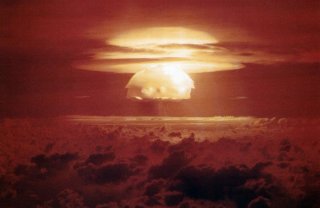 In a speech on March 1, 2018, Russian president Vladimir Putin detailed a half-dozen “invincible” new Russian weapons under development, which he assured would give his nation the ability to launch “unstoppable” nuclear attacks on the United States. The speech, which was met with cheers by the audience, was accompanied by a video presentation that included an animation of a separating nuclear warheads raining down on Florida, apparently in the vicinity of President Trump’s retreat in Mar-a-Lago.

The bellicose rhetoric is surely intended to rally political support for Putin’s reelection on March 18, as well a reflection of Moscow’s own insecurity, stemming from fears that new U.S. ballistic-missile defenses may eventually render Russia’s nuclear deterrence ineffective. Putin pointedly highlighted new systems that would circumvent BMD capabilities such as long-range cruise missiles and a hypersonic glide vehicle.

Perhaps the most novel of the weapons Putin described was an Autonomous Underwater Vehicle codenamed Status Six or Kanyon—basically a long-range nuclear-armed drone torpedo that does not rely on remote guidance. Development on the weapon predates the fall of the Soviet Union. For years there had been some debate as to whether there was real substance to the program, but the emerging consensus is that the new nuclear torpedo is quite real.

In September 2015, the Pentagon included the Status Six in its nuclear posture review. Just two months later, Russian media “accidentally” leaked an image detailing the weapon’s performance, and a prototype weapon was reportedly tested in December 2016.

Putin’s speech largely spelled out capabilities for the torpedo in line with what had previously been claimed. Supposedly the Kanyon carries an enormous one-hundred-megaton nuclear warhead which could be launched at a coastal city (think New York or Los Angeles) or a fleet at sea. The resulting underwater detonation could create an apocalyptic five-hundred-meter-high tsunami wave of irradiated water that would contaminate anything it fails to smash into oblivion.

The huge torpedoes would be mounted on older Oscar-class or newer Yasen-class nuclear-powered attack submarines. However, the subs wouldn’t have to get very close to hostile shores if the claimed range of 6,200 miles is accurate.

The Status Six would supposedly be capable of diving as deep as one thousand meters under the sea, and tearing through the water at fifty-six knots. For comparison, few military submarines are designed to dive deeper than five hundred meters. Furthermore, current U.S. Navy Mark 48 torpedoes have a speed of fifty-five knots, making interception unlikely. NATO lacks antisubmarine weapons designed to intercept a target so fast and deep.

Putin also claimed that the Status Six would be highly stealthy and undetectable. However, according to a submarine officer interviewed by Dave Majumdar, a torpedo heavy enough to carry a hundred-megaton warhead would likely be quite noisy. Thus, the Kanyon seems more likely to be very difficult to hit rather than impossible to detect.

The Cold War Nuke That Almost Blew Up the Caribbean

Russia’s renewed interest in nuclear torpedoes represents a full circle of sorts. When the Soviet Union developed its first nuclear warheads, its longest-range delivery system was the Tu-4, a reverse-engineered B-29 bomber. But the Tu-4 could not fly far enough to hit most of the continental United States. Instead, Moscow considered using submarines to attack coastal cities and naval bases with a nuclear torpedo. The concept resulted in the huge T-15, which measured 1,550 millimeters in diameter (nearly three times the diameter of a standard heavyweight torpedo) and weighed forty tons. But the Russian Navy never liked the concept, and the design’s flaws meant that it was not operationally deployed.

Instead, the Soviet Navy developed the standard-sized 533-millimeter T-5 nuclear torpedo for use against naval targets. Instead of directly hitting enemy warships, the idea was for the nuclear blast to capsize and irradiate two or three enemy vessels in one fell swoop—or knock out a lone enemy submarine underwater without having to ascertain its exact location. You can see a recording of a Soviet nuclear torpedo test here for an idea of what it would look like.

During the Cuban Missile Crisis, the captain of the Soviet submarine B-59 actually ordered the firing of a T-5 at U.S. ships—only to be countermanded by his onboard superior officer, the storied Vasili Arkhipov. Thus, the little-known nuclear torpedo almost triggered an apocalyptic conflict without even giving Khrushchev or Kennedy a chance to intervene.

The United States developed its own nuclear antiship torpedo, the wire-guided Mark 45 ASTOR, but eventually phased out the weapon in favor of more effective conventional torpedoes.

The Kanyon project is descended from the earlier T-15. But what exactly is the purpose of the intercontinental submarine torpedo, when Russia already has hundreds of nuclear intercontinental ballistic missiles (ICBMs)?

Yes, the United States’ Ground-based Midcourse Defense system may be capable of defending against a limited attack by less sophisticated ICBMs—but it surely cannot protect against Russia’s vast arsenal of more sophisticated weapons that deploy decoys, engage in evasive maneuvers and separate into multiple-reentry vehicles (MIRVs).

However, Michael Kofman, an expert on the Russian military and researcher at CNA corporation, argues that’s not looking far enough ahead. “Missile defense may intercept a large percentage of a second [retaliatory] strike arsenal, not today, but 20–30 years from now. Countries don’t think about today, they think about where technology is going based on investment and development. The US is pouring billions into missile defense. [Adversaries] are thinking about the credibility of their deterrent much further down the line.”

The T-15 was conceived as a first-strike weapon designed to secure victory in a nuclear war. In Kofman’s view, Status 6 has a fundamentally different purpose: it is a third-strike weapon, designed to inflict unacceptable damage even in the event that an American first strike degrades Russia’s ability to retaliate with ICBMs.

In other words, even if the United States could mitigate Russia’s missiles through a combination of preemptive attack and ballistic-missile defenses to absorb whatever survives, its drone nuclear torpedoes could still wipe out large coastal cities, even if only a few days after the missile barrage.

Some analysts have noted that it would be difficult for Russia to reliably maintain remote control a drone submarine designed for such long-distance missions, particularly at its reported maximum diving depth. What if Russia decided to call off the nuclear torpedo strike, or wished to use them as a sort of ticking time bomb to influence negotiations? This article by defense writer Robert Farley reviews some of the limitations imposed by using an AUV in a strategic role, as does the earlier piece by Dave Majumdar.

However, Kofman argues that remote control is not the point of a strategic weapon like the Status 6, and that the technology behind it need not be particularly exotic.

“This is not an adjustable counterforce weapon, and as Putin advertised, it is meant to be very deep diving, which tells you that nobody will be talking to it once it is launched. However, hitting fixed targets the size of cities is about the simplest thing to do these days. Los Angeles doesn’t move very much. The only issue to work out for such a weapon is navigation, and waypoints, but that doesn’t strike me as a particularly difficult.”

Some analysts still hold that the Status Six may instead be intended as an antiship weapon—indeed, the video presentation by Putin showed the torpedo wiping out a U.S. carrier task force, before switching to animation depicting an attack on a metropolis—or that it even may be a multipurpose platform with applications in underwater reconnaissance missions. However, the prominence which the weapon system has been showcased in Russian media leave little doubt that Moscow intends for the Status Six to be noted abroad, so as to enhance Russia’s deterrence.

Therefore, the Status Six project may simply represent the latest layer to the long-standing reality that any nuclear exchange would impose unacceptable costs on both participants, regardless of whether there is a “victor” or not. However, there is already alarming evidence that national leaders might overestimate or misunderstand defensive capabilities, whether or not those defenses could reliably defend against a city-destroying attack.

Indeed, Moscow’s fascination with new nuclear-weapons systems appear to stem from its fears that without a reliable nuclear second-strike capability, it will be “not listened to,” to quote Putin’s words.

“I suspect that they are worried what a combination of non-kinetic and kinetic means could do to their nuclear deterrent,” Kofman wrote me, “and they perhaps lack confidence that it is sufficient. Ultimately, powers struggle to know how much is enough.”