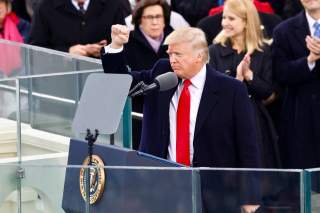 You can already hear it starting. The cries and eulogies of what never was and what could have been — the magical lost trade deal, the amazing Trans-Pacific Partnership (TPP), the so-called “gold standard” of free trade agreements.

It was the ultimate pet project of many free-traders here in Washington, who proclaimed TPP would usher in a new age of profitable trade, tight labor standards, protection for intellectual property and so on.

One senior trade official in Washington that actively advises multiple Republican congressman and senators explained to me just last week: “America stands to lose lots of jobs, lots of economic growth, lots of prestige, and lots of future clout in Asia if our new President withdraws from TPP.”

Except none of it is true. Well, at least for the United States, that is.  You see, TPP, was never about trade for Washington.

According to economist Samuel Rines, America’s GDP would only grow at an insignificant 0.13 percent, or roughly $27 billion, by 2025.  As Rines explained in The National Interest back in 2014, “At about 57 percent of TPP participant GDP and 40 percent of the population, the U.S. is too big to benefit from the deal, and many of the other nations involved are already tied together by agreements.

If the entirety of the $210 billion annual benefit to 2025 global GDP from TPP were to accrue to the U.S., it would only add about 1 percent to GDP.”  Does any of that look like a game-changer?

But as Rines noted two years ago, TPP was never about the money, or as he explained, “an immediate economic benefit” but “engaging with emerging Asia and being present while the rules of trade are set.”

To be fair — and not to dance on the grave of what is likely a dead deal — creating new rules of the road in Asia when it comes to trade could be done in lots of different ways. Does one really need some fancy new trade deal, that does zip for America economically, to make that happen?  The simple answer has always been: no.

It seems it’s about time that TPP get outed for what it really was — and why I supported it even when it did little for America.  It was the sort of agreement that transcended economics, especially for Asia-hands. And that is because TPP had a much more important function: Pushing back against the rise of China by reinforcing our partnerships and alliances in the region.

While no one in the Obama administration would ever admit it on the record, the “pivot” or “rebalance” to the Asia-Pacific was always about limiting Beijing’s ability to dominate the region, while, at the same time, walking a tight-rope to ensure China did not become an outright enemy.

This is why Obama avoided placing large amounts of military muscle into the region or courting even stronger nations like Vietnam or Taiwan — his team always knew the Chinese reaction would be swift and potentially painful.

TPP’s real goal was to go far beyond trade, a deal with real strategic importance. TPP was meant to be a clear indicator that America has and will always forever be locked to the future of Asia — no matter how many fake islands China builds or how much it tries to bully its neighbors.

It was Asia’s safety blanket insurance that Washington was in Asia to stay, no matter what happened, now and into the un-seeable future.

What Happens Next Will Be Vital for the Trump Administration:

The good news is there is lots of ways to cement America to Asia and at the same time send a message to China that Washington will not retreat across the Pacific. In fact, TPP’s death can be an opportunity for the region — if handled correctly.

President Trump must now find an alternative way to reassure allies in the Asia-Pacific region, showing Washington will continue to engage Asia, promote mutually beneficial trade, but also take strong steps to ensure the region is not dominated or coerced by China.

This could include multiple bilateral trade agreements. Japan, Taiwan and Vietnam should be approached first as they are key to any new Asia strategy that President Trump will enact.

The president must also be sure to get the messaging right as TPP gets thrown in the trash—something that is not always his strongest suit. He needs to explain, in a less colorful fashion than normal, that TPP was a poor way to ensure Asia remains economically free and vibrant while immediately detailing his own vision for the region.

If he doesn’t, we know China will.