Why Do So Many Chinese Expect War? 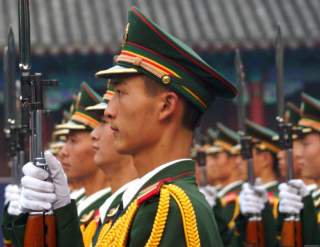 A professor of classical music in Beijing startled me in 2010 when he said, “When I look at my students, I fear we are headed for war within five years.”

His students don't seem like fenqing (“angry youth”). They are in a musical conservatory, after all, not a military academy. Many have overseas connections. But they are also ambitious, emotional, fiercely nationalist and for them war – any war – would be a gratifying affirmation of their country's ascendance. Like the 2008 Olympic Games but with real explosions, not fireworks. These kids lap up PLA propaganda films like Silent Contest even as they dream of Juilliard. My professor friend worries they just haven't thought things through, that their various aspirations are totally misaligned.

A similar message comes from a recent essay in The Economist. “What does China want?” it asks, and it concludes China may not get all it seeks. Understandably, China wants wealth and power. It also wants respect. Yet respect is love as much as fear. The Economist wonders if the Chinese state, with its heavy hand at home and blaring “cold-war, Manichean imagery,” will achieve this aim.

What do the Chinese people themselves want? As patriots, they want wealth, power and respect for their country.

They also want out. Of those who can afford to, 64% wish to leave, an extraordinary figure. At the same time however, most Chinese are nationalistic, so perhaps Beijing merely reflects their mood. As Jessica Chen Weiss argues, nationalism is not new. The only thing that varies is the Government's “green light/red light” indulgence of nationalistic public protest. Most alarming is the high level of anticipation for war among the Chinese public. And thanks in part to an endless parade of World War II television dramas, the target is clear: Japan. In a recent survey, only one-quarter of Chinese do not foresee future military conflict with Japan.

The “strange revival of nationalism” is a paradox of our age. War worship should totally contradict materialist aspirations, yet the two often go together. Perhaps some new citizens want the goodies of Western life without the full package of liberal rights and responsibilities. In the words of philosopher John Gray they “don't much care about getting to Denmark,” the supposed nirvana of Francis Fukuyama's modernity. Or they might, but they don't become Danes when they do.

Historically, the morphing of prosperity into nationalism has been a powerful trend. The “strange revival” may be exactly that: an atavistic reversion to type. In 1841, a Prussian aristocrat proclaimed the great virtue of economic progress over warfare:

“Under a good and wise administration...are not (our) inhabitants better fed, clothed and schooled? Are not such results equal to a victorious campaign...with the great difference that they are not gained at the expense of other nations, nor the sacrifice of the enormous number of victims that a war demands?”

Azar Gat's magisterial War in Human Civilization identifies that aristocrat as Field Marshal Helmuth von Moltke, the German Chief of General Staff, who 50 years later would blame the “passion of the populace” for warmongering: “Today, war and peace (are) no longer cabinet questions...Public opinion (may) prove stronger than the will of those who rule.” By the 1890s, Bismark's restrained Prussian growth machine had become unified Germany, now under the bombastic Wilhelm, who would later “roll the iron dice” for the honor of his Reich. Germany's economic success led to an expanded sense of diplomatic entitlement.

“Japan is panting for a fight. She has, at great cost, reorganized her army and founded a fleet, and would...readily avail herself of any opportunity of proving their value and showing to an admiring world what she can do with them. Of all possible opponents, China would be the most preferred, for the Japanese regard (the) mainland with a most holy hatred, mixed with a great deal of contempt.”

Those same words are depressingly imaginable today, with the roles reversed. Xi Jinping commands the PLA to be battle-ready. The state media uses harsh words like “unswerving,” “unflinching,” and
“uncompromising.” A defense academic warns the nation to prepare for World War III. An active-duty PLA major general scoffs that Japan can be “taught a lesson” with a third of his forces. No wonder 64% of Chinese surveyed think “hardening our position” is the way to resolve territorial disputes.

How do we explain the apparent contradiction between China's hostile nationalism and its great globalization project? Wouldn't war itself be greatest of all threats to its ambition? And why are the very countries demonized most by China's nationalism also attracting Chinese talent and wealth? There are many possible explanations. Of course people emigrate for many reasons, practical and personal. Perhaps China will prevail either in peace or war, and is spreading its reach confidently. The affluent 64% who want to emigrate probably aren't the same hard 64% who want to man up against Japan. Perhaps outsiders just don't “get” China. Or maybe folks are simply hedging their bets. Maybe the odds of war really are rising, and Chinese are voting with their feet.