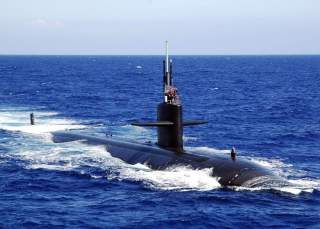 At least some U.S. naval analysts believe so and contend that the introduction of the new People’s Liberation Army Navy (PLAN) submarines is an indication of just how quickly Beijing is catching up to the West.

“The 93B is not to be confused with the 93. It is a transition platform between the 93 and the forthcoming 95,” said Jerry Hendrix, director of the Defense Strategies and Assessments Program at the Center for a New American Security—who is also a former U.S. Navy Captain. “It is quieter and it has a new assortment of weapons to include cruise missiles and a vertical launch capability. The 93B is analogous to our LA improved in quietness and their appearance demonstrates that China is learning quickly about how to build a modern fast attack boat.”

Other sources were not convinced that Beijing could have made such enormous technological strides so quickly—but they noted that the topic of Chinese undersea warfare capability is very classified. Open source analysis is often extremely difficult, if not impossible. “Regarding the question on the Type 093B, I really don’t know, anything is possible I suppose, but I doubt it,” said retired Rear Adm. Mike McDevitt, now an analyst at CNA’s Center for Naval Analyses. “I have no doubt that the PLAN has ambitions to at least achieve that level of capability and quietness.”

Though the Seawolf and Virginia-classes have surpassed the Improved Los Angeles-class as the premier U.S. Navy attack submarines, such older vessels will remain the mainstay of the service’s undersea fleet for many years to come. If the People’s Liberation Army Navy’s newest boats are able to match the capabilities of the U.S. Navy’s shrinking undersea fleet, Washington could be in serious trouble. Indeed, the U.S. Navy already anticipated that it could be facing-off against a Chinese submarine fleet that is nearly twice its size, but not as technically capable.

The U.S. Navy—which has roughly 52 attack submarines—is on track to have 41 attack boats by 2029. The Chinese, meanwhile would have “at least 70, and they’re building,” Vice Adm. Joseph Mulloy, the service’s deputy chief of naval operations for integration of capabilities and resources told the House Armed Services Committee’s seapower and projection forces subcommittee on February 25.  “You get back into the whole quality versus quantity issue, but at the same time the Russians are also building...and they build much higher-end submarines.”

In a 2016 report to Congress, the Pentagon noted that Beijing continues to upgrade and expand its submarine fleet: “China continues to improve its SSN force, and four additional SHANG-class SSN (Type 093) will eventually join the two already in service. The SHANG SSN will replace the aging HAN class SSN (Type 091). These improved SHANG SSNs feature a vertical launch system (VLS) and may be able to fire the YJ-18 advanced anti-ship cruise missile (ASCM). Over the next decade, China may construct a new Type 095 nuclear-powered, guided missile attack submarine (SSGN), which not only would improve the PLAN’s anti-surface warfare capability but might also provide it with a more clandestine land-attack option.”

The problem, however, is if Hendrix’s assessment is correct and future Chinese submarines are only slightly less capable than the Virginia or Seawolf-class vessels, the Navy could be in trouble. The technological edge the U.S. Navy—which is already woefully short on attack boats—is counting on might not be sufficient to counter Chinese numerical superiority. However, the service is continuing to improve the performance capabilities of its submarines on a continual basis. Nonetheless, one former U.S. Navy undersea warfare officer suggested that the service would come to regret having truncated the high-performance submarine-hunting Seawolf-class at three boats and focusing instead on the more multi-role Virginia-class.

Aware of the coming attack boat shortfall, the U.S. Navy is hoping to boost its attack submarine fleet by continuing to build two Virginia-class vessels per year even while it builds the next-generation Ohio Replacement Program ballistic missile submarine. However, if the Chinese are truly catching up technologically, Congress might consider accelerating the attack submarine build rate to the maximum capacity of America’s two nuclear-capable shipyards. At the same time, the U.S. Navy might have to accelerate the development of the next-generation successor to the Virginia-class, which has been tentatively designated the SSN(X) program and is scheduled to enter service in 2044.