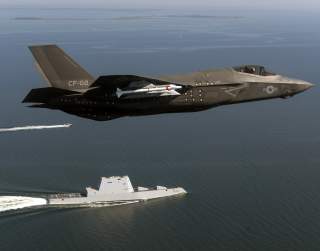 As Russia and China continue to improve their air defenses, stealth is increasingly becoming a perishable commodity.

While stealth technology will not become obsolete per se, the U.S. Air Force and particularly U.S. Navy official have said that low observables will have to be supplemented with electronic warfare. Indeed, Air Combat Command believes that the next-generation Penetrating Counter Air (PCA) replacement for the Lockheed Martin F-22 Raptor will likely make extensive use of electronic warfare. But tomorrow’s electronic warfare systems will be far more advanced than anything currently flying.

DARPA—and companies like Raytheon and BAE Systems—are developing advanced new electronic warfare systems that would use artificial intelligence technology to automatically learn how to jam a previously unencountered signal. Currently, only dedicated electronic attack aircraft such as the Boeing EA-18G Growler can identify and jam an unknown threat emitter because it carries a trained electronic warfare officer onboard. Other tactical aircraft including the Lockheed Martin F-22 Raptor and the F-35 Joint Strike Fighter rely on preprogrammed threat libraries—which must be periodically updated—to counter hostile radars.

In the future, however, new “cognitive” jammers will be able to identify and jam a signal autonomously. “Jammers must be smart enough to counter threat advances by instantaneously recognizing signals –even if they morph on the fly– and immediately generate the waveforms to effectively jam them,” said Dan Theisen, Raytheon’s director of Airborne Electronic Attack at the company’s Space and Airborne Systems division, in a statement. “Systems must be able to learn and react during an engagement; true, cognitive EW.”

Raytheon claims to have made “significant progress” in developing the technological underpinnings of a cognitive electronic warfare system—which would be able to overcome agile modern enemy radars and handle uncertain and noisy inputs. Indeed, the company claims to have developed software that can attack input signals that were not pre-programmed into a threat library.

Eventually, the company hopes to develop a genuine artificial intelligence-based cognitive electronic warfare system. “We’ve got to put our long-term thinking cap on to stay ahead,” Theisen said. “The future is about spectrum manipulation, and the electronic tools that you need to defend or prosecute a mission.”

If cognitive electronic warfare pans out, it would afford U.S. forces a huge advantage over new enemy air defense systems—which also increasingly make use of software reprogrammable waveforms. The technology could not only be applied to next-generation platforms such as the PCA or the Navy’s Next Generation Air Dominance—or F/A-XX—but also to existing tactical aircraft such as the F-22 and F-35. But so could existing fourth-generation tactical fighters—extending those machines’ lease on life by increasing their ability to survive in high threat environments.