America Is Getting Sucked into Another Middle East Quagmire 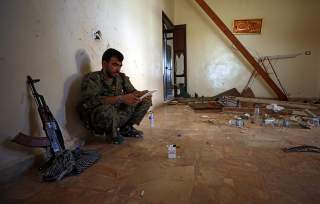 It’s sadly evident that President Donald Trump doesn’t know much about other nations or international affairs. Still, during the campaign he had at least one very sensible foreign policy belief: the United States should stay out of purposeless wars in the Middle East.

Now his own appointees are dragging the country into the Syrian conflict. Jumping into a multisided civil war, filled with parties who deserve to lose, would be dubious even if America had some recognizable interest at stake. But the United States does not. Worse, if Washington becomes an active combatant, it would find itself in a military standoff with Shia-giant Iran, NATO ally Turkey and nuclear-armed Russia over minimal geopolitical stakes.

In short, the administration’s slide toward confrontation in Syria policy is mad.

Syria almost certainly is the greatest tragedy growing out of the 2011 Arab Spring. President Bashar al-Assad refused to compromise with peaceful demonstrators. But the latter, backed by Washington’s seeming commitment to his ouster, saw little reason to accept anything less. Minority religious and other groups, having seen how the play ended in Iraq when the secular dictator was overthrown, preferred the devil they knew. Outsiders—individuals, groups and nations—joined the bloody fray. From whence developed one of the more horrid civil wars in human history.

The good news, such as it was, for America was that the United States had no cause for involvement. Syria had been a Soviet client state during the Cold War, but had neither attacked nor threatened America. Assad was essentially a geographical nullity for Washington.

Damascus was a more active enemy of Israel but had lost repeated military confrontations and was observing a cold peace. Syria even tolerated Israel’s destruction of a nuclear reactor. The Assad regime meddled in Lebanese politics, mostly a humanitarian rather than strategic concern. Syria’s alliance with Iran was more a sign of weakness than strength for both regimes. The Bush administration’s misbegotten invasion of Iraq far more dramatically shifted the regional balance of power in Iran’s direction than did any action ever taken by Damascus.

The belief from hindsight that the Obama administration merely need to have backed the right opposition faction to have defenestrated Assad, established a democratic Syria, and promoted religious and ethnic harmony always was a fantasy. One need only look next door at Iraq in judging Washington’s ability to remake the Middle East. Hillary Clinton would have done no better in Syria as America’s governor-general than she did as U.S. secretary of state.

Nothing in the ensuing six years of horrendous conflict changed the imperative for America to stay out. The Islamic State and other radical groups took advantage of Syria’s implosion, but they threatened virtually every government in the region, not the United States. Yet their rise was promoted by Washington’s nominal allies—Turkey, Saudi Arabia and the other Gulf States—who were more determined to oust Assad than defeat Islamic radicalism. America’s attempt to forge an anti-ISIS coalition merely encouraged the Gulf States to pull back, and Riyadh to launch its own counterproductive sectarian war against Yemen.

Moreover, while the odious Assad regime is no friend, it was the single strongest force blocking the advance of the Islamic State and other Islamists. Washington should have learned from the debacles in Iraq and Libya that who replaces the dictator is as important as getting rid of the dictator. Forcing out Assad would have triggered the second round in the civil war, in which the radicals almost certainly would have triumphed. Then there would have been calls for the United States to save Christians, Yazidis, Druze and Alawites, as well as preventing the ISIS flag from flying over Damascus. One can imagine just how long the American people would have stomached involvement in that fight.

Washington doesn’t like Syria’s allies, but that is no change from before. Although Lebanon’s Hezbollah, Iran and Russia all backed the Assad government, they are desperately attempting to salvage the past, not optimistically working to remake the future. However the conflict ends, the Assad government will be but a shell of its former self. Iran remains under siege in the Gulf, opposed by well-armed Saudi Arabia, most of the smaller Gulf States and Israel, backed by Washington’s ample military strength. Moscow has asserted its interests, but in influence still lags dramatically behind America. Indeed, given the hideous mess that the United States has consistently made of Middle Eastern affairs, Washington should welcome having another great power to share the blame for future follies.

The Trump administration’s slow walk into war is extremely dangerous. Washington has been introducing special operation forces to aid Kurdish and Arab forces advancing on Raqqa, the ISIS capital. With Turkey and its allies devoting more effort to attacking Kurdish militias than Islamic State militants, Washington recently put American troops between warring factions. The United States also has twice struck Iranian-backed militias in Syria’s south as well as destroyed an Iranian drone, near an American training base.

On Sunday the administration took a far more dangerous step, shooting down a Syrian jet which had been attacking the coalition Syrian Democratic Forces backed by Washington. U.S. planes staged a “show of force” to rebuff a Syrian ground assault and then downed a Syrian SU-22 which was bombing the SDF. No Americans had been threatened. Rather, explained a U.S. military spokesman, Washington acted out of “collective self-defense of coalition partnered forces.”

In fact, Damascus accurately characterized the act as “flagrant aggression.” When did the U.S. Congress declare war on the Syrian government and ratify an agreement creating a system of collective defense with a motley group of rebels who are considered terrorists by America’s neighboring NATO ally? Does the Trump administration claim the unilateral authority to establish “collective self-defense of coalition partnered forces” with any militia, group, faction, band or other amalgamation of combatants anywhere on the planet favored at a particular time?

The best case for the shoot-down is as a one-off, like the missile attack on a Syrian military base in retaliation for its apparent use of chemical weapons. Given the president’s limited attention span, he might quickly move on to other crises yet created. However, his very lack of interest in policy could allow his aides to concoct a new war, possibly with multiple combatants.

U.S. Central Command stated that its objective was “to de-escalate” and not to issue “any ultimatums.” At the same time, however, it announced that “The coalition does not seek to fight Syrian regime, Russian, or pro-regime forces partnered with them, but will not hesitate to defend coalition or partner forces from any threat.” Which raises the question: is the Trump administration prepared if Syrian air defenses targets U.S. planes? How will the administration respond if Iran spurs retaliation on American forces through Shia militias that it backs in both Iraq and Syria? Is the president ready to shoot down Turkish and Russian warplanes if they attack insurgents backed by America? And bear the cost of military retaliation?

War is a real possibility. So far Damascus has responded with words, but if it feels secure in Moscow’s backing it might engage in what would amount to self-defense if attacked by the United States. Downing an American plane would force the administration to decide if it was all out or all in. Iran, too, has yet to respond to America’s strikes on its allies. But Tehran might not be so quiescent if sporadic attacks turn into a sustained campaign—after all, Syria matters far more to neighboring Iran than far away America.

Moreover, the Erdogan government has vociferously criticized U.S. cooperation with Kurdish forces, which it sees as linked with Kurdish separatists in Turkey, which whom Ankara is at war. As his authoritarian government’s relations with Washington have deteriorated, his military has been attacking the Syrian Kurdish militias. Having reestablished strong ties with Russia, Erdogan is unlikely to retreat from his aggressive policy. Indeed, he has effectively used nationalism to his political advantage. He might be prepared for a high-stakes game of geopolitical chicken with America, which is widely disliked by the Turkish people.

Finally, Russia responded by suspending the hotline, or “deconfliction” channel, used to avoid inadvertent aerial confrontations, and threatening to track U.S. planes operating in Syria. What if Moscow takes over bombing runs on America’s “coalition or partner forces” in the name of fighting “terrorists?” Shooting down a Russian plane would be an act of war, an aggressive act with no basis in international law or American interest. And it almost certainly would trigger retaliation, whether against U.S. forces directly or America’s rebel friends.

Such an action would bring the globe’s two biggest nuclear powers to the brink of war. If they started shooting at one another the situation would be far more dangerous than it was during the Cuban missile crisis, when Moscow and Washington merely threatened to shoot at one another. Moreover, then, at least, America had significant security interests at stake. It has nothing comparable in Syria.

Maybe the water in Washington, D.C. just turns policymakers mad. The United States has consistently botched its Mideast policy: intervening in Iran, backing Iraq versus Iran, giving Israel a blank check, intervening in Lebanon, embracing the Gulf royals, supporting Egyptian tyranny, blowing up Iraq, creating chaos in Libya, taking over the fight against ISIS, backing Saudi aggression in Yemen and supporting Riyadh’s self-serving attack on neighbor Qatar. None of these have turned or will turn out well.