America May Encounter Another Mao in China 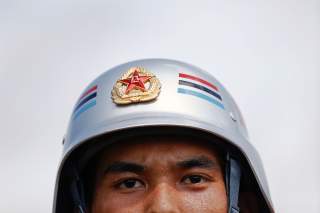 Next year marks the seventieth anniversary of the founding of the People’s Republic of China (PRC). Mao Zedong and his fellow revolutionaries made a new state, proud and independent. It was also authoritarian and murderous. That era seemed over, but oppression with totalitarian overtones has returned to the PRC. What should America do?

China’s history is long and tortured. Once a great empire that dominated its neighbors, it turned inward, falling behind both its neighbors and more distant Western powers. The dynasty stagnated and was humiliated by outsiders. The overthrow of the Manchus in 1911 and rise of Sun Yat-sen offered hope, but the nominal republic suffered through warlord conflicts, Japanese invasion and civil war. There was much to criticize in the rule of Chiang Kai-shek, but his flaws paled compared to those of Mao Zedong, the revolutionary who came to dominate life in the world’s most populous country.

In Tiananmen Square on October 1, 1949, Mao proclaimed the establishment of the People’s Republic of China: “We have stood up.” The Communists became the new elite, with the leadership taking up residence in Zhongnanhai, a well-guarded compound next to the ancient Forbidden City, home to the emperors.

Early during his reign, Mao orchestrated campaigns against “landlords” and other “counterrevolutionaries,” murdered as many as five million people—perhaps more—and sent millions more to labor camps. In 1956 Mao launched the Hundred Flowers Campaign, which offered Chinese an opportunity to speak freely: “let a hundred flowers bloom,” he said. However, Mao soon tired of criticism and began the repressive Anti-Rightist Movement, punctuated by widespread executions, perhaps reaching the millions.

Barely a year after the PRC’s formation, Mao pressed for Beijing’s intervention in the Korean War, which sacrificed perhaps 200,000 Chinese lives, including Mao’s son, to save the Kim dynasty.

In 1958 came the “Great Leap Forward,” intended to rapidly industrialize China. With food diverted to the cities and overseas for export, people in the provinces starved to death. Those who resisted were arrested, tortured and sometimes killed. After losing influence, in 1966 he launched the Proletarian Cultural Revolution against his enemies: the result was a xenophobic power struggle/civil war which consumed many of his old colleagues while leaving an entire generation without education or skills.

Estimates of the total number who died under the man known as the “Red Emperor” range between thirty-five million and an astounding 100 million people. While he did not intend many of these deaths, his policies created the human horror.

Only his death in 1976 finally freed the Chinese people. Economic reform soon followed, with perhaps the greatest reduction in poverty in such a short time in human history. Although there remain great wealth gaps between regions, even rural residents live far better than their parents. And despite significant challenges—heavily indebted banks, bloated state enterprises, skewed aging demographics, politicized government investments—the PRC is likely to continue growing, though no longer at the breakneck speed of recent times.

Moreover, personal autonomy greatly expanded. On so many decisions once controlled by the state, people are free to live their lives, outside of politics, anyway. Even foreigners, with a few important exceptions, are free to gain a visa, purchase a plane ticket, enter the PRC, fly to a distant city, book a hotel room, purchase PRC products, sell Western goods and engage Chinese citizens. I’ve found entering China to be easier than returning to America—Chinese officials have never searched my computer or luggage, in contrast to U.S. border agents.

Finally, the intellectual atmosphere relaxed. Academic cooperation increased, students criticized censorship, liberal Chinese groups held conferences, VPNs skirted internet controls and more. Political opposition was verboten, but the Chinese Communist Party (CCP) had little credibility. It was filled with opportunists, criticized by leftist cadres and riven with corruption. While democracy was not impending, there was hope that Western contacts, economic development and increased wealth would lead to a steadily freer Chinese society. The exact endpoint was less important than steadily increasing individual space outside of state control.

Not that this would eliminate the geopolitical challenge posed by Beijing. Many of the young, whatever their views of internet controls and Western culture, are rabid nationalists. They aren’t inclined to be lectured by the West and believe eternal China owns the South China Sea, Taiwan and more. Indeed, a democratic China could be more susceptible to nationalist public passions. But this worry seemed to lie far in the future.

Then along came Xi Jinping.

He has oft been compared to Mao Zedong, in terms of the power that he has amassed. But more important is his role as the anti-Gorbachev and even anti-Xiaoping. Increasing his personal authority is an obvious priority. But so is empowering the state. Almost across the board his government has assaulted intellectual freedom, internet access, religious liberty, foreign business and economic autonomy. These attacks are also evident in Hong Kong, once promised legal autonomy, and even against Taiwan, with a recent upsurge in threats and intimidating behavior. Perhaps most unsettling is the attempt to create a totalitarian system of surveillance and social control. It is Maoism reborn through hi-tech wizardry rather than old-fashioned informers and block captains.

President Xi may ultimately fail in his attempt to remake the PRC. His politically drive anticorruption campaign has created more than a few enemies. Many are fearful of being targeted next; at some point Xi may face a significant party challenge. The Chinese people also may grow more restive as they grow wealthier: the CCP has lost any moral claim to leadership, and raw power can go only so far so long.

Still, it seems naïve to imagine that China is destined to evolve in a more liberal direction. Which means America is likely to face a wealthier and more authoritarian China controlled by a president setting a consciously anti-Western course. As the Trump administration recognized in its latest National Security Strategy, the PRC looks more like competitor than collaborator. If so, then what?

That doesn’t mean Beijing poses a direct military threat. Historically China’s reach has been limited and there’s no evidence that the PRC as yet has global military ambitions. Moreover, it is encircled by potential adversaries: India, Russia, South Korea, Japan and Vietnam, all of which have been at war with China in the recent past. Finally, America possesses a significant military lead and will easily preserve the capability to deter the PRC from any aggressive moves on U.S. territory.

Even China’s apparent economic gains are less than they appear. Beijing, like the “Ugly American” of the Cold War, has found Africa to be tough going. The Belt and Road Initiative faces a multitude of challenges. Pursuing politically driven projects with poor, inefficient and corrupt governments around the world is a prescription for expensive failure. And the harder the PRC pushes, the more nations shove back, most notably in its own neighborhood, as Southeast Asian nations increasingly welcome Indian and Japanese military involvement.

Nevertheless, Washington cannot ignore the transformation taking place within China. While America’s influence over the PRC’s internal affairs is extremely limited, it would benefit from a more liberal Chinese society. Trade provides Americans with enormous economic benefits, but Chinese investment, even in civilian industries, raises increased concerns with Beijing appearing to consciously target liberal democracy. It is imperative for Washington to avoid war—the PRC would be no pushover, and even if the United States won the first conflict, the latter would be only the first one. A la Germany a century ago, nationalistic Chinese would likely be energized to initiate another round. Yet how to encourage the PRC’s often fractious neighbors to cooperate to constrain what threatens to be an overwhelming superpower?

U.S. policy must evolve. One of the only certainties is the importance of not treating the Chinese people as enemies. However, with events in the PRC moving dramatically in the wrong direction, Washington should consider its response. China remains far freer than it was when the Red Emperor ruled. But how far President Xi intends to go is not evident. The United States may eventually find itself facing a more rational version of Mao ruling a far more powerful China. We should start preparing for that time today.