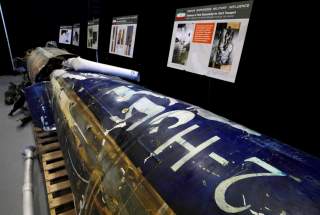 President Donald Trump once was skeptical of the totalitarian dictatorship commonly known as the Kingdom of Saudi Arabia (KSA). He complained, correctly, that Saudis had funded terrorism against America and wondered why the United States subsidized the protection of a wealthy petro-state.

After taking office the president, perhaps affected by abundant flattery judiciously employed by people highly skilled in the art, acted like just another Westerner hired by the Saudi royals to do their bidding. After his visit, highlighted by his uncomfortable participation in the traditional Sword Dance, he added the KSA to America’s pantheon of “special relationships.” Riyadh’s wish seemingly became Washington’s command. The result has been a steady assault on American interests and values.

The West’s relationship with the Kingdom always has been transactional. Abdul Aziz ibn Saud forged the new Saudi nation after the fortuitous collapse of the Ottoman Empire in World War I. The kingdom mattered little until the discovery of oil in 1938. Abundant petroleum won America’s “friendship,” though in the 1970s the Saudis turned their resource into a weapon. Successive presidents have celebrated the bilateral relationship, sometimes with unseemly faux intimacy, even though the two countries shared little other than a desire to keep the oil flowing one way and dollars the other.

The KSA belongs in another age. The country is an absolute, not constitutional, monarchy. Nor is rule based on primogeniture. Rather, until a couple years ago the crown was passed among an ever-aging set of brothers who were sons of ibn Saud. That tended to result in short and decrepit reigns, as well as collegial rule. The benefits of a royal pedigree were substantial; by one count around 7,000 princes shared the nation’s bounty.

The royals long ago made a deal with fundamentalist Wahhabist clergy: the former would enforce social totalitarianism at home in return for the latter teaching obedience to the royals. One result was to create a state perhaps more hostile to Christianity and other non-Muslim faiths than even North Korea. At least the latter hosts a few official churches, presenting a thin veneer of religious diversity.

However, low oil prices and youthful population created increasing strain in the KSA. But hope for reform never was satisfied. Elderly and infirm kings came and died, only to be replaced by even more elderly and infirm rulers.

Now the United States is dealing with a very different personality, the thirty-two-year-old crown prince (and de facto sovereign) Mohammed bin Salman (MbS). In 2015 King Salman assumed the throne and anointed his favorite son as deputy crown prince, then appointed MbS as heir apparent last year, as the current crown prince is known.

The Saudi regime once was cautious and measured, unwilling to let anything disturb the good life enjoyed by royals with few skills other than maneuvering amidst the complex al-Saud family. However, King Salman almost immediately put MbS in charge of the kingdom’s affairs. The latter immediately took his nation in conflicting directions. His government promoted economic opportunity and social modernity, while deepening political repression and seeking military hegemony.

It is a toxic mix that threatens America’s interests in the Middle East.

MbS won a reputation as a reformer by relaxing some of the KSA’s most archaic restrictions, especially on women. These were welcome, long-overdue steps. However, liberty, such as it is, remains limited to personal life. Islam may become looser, but it remains the only acceptable faith. Although the young are invited to choose a more liberal lifestyle, they may not intrude in politics, and certainly not criticize the Saudi “Decider,” as President George W. Bush once anointed himself.

Indeed, MbS turned a rather ramshackle, collegial authoritarian aristocracy into a more traditional personal dictatorship. It is to speed the process of reform, insist the crown prince’s overseas admirers. Yet the ruthless seizure of power, calculated centralization of authority, and brutal shakedown of wealth bode ill for the future. Repackaging what would be viewed as shocking abuses elsewhere cannot sanitize MbS’s rule.

Particularly striking is the ongoing use of the security agencies to arrest and torture high profile members of the hyper-moneyed class to force them to disgorge their assets. This supposed crackdown on “corruption” looks more like the better-armed gang members changing how the loot gets divvied up once the criminal heist is completed. After all, the al-Sauds have no moral claim to their people’s wealth. Which of the elite gets to spend most of it—MBS recently acquired a luxury yacht, French estate and DaVinci painting—is a practical issue of little consequence for average Saudis.

Riyadh’s new foreign policy has been even more problematic. Before MbS claimed kingly authority, Saudi Arabia intervened in Syria on behalf of radical jihadists who pose a far greater threat to the West than ever did the repressive, but secular, Assad regime. Riyadh also intervened militarily to back Bahrain’s Sunni monarchy against the majority Shia population. However, the crown prince is responsible for Saudi Arabia’s worst blunder, launching a brutal, bloody war in neighboring Yemen to reinstall a puppet regime. The long-running domestic Yemeni conflict has turned into an international sectarian war in which at little cost to itself Iran has been able to bleed Saudi Arabia.

MbS also launched last year’s de facto blockade of Qatar, which divided the Gulf—the United Arab Emirates and Bahrain joined Riyadh, while Oman and Kuwait remained neutral—and pushed Doha toward both Iran and Turkey. Although the KSA claimed to be targeting terrorism, historically it has been one of the most important sources of money and people for terrorists, especially those targeting America. President Trump tweeted his support for Riyadh, but the Departments of State and Defense tilted toward Qatar.

More recently MbS invited the Lebanese prime minister to Saudi Arabia, then effectively kidnapped him and forced him to proclaim his resignation. International pressure forced the kingdom to release Saad Hariri, after which he recanted his resignation. The KSA threatened to destroy that nation’s fragile peace in an attempt to weaken the Shia Hezbollah movement, backed by Iran, but ended up strengthening Riyadh’s opponents.

MbS’ pursuit of Mideast hegemony would be antithetical to U.S. interests at most any time. Adding to his recklessness is the fact his primary target is Iran. Admittedly, the latter poses an existential threat to a royal form of government which makes no sense in the modern age. Although Tehran’s Islamic dictatorship begs for a popular revolution, at least the existing Iranian government is based on principle, though highly flawed. People are willing to die for Islam. But for a pampered royal elite which believes itself to be entitled to power, position, wealth, and more? Not so much.

So the crown prince hopes to convince—or, more likely, manipulate—the Trump administration to do Riyadh’s dirty work and attack Iran. Indeed, MbS’s government charged Tehran with alleged committing an act of war by allegedly arming Yemen with missiles which were being fired at Riyadh. The claim was unsupported. Moreover, Saudi Arabia was routinely bombing Yemen, including the capital of Sanaa, and had killed thousands of civilians. Contending that Yemenis had no right to fight back was, well, obscene. Such is the Saudi code of war.

The United States needs to put distance between it and a regime that undermines both U.S. values and interests. Best for America would be rough parity between Iran and Saudi Arabia. Despite fear-mongering promoted by both the Saudi and Israeli governments, Tehran so far poses little threat to anyone, especially the United States.

Iran’s military forces and outlays dramatically trail those of Israel, Saudi Arabia and Turkey. Although Republican politicians routinely tar Tehran as a terrorist regime, Riyadh has done far more to underwrite terrorist movements, which almost always are Sunni rather than Shia. Before President Trump foolishly united much of Iran’s population behind the sectarian Islamist regime, President Barack Obama’s outreach and nuclear agreement had created the possibility of a better future, encouraging a long-term political battle between younger, professional and urban Iranians and discredited if still powerful Islamic fundamentalists.

As for Iran’s alleged geopolitical gains, none impress: greater influence in the political wreckage known as the Assad government; temporary increase in clout with one Yemeni faction in a nation riven by civil war which has never known peace and stability; and maintenance of an indirect role in Lebanon’s badly fractured society through Hezbollah, but with little practical international effect. Most significant may be Iran’s increased clout in Iraq, which, of course, was a gift from George W. Bush, who removed Saddam Hussein from power. That predictably enhanced the role of Iraq’s majority Shia neighbor, in which many of today’s Iraqi elite sheltered during Hussein’s dictatorship. Still, most Iraqis have no interest in being governed by Tehran.

The Trump administration would well start by ending U.S. support for the KSA’s murderous and purposeless war in Yemen. The president should indicate that Saudi Arabia’s efforts would better be directed against any remaining pockets of ISIS fighters. He also should back Secretaries Mattis and Tillerson by criticizing Riyadh’s foolish attempt to turn Qatar into a puppet state. Assuming MbS is serious about battling Islamic extremism, Washington should suggest that the crown prince end his nation’s support for intolerant Wahhabism abroad while doing more to clean up textbooks and sermons at home.