How Washington's Hawkishness Made America a Terror Target 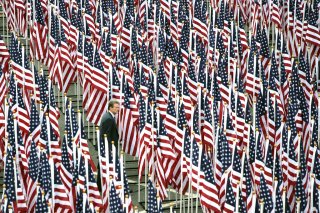 Entering Brazil, like most countries, is simple. The passport line was long, but the process was elementary. No fingerprint taken, no photo made, no questions asked. I had to apply for a visa, but I wasn’t called in for an interview. There was no special vetting.

Put simply, Brazil isn’t afraid of the world. Its politics is messy and it once suffered under a military dictatorship, but it doesn’t appear that anyone overseas means Brazilians ill. Brazil’s government apparently isn’t cowering at the thought of a people visiting or refugees resettling.

Contrast that with the United States. President Donald Trump would never admit it, but fear drives his infamous “travel” restrictions. American officials are afraid of foreigners coming to the United States. Not just from failed states. Not just from nations that years ago may have dallied with terrorists. But also from supposed friendly countries that were “liberated” by American force of arms.

So nervous is the new administration that it is seeking to build a legal wall around the nation, a barrier which would effectively close America off from important parts of the world. Much of the world is in flames, but Brazil enjoys peace and security. Not so in the United States, despite the fact that it has one of the biggest “defense” budgets, possesses a powerful armed forces, maintains the most military bases, deploys the most carrier groups and has the most allies on earth.

Instead of finding peace and security, the United States is fighting the most wars on earth. So President Trump believes that America’s only hope is more rigorous self-isolation. The Trump administration is seeking to dramatically reduce the number of students, business officials, tourists, journalists, refugees and others entering America. The United States appears to be isolated and embattled. That’s a sad course for a country which has long seen itself as being a democratic model, a city on the hill, a light to the world and much more.

Of course, the president justified his executive order in terms of U.S. security. But assume that the administration is right that the only way to protect Americans is to keep lots of foreigners out. It is time Americans seriously asked: why are there so many people who apparently want to kill us?

It’s not because Americans are so free and virtuous. It’s not because others are jealous of our achievements. Nor is it because the religiously extreme view us as apostates and infidels. Undoubtedly there are people who fall into all three categories, but that doesn’t explain the sense of siege the Trump administration perceives. There is nothing obvious that sets the United States apart from Brazil or the many other countries that invite the rest of the world to come without assuming a terrorist deluge threatens.

Of course, many Americans have a wonderful conceit about their nation. Obviously, the United States does and represents much right, which is why the New World draws so many people from around the globe. However, Americans are not so unique as many want to believe.

In fact, if Islamist terrorists want to target godless decadent hedonists, there are many contestants to wear that crown. Plenty of other countries are “free” in ways which offend Islamic radicals. Other nations sit in territory claimed for a new Islamic caliphate. Many other governments treat Muslims worse. None of these—or similar factors—explain why America, rather than Brazil, has to keep visitors at bay.

But there is one very important difference: Washington’s foreign policy. America is far more likely than Brazil to interfere in other nations, support authoritarian movements and governments, bomb other lands, invade other countries, occupy other lands and kill other people.

These days there is one nation that seems to go out of its way to create enemies, stir hostilities, generate anger and make every one of its citizens a terrorist target. Thanks, Uncle Sam.

This international approach goes back for decades. For instance, support for dictatorships and coups against unfriendly leaders were common during the Cold War. But the end of the Cold War freed Washington policymakers to see themselves as masters of the universe, unconstrained by anyone or anything. Then the United States went into overdrive in its inadvertent campaign to create terrorists. Unfortunately, the Trump administration is exacerbating the problem in virtually every aspect.

There is no Cold War anymore, but President Trump appears ready to embrace just about every repressive regime which jails and oppresses its own people. Administration officials are getting all giggly over the Egypt’s new pharaoh, Abdel Fattah el-Sisi, who makes ousted dictator Hosni Mubarak look like a sissy. The administration has been trying to make nice with Turkish sultan wannabe, Recep Tayyip Erdogan, who is attempting to formalize his Putinesque presidency after reigniting the civil war with his nation’s Kurdish residents. Washington also has warmed ties with Bahrain, which has a repressive Sunni monarchy that is backed by Saudi Arabia and holds the Shia majority in bondage.

A case can be made for working with all three regimes, despite their increasing repression. However, abandoning the slightest pretense of caring about the people, as well as the dictators, is not likely to be forgotten. Similar is the impact of the president’s tighter embrace of Israel’s radical Netanyahu government, which seems determined to kill any possibility of a two-state solution, consigning Palestinians to a status akin to that of Sparta’s helots or Apartheid South Africa’s blacks.

Worse, though, is the administration’s apparent intention to intensify every war started or continued by President Barack Obama. The latter twice increased the number of troops in Afghanistan, without securing a competent, efficient and honest democratic government. However, President Trump now appears ready to undertake his own fruitless “surge.”

At least the previous administration felt some embarrassment about the Saudi royals, even as it backed their murderous campaign against Yemenis to reinstate a friendly regime in a nation which has suffered from internal strife for decades. By the end of his term the slaughter of civilians caused President Obama to trim U.S. support. Now, the Trump administration has announced a fulsome embrace of a frankly totalitarian regime. It is denying political and religious liberty at home. It is also killing people who have done nothing to hurt Americans and have been serving Washington’s interest by fighting Al Qaeda.

President Trump ran for office criticizing the Bush administration for its foolish intervention in Iraq, which created chaos in that nation and triggered a bloody sectarian war that destroyed the historic Christian community. The Bush administration also bears responsibility for creating Al Qaeda in Iraq, which morphed into the Islamic State and strengthened Iran. Yet Trump has embraced the Obama campaign against ISIS, supplanting the regional powers, led by Turkey, Saudi Arabia and Jordan, which have the most incentive to destroy the Islamist menace. Indeed, Washington took the lead, and now the Trump administration is intensifying the U.S. military commitment to Syria and talking of a well-nigh permanent presence in Iraq.

This little differs from the policies of his predecessors, which he so sharply criticized. Indeed, he has doubled down on virtually all of them. How many more conflicts does he want to enter? How many more enemies does he want to make? How many antagonisms does he plan to create? It is almost as if President Trump is inviting more terrorist attacks on America, which would only increase public pressure to wall off the United States from the rest of the world.

Nobel laureate Milton Friedman long ago reminded us that there ain’t no such thing as a free lunch. Given America’s foreign policy, it shouldn’t be hard to understand why some people hate the U.S. government and want to do the rest of us harm. That doesn’t justify terrorism, but understanding the root of terrorism should help us better combat it. The starting point of that endeavor should be to stop making so many unnecessary enemies.