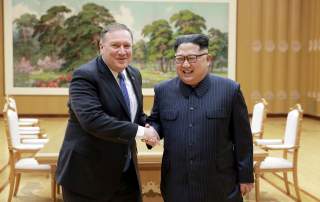 On May 9, Secretary of State Mike Pompeo made his second visit to Pyongyang. He was there presumably to finalize details involving the upcoming summit between American President Donald Trump and North Korea leader Kim Jong-un on June 12 in Singapore. However, the more important mission might have been freeing three Americans in North Korean custody. Their liberation is good news all around. It demonstrates Kim’s skillful foreign policy and gives Trump another win ahead of the summit.

Coming home with Pompeo are businessman Kim Dong-chul, convicted of espionage, and educators Tony Kim and Kim Hak-song, charged with committing of “hostile acts.” Exactly what they did is unclear and certainly did not warrant imprisonment. But the North Koreans take offense at actions, such as evangelism, which Americans consider normal.

The good news also serves a larger political agenda. Even in the Democratic People’s Republic of Korea, Americans are not arrested because they are Americans. Until the administration banned travel to the North last fall, roughly one thousand Americans visited the North every year, almost all, year in and out, without mishap, while other foreigners also languished in North Korean prisoners. However, U.S. citizens have the greatest potential for use as gambit pawns in any global chess game.

Before the tragic imprisonment and death of student Otto Warmbier, the North typically waited for the visit of an important American, including former President Bill Clinton and former Vice President Al Gore in the past, to trigger a prisoner release. Although, over the years everyone eventually came home, the system recently seemed frozen amid the increasing public rancor between the two governments. But the impending summit created an entirely different game.

Freeing the prisoners obviously benefits the Trump administration. But it is even smarter politics for the North.

First, the release eliminates an irritant which could complicate discussions over far more important substantive issues. Of course, America’s president routinely visits nations which hold U.S. citizens for having committed their share of crimes overseas. However, almost everything about North Korea is political, including the arrest of foreigners for offenses that look arbitrary. It is hard to imagine a successful summit without the Americans’ release, so Kim did the deed ahead of time.

Second, freeing the men plays up to President Trump, giving him an obvious “victory” useful for boasting about his superiority over President Barack Obama. Since the president took office foreign governments have considered carefully how to play him. This action also provides him an argument for use against hard-liners who might prefer that the summit fall through, including perhaps his own national security adviser,

Third, sending the prisoners home will reinforce the president’s apparent judgment that Kim is a splendid fellow, who “has really been very open and I think very honorable based on what we are seeing.” Although having the president praise a country’s president does not guarantee kid-glove treatment for that country—administration policy toward both China and Russia is harsher than the president’s rhetoric about their presidents—winning President Trump over certainly is a useful step, especially when he already has invested a lot in the summit.

Fourth, releasing the three Americans projects a moderate image for Kim globally. His turnaround from threatening to drop missiles to instead playing international statesman could not be more dramatic. Kim’s changed rhetoric and behavior already has paid dividends with South Korean public opinion. It is likely to have a similar impact in America, where the public and media are already hopeful and excited about the inter-Korea summit and the upcoming Trump-Kim meeting. Last year President Trump could talk about possible war in Korea based on the caricature of Kim and North Korea that Americans saw at the time. Yet Kim continues to dismantle that image.

Fifth, tying the men’s liberation to the summit further invests the president in the meeting’s success. From President Trump’s perspective, if the mere prospect of a conversation frees prisoners who had been jailed for years, seemingly without hope, then imagine what might be achieved the summit. Better for Kim that President Trump becomes inclined to take whatever occurs as another element of a continuing success.

So far the administration has been happy to pocket concessions without offering any of its own, but that certainly will come to an end at the summit. President Trump fancies himself a master negotiator, but he never has faced someone quite like Kim, who when dropped into one of the world’s worst political snake pits at the age of twenty-seven, managed to eliminate a gaggle of more experienced and desperate rivals. Instead of tweeting, Kim orders executions and assassinations. He is not going to sell his rule cheaply.

However, a proportional reward and inexpensive indication from the president that America is prepared to deal would be eliminating the administration’s ban on Americans traveling to the North. That would clearly signal that Washington sees a different attitude in Pyongyang and is looking toward a warmer future.

The ban was imposed mostly to limit tourism, even though none of the three released Americans were tourists. Warmbier was, but his case, though horrid, was rare. Much of the fault appeared to lie with the group, Young Pioneer Tours, which organized his trip and was reported by the British press to have engaged in disturbing behavior. When visiting North Korea last June I spoke with the head of a humanitarian group who investigated the roughly fourteen cases of Americans who had been arrested in recent years. She commented that none were detained without cause in the sense that they broke North Korean rules. Clearly, those violations didn’t warrant such punishment, but there are plenty of other countries in which visitors also need to be cautious about breaking local laws.

Moreover, any kind of détente will require Americans to visit, not just for leisure, but for business, to teach, or as humanitarian workers, journalists, and policy analysts. I’ve gone twice in the last capacity and learned much. In turn, foreigners educate North Koreans and by their very presence refute regime propaganda. The best hope for peaceful transformation of the North will be from the inside. For this reason, the greater the foreign contact the better chance such change will happen.

North Korea’s release of the three Americans most obviously benefits them. Even though the immediate political gains go to the Trump administration, Kim Jong-un expects his gambit to yield significant benefits when the real negotiations get underway. So far the seeming amateur in Pyongyang is playing the diplomacy game like a seasoned professional.