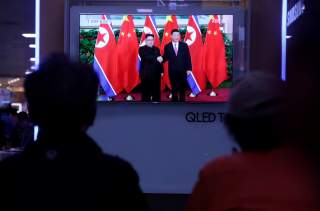 Lest anyone imagine that Kim Jong-un is an international ingénue, consider how well he played the People’s Republic of China. Long on Beijing’s as well as Washington’s naughty list, North Korea forced the PRC to come calling, finally inviting Kim to visit more than six years after he took power.

Two months later Kim made a second visit, and this one to the northern city of Dalian rather than more distant Beijing. He explains that he came to “strengthen strategic communication” with China’s President Xi Jinping. Did the latter promise additional support to keep the PRC involved?

For years U.S. policymakers imagined that the Democratic People’s Republic of Korea was a puppet of China. In their mind, Beijing was targeting America with the DPRK. Their solution was to threaten the PRC unless it called off the North Koreans. If only the world was so simple.

In fact, the two countries, far from being “as close as teeth and lips,” as commonly said, were at best frenemies. Their differences go back to the Korean War: the North’s Kim Il-sung may have expected a quick victory when he launched an invasion of the Republic of Korea in June 1950, but American intervention reversed the flow of combat. U.S./UN forces captured Pyongyang and marched north. As the DPRK’s defeat loomed, Chinese “volunteers” pushed back the allied forces, again transforming the war, which two and a half years later ended in stalemate.

China suffered hundreds of thousands of casualties to keep Kim in power; Mao Zedong’s son is buried in the DPRK. Yet Kim demonstrated little gratitude for the “fraternal assistance.” Indeed, when I visited the Victorious Fatherland War Museum in Pyongyang last year, I saw no mention of the PRC’s contribution.

Kim zealously guarded his nation’s independence. On his march to absolute power he destroyed both the pro-Russian and pro-Chinese factions of the Korean Worker’s Party. He ignored Beijing’s protests. Relations worsened as Mao criticized the plan to turn the DPRK into a de facto monarchy, with Kim’s son, Kim Jong-il, chosen as heir apparent.

Contra the claim that Beijing was using North Korea, the PRC was highly displeased with Pyongyang’s nuclear program. China wanted a docile client state on its border to provide a stable buffer. The DPRK is anything but pliable. Even before President Donald Trump pushed China to do more, an irritated Beijing was steadily tightening sanctions and increasing enforcement.

The PRC desired both denuclearization and stability. However, the harder it pushed the former, the less likely it was to get the latter. North Korea was increasingly seen as an ungrateful liability. Indeed, the DPRK became an object of contempt on Chinese social media; “Fatty Kim” was one of Kim Jong-un’s uncomplimentary nicknames. Academics argued for dropping Pyongyang as a client.

Even China’s government put distance between the two countries. The PRC downgraded official contact with Pyongyang. While ignoring Kim, Xi met at least six times with South Korea’s President Park Geun-hye, even according her a place of honor at the 2015 parade celebrating the conclusion of World War II.

Pyongyang responded with vitriolic public criticism of the PRC. The DPRK sometimes appeared to schedule its missile and nuclear tests on important Chinese dates to spite Beijing.

When I visited North Korea last year, officials indicated their desire not to be dependent on “any single country.”

Kim’s execution of his uncle, Jang Song-thaek, reflected at least in part the latter’s role as the DPRK’s chief interlocutor with China; the list of charges against him included the “selling of precious resources of the country at cheap prices” and "committing such act of treachery” as selling off land “to a foreign country.” Kim’s apparent assassination of his half-brother probably reflected fear that the PRC might attempt to use Kim Jong-nam, who lived in Macau under Chinese protection, as front man in a more pliant regime.

By the end of last year the two countries had little political and fast diminishing economic contact.

However, Kim’s international pirouette changed everything. No doubt, Beijing was happy to see its supposed client turn toward diplomacy. But the Chinese leadership got more than it desired: rather than resumption of the Six-Party Talks, or some other international forum which included the PRC, Kim threatened to build exclusive bilateral relationships with the PRC’s most important rival and one of that rival’s chief allies.

A “grand bargain” with the United States could result in a complete volte-face for the North, with Pyongyang looking to America for both economic aid and security assurances. Worse, from Beijing’s viewpoint, such an agreement could presage reunification, with the creation of a united Korea allied with America and the hosting of U.S. troops on China’s border. Zhang Baohui of Hong Kong’s Lingnan University posited a possible “major realignment” in Northeast Asia.

Chinese policymakers and analysts know that the odds remain against such a transformation, but the mere possibility makes Beijing nervous. After all, the PRC enjoyed the benefits of a buffer state along the Yalu for more than seven decades. Nevertheless, in the midst of potentially dramatic geopolitical changes, the PRC is largely out of action.

Kim has gained equal international stature with Xi, is meeting with South Korea’s Moon Jae-in and preparing to meet with President Trump. Kim will be negotiating the region’s future without Xi’s presence. Rumors that Pyongyang will not demand the withdrawal of American troops from the South, long China’s as well as the DPRK’s objective, may be intended as a not so subtle warning to Beijing.

All of which apparently encouraged the Xi government to show interest in its small ally. Xi reportedly accepted an invitation to visit Pyongyang. A senior Chinese envoy went to the North after the Kim-Xi summit and received a warm welcome. China’s foreign minister followed in early May; the first trip by a Chinese foreign minister in eleven years. Moreover, there are reports that cross-border commerce has picked up, perhaps reflecting more relaxed Chinese enforcement.

Of course, the PRC’s friendlier attitude gives Kim a boost in advance of the latter’s meeting with President Trump. While it’s hard to imagine a bidding war over Pyongyang’s allegiance, China’s renewed warmth reduces pressure on Kim to make more concessions more quickly. Kim declared his desire “to elevate the traditional friendship to a new level of development meeting new demands of the times.” China’s foreign minister expressed his country’s wish to “increase coordination” and “play a positive role in seeking a political solution to the Korean peninsula issue.”

Skepticism is warranted over Kim’s willingness to bargain away North Korea’s nuclear weapons, and at a price acceptable to Washington. Nor is it possible to foresee what the Kim-Trump summit will deliver. The upcoming summit will be a rare unscripted moment for the two national leaders, full of promise and peril.

However, so far Kim has proved to be adept on the international stage. He has overhauled the DPRK’s demonic image, changed his reputation from embarrassing caricature to charming statesman, flipped South Korean public opinion, and forced Washington to treat him and his nation as equals. He also forced his dominating neighbor and nominal ally to come calling—twice. Whatever happens next, Kim has transformed Northeast Asia.