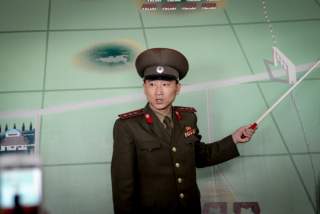 The Korean War ended more than 62 years ago, but not really. The warring parties only agreed to an armistice. Technically everyone still is at war.

Of course, no one wants to start fighting again. Not even the Democratic People’s Republic of Korea, which would lose badly since its erstwhile ally China wouldn’t again intervene to save the North.

Indeed, North Korea has proposed negotiations over a formal peace treaty. In October Foreign Minister Ri Su-yong used the UN as a platform to urge the U.S. and DPRK to agree to a treaty ending the conflict. North Korean television reiterated the call a few days later.

In the past Pyongyang’s proposals appeared pro forma. But now might be different. Cha Du-hyeogn, national security adviser to the previous South Korean president, suggested that the repetition was “a possible sign that North Korea is serious about holding a conversation with U.S.”

Washington’s official position is that a peace treaty is possible only when the North “takes irreversible steps toward denuclearization.” Which likely is never. Instead, the Obama administration should respond yes, proposing a time and place. Let the talks begin.

Of course, no one should have any illusions about how smoothly such a process is likely to go. Or how much practical difference a signed piece of paper would make so long as the DPRK maintains oversize military forces in advanced attacking positions along the Demilitarized Zone. Or whether the North would follow a peace treaty with an agreement limiting conventional or nuclear arms.

Nevertheless, the advantages of talking are several.

First, the status quo benefits no one, especially the U.S. Three recent article headlines ran: “South Korea, U.S. Write Plan to Combat Guerrilla Warfare Waged by Pyongyang,” “U.S. Says Ready to Defend Against North Korean Nuclear Threat,” and “U.S. Bolsters Missile Defense with N. Korea in Mind.” America is greatly concerned about the DPRK, but only because Washington still is involved in the peninsula as a potential combatant defending the South. The U.S. had geopolitical and security reasons growing out of the Cold War to intervene in 1953. It has no such reasons today.

Second, Pyongyang is better behaved when involved in negotiations. Exactly why is hard to fathom. After all, preparing to fight in order to talk seems a bit odd. But the mere act of negotiating seems to reduce the likelihood of military confrontation. So talk.

Third, formally ending America’s role in a war that occurred decades ago would naturally lead to U.S. discussions with South Korea about turning its defense over to the Republic of Korea. The ROK has advanced far; there is no reason it should always be militarily dependent on America. The South’s many advantages, starting with an economy some 40 times as big as that of the North, a population twice as large, and a far stronger international presence, makes it time to reconsider America’s security guarantee and military garrison.

Fourth, engaging the DPRK would satisfy a key Chinese suggestion (approaching demand): reduce the threat environment facing the North, which Beijing assumes is driving North Korea to develop nuclear weapons. There’s almost certainly more to Pyongyang’s program—a desire for attention and respect; determination to defend against anyone, including, possibly, the People’s Republic of China; and commitment to reward the military for political reliability. Nevertheless, the North demonstrates that even paranoids sometimes have enemies, and is unlikely to disarm so long as it perceives itself as at war with the U.S.

Fifth, by engaging the DPRK, whatever the consequences, Washington could push Beijing to apply real pressure on North Korea to at least moderate its behavior if not disarm. Negotiations with Pyongyang would offer a practical test of the North’s intentions. Is it serious about using a peace treaty to improve relations or would talks merely provide an opportunity for further extortionate demands? Experience suggests the latter, but changes are afoot up north, including expanded private markets and increased push for foreign investment. In either case, if Washington acts on the PRC’s proposal, the former can ask Beijing for assistance in return.

Sixth, formally ending the war simply makes sense. The armistice, signed on June 27, 1953, was intended to “insure a complete cessation of hostilities and of all acts of armed force in Korea until a final peaceful settlement is achieved.” It hasn’t worked perfectly, with sporadic flare-ups, most recently two South Korean soldiers injured by a land mine last August. Nevertheless, broadly speaking, peace has survived. After 62 years it is time to turn the “temporary” armistice into a permanent treaty.

What are the arguments against doing so? One is that the North wants to leave the South on the side, like an illegitimate puppet of Washington. America should inform Pyongyang that the latter won’t get very far without engaging South Korea, which is a treaty ally of the U.S. Anyway, with its greater economic and other advantages, the ROK could easily overmatch North Korea militarily even without American support. With the South and DPRK already preparing for bilateral talks later in December, Seoul could suggest including discussion of a peace treaty.

The second objection is that Pyongyang is unlikely to live up to any agreement. However, through three generations the Kim dynasty has followed the armistice’s essentials: no full-scale war. That isn’t likely to change. (The North formally renounced the agreement in 1994, 1996, 2003, 2006, 2009, and 2013 without practical consequence.) Moreover, Kim Jong-un has emphasized economic development as a broader, wealthier elite has developed. He therefore has more incentive to stabilize his nation. The PRC might be able to help ensure that a peace treaty ends up acting like a peace treaty.

In the long-run North Korea might abandon its nuclear weapons, satisfying the Obama administration’s condition for negotiating. But as Lord John Maynard Keynes famously noted, in the long-run we are all dead. Pyongyang says it wants to negotiate a peace treaty. Let’s negotiate. The worst that can happen is nothing. Maybe, just maybe, something positive might occur. But it won’t if we don’t try.

Doug Bandow is the Senior Fellow and former Special Assistant to President Ronald Reagan.  He is the author of Tripwire: Korea and U.S. Foreign Policy in a Changed World and co-author of The Korean Conundrum: America's Troubled Relations with North and South Korea