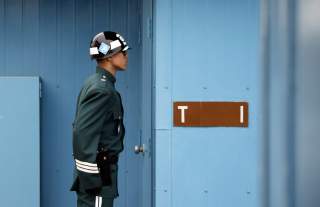 The prospect of a summit between President Donald Trump and North Korean supreme leader Kim Jong-un offers a unique opportunity to move Northeast Asia away from more than seven decades of confrontation and conflict. But the meeting might be stillborn or end badly, even if it does occur.

An important challenge is the difference between the two leaders’ official expectations. The Trump administration presumably believes it has a commitment by Pyongyang to denuclearize. However, Kim, to the extent that he genuinely contemplates abandoning weapons so expensively acquired and so tightly connected to his own legitimacy, is likely willing to do so only over time, and in return for concessions that enhance his regime’s survivability. When I visited the North last year, officials well remembered the fate of Libya’s Muammar el-Qaddafi, who negotiated away his missile and nuclear programs, only to be later ousted by the United States and its European allies.

What might satisfy the Democratic People’s Republic of Korea? The regime’s representatives regularly speak of ending America’s “hostile policy.” During my visit officials also pointed to Washington’s “military threats” and “nuclear threats.” Last July, the Korean Central News Agency reported that Kim said “the DPRK would neither put its nukes and ballistic rockets on the table of negotiations . . . unless the U.S. hostile policy and nuclear threat to the DPRK are definitely terminated.”

In the past, Pyongyang has proposed negotiation of a peace treaty to formally end the conflict, and cancellation of the annual U.S.–South Korean military exercises. Washington could add diplomatic recognition, agree to a nonaggression pact and promise no first use of nuclear weapons. No doubt sanctions would have to end. The DPRK also likely would expect aid, not only from the Republic of Korea, but also from Japan, which accompanied its recognition of the ROK with de facto reparations for its colonial rule. The United States might offer humanitarian assistance as well as support the North’s membership in multilateral development banks.

Still, all of these are essentially paper guarantees. Once North Korea abandons its hard-won deterrent, all it would have in return would be promises. Ukrainians discovered the limited value of Washington’s good wishes in the Budapest Memorandum, signed by the United States, Russia and other governments, after relinquishing nuclear weapons left behind when the Soviet Union dissolved. Moreover, Washington could make additional demands—over human rights and democratic practices, for instance—and threaten to ignore or revoke any guarantees given if Pyongyang did not comply.

Moreover, none of the foregoing provisions would prevent a subsequent attempt at regime change. The DPRK would retain a sizeable but decrepit conventional force; however, no nonnuclear power has been able to stand up against the U.S. military. Washington easily ousted governments in Grenada, Panama, Haiti, Afghanistan and Iraq; imposed a geopolitical settlement on Bosnia; and dismembered Serbia.

Even more, el-Qaddafi’s gruesome fate, recorded for the world to see, illustrated Washington’s willingness to ignore past promises. Indeed, Saddam Hussein could make a similar complaint: the Reagan administration supported him after he invaded Iran and George H. W. Bush’s ambassador in Baghdad indicated that Kuwait’s fate was of little concern in Washington. He didn’t expect to end up on the wrong end of a U.S. invasion.

Moreover, President Trump’s behavior does not give confidence that he would keep his word. Nor would a future president feel it necessary to live up to a deal made by President Trump. After all, he has spent most of his first fourteen months in office repudiating trade agreements made by his predecessors and working to kill the nuclear accord with Iran. He is also threatening to escalate U.S. involvement in Syria, and toyed with military intervention in Venezuela. Incoming secretary of state Mike Pompeo recently hinted that he supported regime change in Pyongyang. How trusting will be the DPRK’s supreme leader, who has been exceedingly ruthless—at least measured by public executions of former aides—in preserving his rule? Probably not very.

China and Russia could offer security guarantees, but the North always maintained its independence from both of its dominating neighbors. Indeed, Kim appears sensitive to the possibility that his frenemies in Beijing might want to replace him: in 2013 he executed his uncle, who was the regime’s chief interlocutor with China, and last year he presumably ordered the execution of his half brother, who could have been used by Beijing as the frontman for a more docile regime. Kim might prefer not to rely on a potentially overbearing China for protection.

Instead, Kim could demand more from the administration—most likely the end of Washington’s alliance with the South and removal of U.S. troops from the peninsula. The North long has denounced the ROK as a puppet regime and insisted that America stay out of Korean affairs. While the United States replies that its force presence is defensive, those troops and bases would be useful in any military action against a weakened DPRK. Indeed, from Pyongyang’s standpoint, withdrawal would seem a reasonable price for yielding both nukes and long-range missiles.

However, the possibility of North Korea making such a demand worries some Korea analysts. For instance, Thomas Wright of the Brookings Institution complained that doing so would trade away “one of America’s most important alliances” and “signal that the United States cares little for its friends and is only concerned about direct threats to the homeland.”

Yet the alliance is important primarily to the extent that it advances America’s security, not to the extent that it subsidizes one of America’s many prosperous and populous defense clients. And direct threats to the American homeland are precisely the dangers against which Washington should be most alert, since they matter far more than threats against friendly nations, especially those able to defend themselves.

Before negotiations begin, Washington decisionmakers should ponder their priorities. Which is more important, getting rid of North Korea’s nuclear weapons or keeping U.S. forces on the peninsula? Administration officials might wish to do both. And maybe it will be possible to do so.

But an American withdrawal would be the single most effective step to reduce the likelihood of a future U.S. attempt at regime coercion or change. And that would be the best way to fulfill Kim’s reported condition for denuclearization, that “the military threat to the North was eliminated and its security guaranteed.”

Obviously, the United States would retain substantial military assets aground and afloat elsewhere in the region. (Kim conceivably could insist that American troops leave the region entirely and even that the United States, China and Russia also denuclearize, a possibility suggested by one of my interlocutors in Pyongyang. But this would move beyond the realm of the possible, as Pyongyang would know. That would demonstrate that Kim was not serious about negotiation.)

Nevertheless, backing away militarily would symbolically turn the region’s future over to its members. It would be harder for an American president to make the case for military action if there was little connection, let alone threat, to America. While the United States could intervene without an alliance, there would be neither a treaty commitment to ensure attention nor a troop trip wire to trigger action.

If Pyongyang makes such a demand, the answer should be a quick and easy yes. If genuine détente befell the peninsula, why should Washington’s forces stay? The alliance was created in 1953 to preserve a war-ravaged ROK during the Cold War from North Korea, backed by the barely post-Stalin Soviet Union and Maoist China. That world disappeared long ago.

Seoul is well able to defend itself. The South possesses upwards of forty-five times the North’s GDP, and twice the population. South Korea’s military is better trained and equipped, and could be expanded as necessary to ensure its ability to deter and defeat any DPRK attack. The only serious argument for a continued American military presence is the North’s nuclear arsenal. (In fact, Washington’s nuclear umbrella does not require a conventional presence on the peninsula.)

If the North does denuclearize, then the United States should bring home its forces as a matter of course. If proposing withdrawal would be useful in achieving denuclearization, then the card should be played during negotiations. After all, the overriding objective is to eliminate a potential North Korean attack on the American homeland.

Indeed, the DPRK’s ability to strike U.S. cities would force Washington to rethink its commitment to the ROK in any case. There is nothing at stake in Korea that would justify risking mass death and destruction in America. Better than being forced to back away, the administration should offer to leave in order to preclude the clear and present danger.

Nevertheless, an unnamed administration official told Reuters that if the North brings up the withdrawal of U.S. forces, “things could get ugly quickly despite the summit.” Instead, the aide hoped they would “present something more realistic.” Naoko Aoki of the University of Maryland similarly asserted that this demand would be “a nonstarter for the United States.”

Why isn’t withdrawal a realistic option? Indeed, the president seems in sympathy with this view. In mid-March, he complained, “We have a very big trade deficit with them, and we protect them.” In his view, the United States was losing money on both trade and “the military,” with “32,000 soldiers on the border between North and South Korea. Let’s see what happens.” Although the White House said the president was not proposing to remove the troops, that would be the logical response. It certainly would make no sense to keep losing money on “the military” if the South no longer needed defending.