Peace in Our Time on the Korean Peninsula? 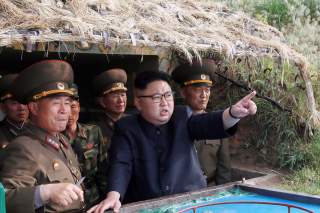 South Korean officials declared that the Democratic People’s Republic of Korea is prepared to negotiate with the United States over denuclearizing the peninsula and normalizing relations. President Donald Trump declared his policy is working.

The first is good news, if true. But even if true, it is merely the first step to achieving a stable peace in Northeast Asia.

The second probably is not true. Any talks are likely to be conducted on North Korea’s rather than America’s terms. Almost certainly Pyongyang will still possess its current arsenal of twenty or more nuclear weapons when this year comes to a close. And the next year as well.

The South Koreans who met with Kim and his officials suggest that peace is in the air. The DPRK wants dialogue and is prepared to denuclearize. Just a few steps further and the lion will lie down with the lamb, ending more than seventy years of intra-Korean conflict.

However, so far, Kim Jong-un has not spoken. It is obvious what visiting South Koreans wanted to hear. Kim may have told them what they wanted to hear. But what will he say to the world, and especially the United States? Just after Seoul’s announcement the Workers’ Party of Korea official newspaper justified Pyongyang’s possession of nuclear weapons. “The peace and security of the Korean Peninsula, Northeast Asia and the world have been secured thanks to our strengthening of nuclear deterrence,” declared the Rodung Sinmun. Maybe that just indicates that Pyongyang intends to strike a hard bargain. But even that is an important corrective to optimistic assessments of DPRK policy. We won’t really know the North’s position until North Korea’s Supreme Leader responds.

Moreover, there’s nothing particularly new in Pyongyang’s presumed offer. In the past North Korea has engaged the United States in a dialogue over denuclearization. But that did not mean the North was willing to abandon its weapons—or at least to do so in return for what Washington was willing to give. The reason there have been no recent talks, whatever back channel communication might have occurred, is because the Trump administration insisted that the North agree to the main contested issue beforehand: denuclearization.

Indicating a theoretical willingness to disarm is not the same. When I visited Pyongyang last year North Korean officials told me they were willing to consider yielding up their weapons if the United States, China, Russia and other nuclear states did likewise. Under these conditions the willingness to denuclearize is theoretical only.

Now the DPRK apparently says it wants sufficient security guarantees. What would they be? Pyongyang might, and seems likely to, demand far more than what Washington is willing to give. In the past the North demanded that America end the alliance with the Republic of Korea and withdraw U.S. troops from the region. Perhaps there will be other conditions as well.

This would not be simple duplicity, though North Korea obviously is capable of such. And using negotiations to divide Washington and Seoul and gain time to continue missile and nuclear development are time-honored DPRK strategies.

Nevertheless, what rational dictator on Washington’s naughty list would trust the Trump administration and its successors? Presidents Ronald Reagan, George W. Bush and Bill Clinton took out or forced out nearby regimes not to America’s liking. President George W. Bush ventured further afield, forcing regime change in Afghanistan and Iraq, targeting the DPRK as a member of the “Axis of Evil,” and announcing that he “loathed” the North’s ruler, Kim Jong-il.

President Barack Obama engineered the ouster of Libya’s Muammar el-Qaddafi after the latter negotiated away his nuclear weapons and missiles. The Obama administration also spent several years unsuccessfully attempting to oust Syria’s Bashar al-Assad. President Donald Trump has repudiated the agreement reached between his predecessor and Iran, dismissed the diplomatic efforts of his secretary of state, and threatened to unleash “fire and fury” on the North. Only nuclear weapons seem capable of deterring this type of aggression from a future U.S. president. Kim is unlikely to accept expressions of good will and paper guarantees as sufficient to abandon the weapons that his nation has worked so hard to develop.

Finally, Pyongyang long desired talks with America, but without preconditions. The North Koreans reportedly told their ROK counterparts that they simply “wanted to be treated like a serious dialogue partner.” It appears that Pyongyang has simply repackaged a long-standing objective—being treated with respect by the globe’s superpower.

Will the Trump administration agree? Discussions between the United States, the Republic of Korea, and Japan impend, and an anonymous Trump administration official insisted that Washington’s policy “will not change until we see credible moves toward denuclearization.” He also dismissed entering into talks encumbered by “non-starter conditions” by the DPRK as in the past. However, the North is a good enough negotiator not to abandon its leverage without receiving anything in return. And it can simply move its conditions one step back, from agreeing to negotiate to agreeing to disarm.

Even if the administration is dissatisfied it will find it difficult to reject talks with the North for failing to meet Washington’s conditions. The ROK will put strong pressure on the United States to respond to what is being presented as a possible breakthrough. And if the administration does sit down with the North, America will have given Pyongyang what the latter long desired, bilateral negotiations without promising to yield its nuclear weapons. Indeed, the South Korean report indicated that Kim wanted to discuss bilateral relations as well as nuclear weapons. No doubt, North Korean officials would push to lead with the former which, after all, affects the “hostile policy” which they argue has made nuclear weapons necessary. At relatively minor cost—appearing reasonable and peaceable—Kim Jong-un then would fulfill his diplomatic objective, despite Washington’s past year of rejection.

In short, it is not at all clear that much of anything has been changed. President Trump’s fulminations and threats may have forced Kim Jong-un to be more creative, but they have not likely forced the latter to capitulate.

Nevertheless, despite such caveats, the prospect of negotiations offers a way out of today’s crisis. The Trump administration is threatening to start the Second Korean War and legislators like Sen. Lindsey Graham are egging on the president, arguing that such a conflict would be a good deal in the long-term. In fact, almost any alternative is better than preventive war. And creating an ongoing dialogue between Pyongyang and both Seoul and the United States would make resort to military action much more difficult.

After having helped keep the peace for sixty-five years, it would be foolish beyond measure for the administration to risk triggering another massive conflict on the peninsula, especially one which could lead to a nuclear exchange. Kim is unlikely to tolerate U.S. attacks aimed at destroying the regime’s most important weapons and perhaps the regime itself without responding. And America’s conventional preponderance would encourage Pyongyang to “use it or lose it,” which could mean attacks by missiles topped with biological, chemical and nuclear weapons. Japan, as well as South Korea, would be at great risk, and the harm could extend into China and Russia. Many Americans, civilians living in the south and military personnel sent to defeat and conquer the North, would die as well.

The DPRK long has been the land of second-best options. But Washington should use the prospect of talks to develop a plausible alternative to war or a nuclear North Korea. The United States should work with South Korea and Japan to develop a common denuclearization offer for the DPRK and then seek China’s backing for the plan. This offer should include America’s willingness to reduce and remove its military presence. Additionally, America should be willing to turn over to its allies defense responsibility for South Korea and the region to the ROK. It is not in America’s interest to remain permanently entangled in the conflicts of other nations or to turn the Pentagon into a welfare agency. Equally important, friendly states should not be allowed to become permanent welfare dependents.

Denuclearization should remain Washington’s long-term objective. In the meantime, the United States also should pursue other advantageous (and possibly short-term) goals, such as freezing North Korean missile and nuclear development and reducing the conventional military threat against the South. And as in the past, policymakers should consider creative options if such efforts reach a dead end. Among those creative options should be the possibility of shifting nuclear deterrence from the United States to South Korea, which would reduce risks to America while sharing the North Korean nightmare with China.

Pyongyang’s apparent offer to talk is a gambit in a larger strategy for dealing with America. As such, it is an opportunity, not a breakthrough. The move offers the possibility of gain for both sides. Washington should pursue the apparent opportunity to sit down with North Korea and search for a peaceful exit from the dangerous cul-de-sac into which administration policy has driven.