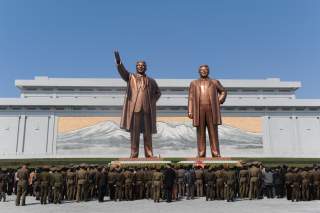 Monarchical Communism thrives in North Korea. Kim Jong-un has passed his fifth anniversary in power. The “Cute Leader,” as the plump thirty-something is informally known, appears to be fully in charge, wandering his country pressing the flesh and giving advice.

Unfortunately, he’s also busy staging missile and nuclear tests. By some estimates, he could have one hundred nukes within four years, making the so-called Democratic People’s Republic of Korea a mid-level nuclear power, on par with Britain, France, India, Israel and Pakistan. No one in the West would be celebrating that “accomplishment.”

President Barack Obama apparently has warned the president-elect about the challenge posed by the DPRK. Indeed, Donald Trump will be the fifth president to confront the prospect of a nuclear North Korea, backed by a front-loaded conventional force able to destroy South Korea’s capital of Seoul, if not conquer the entire country. Few people have any good ideas on how to turn back the North’s nuclear ambitions.

President Bill Clinton once prepared to bomb the North, based on plans developed by then Assistant Secretary of Defense Ash Carter. South Koreans, who would have suffered tens or hundreds of thousands of casualties, depending on Pyongyang’s response, were less enthused about the idea. This approach is even less attractive today: The United States might not even be able to hit all of the North’s nuclear sites, despite triggering the Second Korean War.

Everyone loves sanctions, but so far they haven’t worked. More could be done, but the People’s Republic of China remains unwilling to risk destabilizing its small, unpredictable neighbor. Nor would the Cute Leader necessarily give in even if his country had to pay a much higher price. The regime has a high threshold of pain when common people are the ones doing the suffering—indeed, in the late 1990s, half a million or more North Koreans starved to death without causing Kim’s father to change policy.

Negotiations are great, but only the Easter Bunny and Great Pumpkin imagine that Kim is prepared to give up his nuclear ambitions. Without its nuclear arsenal, the DPRK could not deter the United States, otherwise inclined to impose regime change here, there and most everywhere; extort money and other assistance from neighbors, such as the South; and dominate the news around the world, despite being a small, distant, impoverished and otherwise irrelevant nation.

There’s also the fact that giving the military big toys that go boom helps Kim build domestic political support. That’s an important objective for a dynasty, now on its third generation, which started a disastrous war, impoverished its people, offended its allies, isolated its nation, and become a pariah around the world. Who would want to defend that record? But building big bombs and missiles for the generals helps win their backing.

Finally, virtually everyone, including the president-elect, believes Beijing should simply tell the North to stop. It’s a great idea, except Pyongyang almost certainly wouldn’t listen. And equally likely, the PRC won’t even try. After all, Chinese officials aren’t in the habit of imposing regime change on their allies for Washington’s benefit, especially when the result could be a united Korea allied with America, with U.S. troops on the Chinese border—exactly why the PRC went to war in 1950.

Along the way, there could be Chinese economic investments going up in flames, millions of refugees flooding into China, military factions fighting it out at the PRC’s doorstop, loose nukes going who knows where and other unpredictable fun just across the Yalu River. That would make for a good movie, perhaps a sequel to The Interview. But Beijing would not want to watch it as reality television.

It’s time to try some new tactics, twenty-first-century warfare, so to speak. For instance, though Beijing has banned some of the unflattering names given to Kim Jong-un on Chinese social media (many use a variant of “fatty”), there is a Kim impersonator by the name of Jia Yongtang. He has been working since 2012 and is apparently a good match for the Cute Leader. Jia has a lot of business judging talent contests and the like. In fact, he is so good, he told the Washington Post, “I’m afraid the Americans will come here to kill me. That they’ll think I’m really Kim Jong Un and will come here to kill me.”

The United States can be ham-handed, but that would be a bizarre misfire for the CIA, even on its worst day. However, Washington could hire Jia and drop him in North Korea, perhaps on a military base outside of Pyongyang, to start giving commands. He might order a march on the nation’s capital to depose the “fake” KJU who was desecrating the legacy of the nation’s founder, Great Leader Kim Il-sung. Or announce the end of border controls with the PRC, allowing the population to simply empty into China. Or invite international inspectors into the nearest nuclear facility.

Another possibility would be to find a new, and reliable, missus for the Cute Leader. His wife hasn’t been seen in public for months. One theory is that she’s with child. Another is that she’s had a falling out with Kim’s sister, who reportedly is a rising power. Or Mrs. Kim might be having “irreconcilable differences” with the great man himself.

The latter wouldn’t be good for her health—barely two years after taking power, he executed his uncle, calling him a traitor and various other nasty names. The United States could look for attractive ladies who might serve as potential replacements and drop them into the North where he might meet them on his various inspection tours. Just the right pillow talk and Kim might be ready to surrender to the West, or at least offer Donald Trump the opportunity to build a new golf course.

The defector group Fighters for Free North Korea claims to be testing drones to blow up North Korean statues of Kim Il-sung and his son Kim Jong-il. The regime would treat such actions as attacks on the DPRK’s heritage. That might actually redound to Pyongyang’s advantage. Instead, drones should be programed to drop bird poop on statues of Kim’s dad and granddad. That would treat the national criminals as they deserve, visibly and dramatically, embarrassing Pyongyang. And it’s hard to turn a guano-encased statue into a nationalistic symbol or casus belli.

South Korean organizations use balloons to send propaganda into the North. That causes a near hysterical reaction from Pyongyang, though it’s not clear that many people read, let alone are convinced by, such material. Instead, the United States should orchestrate a campaign that sends the tools of teenage rebellion into North Korea. Cell phones, iPhones, baggy low-hanging pants, baseball caps with instructions to wear them backwards, skateboards, and plenty of MTV DVDs. Chaos would spread across the North and destroy North Korean families and communities. When Kim’s two daughters reach their teens the result would be to end Communism as we know it.

North Korea is a genuine tragedy. Unfortunately, the old policies aren’t working, and are unlikely to perform any better under Donald Trump. But no one knows what to do instead. Rather than doing more of the same and expecting a different result, policymakers should consider adopting the new and the different. After all, the consequences couldn’t be worse than the impact of past attempts.