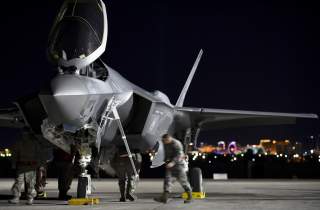 Candidate Donald Trump caused tremors in South Korea when he criticized America’s security commitment. Although far wealthier and more populous than the North, Seoul has grown comfortable being protected by Washington. The possibility of having to do more in their own defense shocked South Koreans who preferred to invest their money elsewhere for fun and profit.

Now Defense Secretary James Mattis has visited the Republic of Korea and offered the usual “reassurances” that American defense welfare will continue. The ROK is safely on the U.S. military dole, so no need to move toward defense independence.

No doubt, South Korean officials were pleased with what they heard. And they should be. Americans, however, should have a different opinion. The upshot is that Washington will continue to risk their lives and squander their wealth protecting a nation able to take over that responsibility.

This lovefest at U.S. expense might come to an end after South Korea’s presidential election later this year. Currently scheduled for December, the poll will be advanced if the ROK’s Constitutional Court upholds the impeachment of President Park Geun-hye. And the winner is likely to be on the left, with promises to improve relations with North Korea, block deployment of the THAAD missile defense, and perhaps even rethink America’s military presence.

The U.S.-ROK alliance is “obsolete” as the president referred to NATO. The former was created at the end of the Korean War in 1953, necessary to protect a ravaged country ruled by an unpopular authoritarian system from conquest by a totalitarian state backed by the Soviet Union and People’s Republic of China. That world is gone.

South Korea has raced past the North and enjoys 40 times the GDP, twice the population, and vastly more foreign friends. Russia’s relationship with Pyongyang is distant; the PRC and Democratic People’s Republic of Korea are frenemies at best. Both Moscow and Beijing do far more business with the South than with the DPRK and would not back the latter in war.

Only in military terms is the North ahead. However, its conventional forces, though larger, are decrepit. Seoul is well able to construct a force capable of deterring and, if necessary, defeating North Korea’s military. It makes no sense for Americans to have to create a bigger military to protect a de facto welfare client capable of creating a larger military for the same purpose.

South Koreans have many excuses for underinvesting in the military. For instance, they devote a larger percentage of their GDP to the military than do Japan, Germany, and most of America’s other defense dependents. True, but irrelevant. Obviously the latter aren’t spending enough either. That doesn’t justify Seoul’s behavior, however.

Moreover, the South faces a far greater threat. Who is threatening Germany, for instance? Berlin could disarm entirely and no one would notice. The ROK actually faces a genuine and dangerous adversary.

The South provides more “host nation support” than other allies. Again true, but the major cost for America is raising additional forces to meet its extra commitments. Unfortunately, Seoul has not offered to pay the cost of recruiting military personnel, purchasing military equipment, organizing units, and more. America should try disarming and offering to pay Seoul for the cost of hosting South Korean units to protect the U.S.

Further, many South Koreans don’t want to spend more on the military. That’s their decision, of course. But it isn’t the job of Americans to borrow more to protect people who don’t believe it is worth their while to protect themselves. “Defend me, or I will surrender” isn’t much of an argument for the alliance.

Pyongyang’s incipient nuclear arsenal—how large and whether deliverable remain unknowns—poses a different kind of threat. So-called “extended deterrence” is a bad deal for America, entangling the U.S. in Northeast Asia’s web of antagonisms and potential conflicts. Some Koreans already are discussing the possibility of creating their own nuclear deterrent, and that might help constrain China as well as the DPRK. It’s a controversial idea, but American policymakers should consider whether the U.S. would be safer exiting the Northeast Asian imbroglio.

In any case, Washington’s garrison in the South does not protect against a DPRK nuclear strike. Rather, putting U.S. forces within easy reach of North Korean WMDs creates thousands of nuclear hostages, making America more vulnerable to Pyongyang, and more reluctant to risk conflict with the North.

Yet Secretary Mattis lathered the outdated relationship with praise. He called the alliance “the linchpin of peace and stability in the Asia-Pacific region” and America’s military guarantee “ironclad.” South Korean officials said Mattis “reaffirmed the United States’ firm defense commitment.”

In other words, never mind President Trump’s stated belief that the South should do more. America’s defense dole is not in doubt. South Koreans can invest their money in their economy while Americans invest their cash in the ROK’s defense. The Northeast Asian “welfare queen” need not worry about having to go to work.

One wonders if the president is aware of what his appointees are doing.

The benefits of this arrangement to the South are obvious. But what do Americans receive in return?

The U.S. borrows more money to take on an additional defense dependent, embroiling itself in the endless, bitter, and unpredictable struggle between the two Koreas, with great powers China and Russia interested and affected. There are three nuclear states in the region, none particularly friendly toward America. It’s an unnecessary geopolitical quagmire.

During the Cold War the Korean peninsula mattered, mostly as part of the larger Cold War struggle with the Soviet Union. However, the U.S.S.R. and Cold War are gone. So is the geopolitical relevance of Korea.

The ROK is a valuable trading partner. Former South Korean diplomat Chang Booseung, now at the Rand Corporation, justified U.S. defense subsidies for the South by citing “the $129 billion in annual trade” and resulting U.S. jobs. Of course, by Chang’s logic, the South should be helping to protect America to preserve all those jobs created in the South through its trade with the U.S.

Anyway, trade is no reason for Washington to pay for another nation’s defense. If so, America would be defending virtually every country on earth. It’s nice that U.S. companies benefit from commerce with the South, but the rest of Americans shouldn’t pay the price, human and financial, to secure those corporate profits. Instead, Seoul should invest its financial gains in its own defense.

A renewed Korean conflict would be a humanitarian tragedy as well, but that’s no reason to enhance the horror by involving American forces. Nations all over the world want to be rescued by the U.S. South Korea has joined the front rank of states and should take responsibility for preventing such an occurrence.

War also would be destabilizing to the region, but would not end Asian trade with America, as Chang suggested. Does he believe the PRC would turn inward, like the old Chinese Empire, recall its cargo ships, and close its borders? That the Japanese would collectively go into the fetal position and stop manufacturing goods? That all Australians would flee the coasts and dig bunkers in the Outback?

Anyway, adverse regional impact is a good reason for the Koreas’ neighbors to do more. Japan and South Korea need to work through their historical antagonisms, and would have more pressure to do so if they could not rely on Washington’s protection. China and Russia would have greater incentive to lean on the North if they could not count on America to police the peninsula.

One of Chang’s stranger contentions is that “if the United States were to sit out a war in Korea, any dominant actor arising out of such a conflict may contest U.S. supremacy in the Pacific as Japan did in the 1940s.” Really? If South Korea defeated North Korea, Seoul would take over the Greater East Asia Co-Prosperity Sphere and attack China, Japan, and the Philippines? In the unlikely event of a North Korean victory, Pyongyang would swallow Manchuria and Southeast Asia?

Over the long-term China almost certainly will challenge U.S. dominance, but that seems inevitable, and has nothing to do with the Koreas. Wasting money defending allies that can protect themselves weakens the U.S. and will make it more difficult for Washington to confront future challenges. The PRC’s growth is another reason for the U.S. to husband its resources and expect its friends and allies to take over responsibility for their own security.

Chang contended that America’s garrison plays a “counter-proliferation role” as the “Kim Jong-un is working hard to put the U.S. mainland on his target list.” But Kim is doing so only because America is “over there,” so to speak. Washington is allied with the DPRK’s adversary, has surrounded the North with military forces, and constantly threatens Pyongyang with military action. Moreover, Washington routinely bombs, invades, and occupies other nations (think Serbia, Afghanistan, Iraq, Libya). Kim is evil, not stupid. No surprise, the North believes that it needs a nuclear deterrent against the U.S. Troops in the South exacerbate his insecurity and ensure that America will be a target if North Korea eventually creates an accurate ICBM.