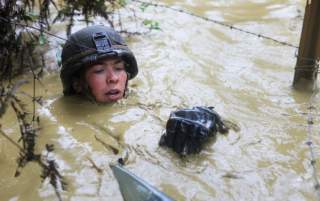 Those who dream of a permanent American imperium dismiss any difficulties or challenges. The U.S. remains strong, other nations aren’t likely to overtake America.

Most important, with work, Washington can maintain its military edge. So what if Americans have to sacrifice to sustain the force structure necessary to impose Washington’s will on other states? It is Uncle Sam’s destiny to rule the globe. People should cheerfully pay.

Yet for most Americans the more relevant destiny is living longer and facing the challenge of paying for ever more expensive health care. Federal deficits are back on the rise. There isn’t going to be much money for the national government to spend on “discretionary” items, including underwriting wealthy allies, rebuilding failed states, and enforcing international norms.

So far ignored in a presidential race most notable for the improbable candidacy of Donald Trump, America’s fiscal position is deteriorating sharply. Earlier this year the Congressional Budget Office (CBO) forecast that the federal deficit was back on the rise in 2016, with steady increases likely over the next decade.

The latest report finds a sharp jump just since the earlier report in March. Now CBO expects this year’s deficit to run $590 billion, or about a third more than last year. The only good news in the agency’s estimate is that the cumulative deficit over the next decade will be a bit lower than previously predicted because CBO expects the Federal Reserve to continue holding down interest rates. If that changes, or if the Fed no longer finds that it can keep rates down close to zero, this good news will disappear.

CBO currently expects the annual deficit to rise from $590 billion this year to $1.2 trillion in 2026, around the level during the “bad ole days” of the financial crisis. The cumulative red ink from 2017 to 2026 will be $8.5 trillion. Deficits as a percentage of GDP will go from 3.2 this year to 4.6 in 2026. The national debt held by the public (which excludes Social Security deficits) will go from $14.1 trillion to $23.1 trillion, or 76.6 percent to 85.5 percent of GDP. As the agency dryly explains, would be “considerably larger relative to” GDP “than its average over the past 50 years.”

Unfortunately, from CBO’s standpoint, even this extraordinary budget challenge eventually will be considered to be “good news.” Merely a large and rising fiscal crunch with no end in sight. Hopefully people can bear the strain of steadily rising outlays, taxes and deficits if nothing increases too fast.

But as the 2008 financial crisis demonstrated, nothing can be taken for granted. The floodtide of red ink over the coming decade cannot help but have negative consequences. And the damage could be extensive.

Warned the agency: “high and rising debt would have serious consequences, both for the economy and for the federal budget. Federal spending on interest payments would increase substantially as a result of increases in interests rates, such as those projected to occur over the next few years. Moreover, because federal borrowing reduces national saving over time, the nation’s capital stock ultimately would be smaller, and productivity and income would be lower than would be the case if the debt was smaller. In addition, lawmakers would have less flexibility than otherwise to respond to unexpected challenges, such as significant economic downturn or financial crises.”

Bad, indeed, awful, but likely inevitable. Still, hopefully survivable. However, the agency added: “Finally, the likelihood of a fiscal crisis in the United States would increase. Specifically, the risk would rise of investors’ becoming unwilling to finance the government’s borrowing unless they were compensated with very high interest rates. If that occurred, interest rates on federal debt would rise suddenly and sharply relative to rates of return on other assets.”

In such a world, the American public might tire of reassuring Europeans who can’t be bothered to pay for their own defense, South Koreans unwilling to devote more of their abundant resources to the military, and Japanese who still worry more about historical experience than present realities. The call of “America First!” would sound ever more persuasive. The U.S. military really shouldn’t be treated as a form of foreign aid for the internationally irresponsible.

However, the long-term outlook—genuine long-term, not “long-term” in Washington-speak, which is simply beyond the next election—is extraordinarily grim. Much goes into the depressing forecasts, but the numbers are dominated by one factor: the aging population. Explained CBO, “by 2046, projected spending for those programs for people 65 or older accounts for about half of all federal noninterest spending.”

The increasing number of elderly will exacerbate the fiscal impact of the continuing fast rise of health care spending, which will continue “to increase more quickly than GDP per person.” Further, interest costs are likely to rise sharply. Rates are likely to rise on an ever larger federal debt. Overall, warned the agency, the publicly held debt as a share of GDP is expected to hit 86 percent by 2026 and “141 percent in 2046—exceeding the historical peak of 106 percent that occurred just after World War II.”

Indeed, last month’s report, “The 2016 Long-Term Budget Outlook,” reads like Stephen King horror story. Even more than 2026 numbers, the estimates for 2046 suggest a fiscal environment in which the debt is reducing “national saving and income in the long-term,” making it more difficult to service the rising debt load, increasing “the government’s interest costs, putting more pressure on the rest of the budget,” limiting legislators ability to respond to any unexpected events, and making “a fiscal crisis more likely.” That is, Americans would be earning less while owing more, with less capacity to handle the likely if unforeseen consequences of those policies.

The magnitude of the fiscal problem is hard to overstate. Over the last half-century federal outlays have averaged about 20.2 percent of GDP. By 2046, figured CBO, spending would run 28.2 percent of GDP. Said the agency: “Only during World War II did federal spending constitute a larger share of the economy, topping 40 percent of GDP for three years.” This time the high level would occur without even one small war.

Taxes would be up, just not nearly so much. As a percentage of GDP federal revenues averaged about 17 percent over the last half century. CBO figures levies would be up to 19.4 percent of GDP by 2046. What was a persistent if controlled deficit in recent decades would turn into an annual floodtide of red ink. The only way to close that annual gap would be politically unpalatable tax hikes or spending cuts.

In either case, the American people are unlikely to march on behalf of higher military outlays. The domestic constituency dedicated to ensuring that the Europeans can continue to fund their welfare states, the Japanese can continue to enjoy their pacifistic proclivities, and the South Koreans can continue to pretend that the North Koreans are their brothers and sisters awaiting reunification likely is small. Candidates visiting assisted living homes who campaign for Medicare and Social Security cuts to underwrite new and expanded nation-building campaigns throughout the Third World would not likely be warmly received. Officials advocating higher taxes to fund more Mideast wars almost certainly would find themselves to be leaders without followers.

The fiscal tsunami is coming. Its arrival date is uncertain, but absent an unusual and unexpected demonstration of political courage America will be in fiscal crisis before mid-century. It would be far better to begin preparing now, by adopting a more responsible and restrained foreign policy, than to attempt to continue dominating the globe with ever less fiscal resources available to the military.

The American imperium will die. The only question is how Washington responds. U.S. policymakers must choose between an orderly transfer of defense responsibilities to allied states and a haphazard retreat in the aftermath of a fiscal crisis. This process could pose the greatest test of American leadership in coming decades.

Image: “A Marine with 2nd Platoon, Company B., Battalion Landing Team 1st Battalion, 4th Marines, 31st Marine Expeditionary Unit, crawls through a watery ditch and under concertina wire during the Jungle Endurance Course here, April 20. After completing a two-week training evolution at the Jungle Warfare Training Center, the Marines underwent the four-mile-long course through the Okinawan jungle, utilizing the rappelling, rope-crossing, improvised stretcher carry and other skills they learned. The 31st MEU is the only continuously forward-deployed MEU and remains the nation's force in readiness in the Asia-Pacific region.
(U.S. Marine Corps photo by Cpl. Jonathan Wright)”