The Korean Crisis Can Only Get Worse 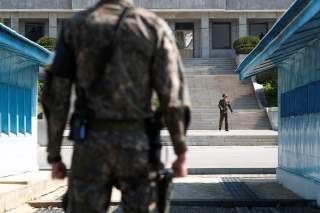 President Donald Trump shocked foreign policy professionals during his presidential campaign when he stated that he was willing to talk to North Korea’s Kim Jong-un. Earlier this year, he took up Kim’s surprise summit offer, resulting in the foreign policy shocker of the year.

No one thought an agreement would be easy, and there were fears that the president had unrealistic expectations, which apparently turned out to be the case. Convinced that his bluster and threats—matching the North Koreans’ penchant to invoke the specter of “fire and fury”—had finally brought the Hermit Kingdom to heel, Trump apparently assumed that Kim was ready to surrender his nukes and every other weapon in his possession in return for expressions of good will and promises of future benefits.

Now the president, in response to what he termed the North’s “tremendous anger and open hostility”—par for the course for both the Kim regime and Trump administration last year—cancelled the meeting. In fact, Pyongyang’s outburst was not sua sponte. The administration already had taken a victory lap, suggesting that the North had agreed to its tough demands.

Moreover, National Security Advisor John Bolton was touting the “Libya model.” Not only did the Democratic People’s Republic of Korea (DPRK) possess far more advanced military programs than Libya, but the DPRK also had a target for retaliation, South Korea’s capital of Seoul, should America attack. Most important, after promising Libyan leader Muammar el-Qaddafi economic benefits and political inclusion, Washington took advantage of his postnuke weakness to oust him in 2011. The North Koreans said at the time that they would never fall for a similar trick. Bolton was a particularly poor messenger since after backing the denuclearization accord he advocated that U.S. forces target Qaddafi directly during Libya’s civil war.

The North Koreans erupted with anger and hostility, as the president complained, but they did not walk away from the summit. Rather, they reminded the United States that the purpose of the summit was negotiation and Washington had obligations too, namely ending what the DPRK termed America’s “hostile policy.” Unfortunately, the president and Vice President Mike Pence only compounded the problem when they threatened a Libya result if no agreement was reached. This from an administration which only days before had tossed out the Iranian nuclear deal and listed a gaggle of new demands well beyond the nuclear program.

The administration presumably believed that its threats were part of its campaign for “maximum pressure.” However, there is little support in the South for military strikes that could trigger massive retaliation and full-scale war. And war-talk probably is counterproductive in the North. After all, to threaten military action against the DPRK if it does not accept Washington’s demands offers a stark reminder that the nuclear program is designed to prevent precisely such an attack. And as Qaddafi discovered, the United States will take out leaders on its naughty list even—and especially if—they have given away their nukes.

Still, a Trump-Kim tete-a-tete could have been productive. Kim appeared to be in control and able to make concessions. His performance at the summit with South Korean president Moon Jae-in suggested that he was more comfortable than his predecessors in international affairs. In contrast to his father, he was pushing economic development yet was under far greater pressure, given China’s tougher stance. If ever there was an opportunity for a deal, this seemed to be it.

And while complete denuclearization is desirable, it would be foolish to allow the perfect to be the enemy of the good. Simply freezing nuclear and missile tests limits Pyongyang’s ability to improve its nukes and produce ICBM’s capable of targeting the United States. Capping the size of the North’s nuclear arsenal, reducing forward deployments of its conventional force, and creating formal and regular communication channels, to be followed by a continuing dialogue spanning security to human-rights issues, all could have been topics.

Although skepticism remained the proper American perspective, never had the United States come so close to serious discussions with the North’s leadership over a range of issues. The results, even if they led to only the broadest agreement, would have helped in assessing whether a serious shift in direction in Pyongyang was possible. And if talks had gone well, they would have encouraged a continuing dialogue, which at the very least would reduce the chance of mistake and misjudgment triggering a confrontation and even war.

Unfortunately, by cancelling the summit President Trump has abandoned an opportunity to reduce tensions on the peninsula and possibly transform the region. His decision raises the question whether he ever intended a serious negotiation which would include United States as well as North Korean concessions.

The ill consequences are likely to be many. The North may decide that it has received few benefits for its more benighted actions of late: turning off the usual stream of hysterical rhetoric against Washington, releasing the three American prisoners, destroying the nuclear test site, and halting missile and nuclear tests. It would be little surprise if the DPRK decided to raise the geopolitical temperature again.

The president’s decision also undermines his efforts to coordinate with President Moon and maintain support from Beijing. Whatever the White House spin, the president is the one who cancelled. South Koreans were skeptical of him from the start, and he is living down to his low reputation. Beijing is likely to respond by noting that it helped bring Pyongyang into direct dialogue with Washington, but now the president is abandoning the effort. Why should China keep applying pressure when the United States walked away from a possible deal?

Worse, the president’s decision is likely to be used as an excuse for war by those who hoped the summit would fail. It appears that the president’s supporters expected Kim to cancel, but no matter. Sen. Lindsey Graham had declared that “If [the North Koreans] don’t show up that means diplomacy has failed” That, in turn, would put “us back on the path to conflict. It would be time to take American families and dependents out of South Korea.” If Kim did show and attempted “to play Trump, and that means military conflict is the only thing left.”

Graham can take that position since he lives here and knows he won’t be going to fight. Fans of military action have convinced themselves that the North won’t fight, or if it does the conflict will be a, well, a “cakewalk.” One can always hope, but to strike the North would be to play chicken with thousands, and potentially millions of lives—if the North proves capable of dropping a nuke or two on Seoul and Tokyo. Warned Gen. Joseph Dunford, chairman of the Joint Chiefs of Staff: a Second Korean War would result in “a loss of life unlike any we have experienced in our lifetimes.”

Having walked away from Singapore, the administration should develop new diplomatic channels to North Korea. The current situation is dangerous, but war is not an option. Even partial steps toward denuclearization justify attempts at dialogue. The effort may end in failure, but the stakes are too great not to try.

The president deserved praise for taking a risk in accepting Kim’s initial summit invitation. Had the meeting gone well, Donald Trump would have had a chance for the Nobel Peace Prize that he seemed to covet. Cancelling the meeting is a tragic mistake. It is vital that the administration not allow events to spiral toward renewed confrontation and possible conflict.