Time for a Better U.S.-China Grand Bargain on North Korea 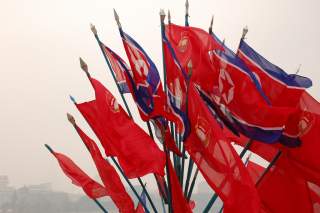 Give President Donald Trump credit: he put North Korea front and center in talks with China. In doing so, he’s created an opportunity for the two nations to cooperate to more effectively press the North to freeze, if not end, its nuclear program.

But to move forward, the Trump administration must do more than dramatically wave its military sticks. It needs to take the initiative and offer more carrots as well. And the best time to do so is now.

Over the last quarter century the United States has failed to dissuade North Korea from building nuclear weapons and longer-range missiles. Neither engagement nor isolation has diverted Pyongyang from its confrontational course.

Now the small, impoverished nation appears to be closing in on its objective to create an intercontinental missile capable of hitting America. There is no evidence that Kim Jong-un is suicidal. But that’s still cold comfort, knowing that a mistake or error by Kim—or President Trump—could lead to the destruction of an American city or two.

Despite the president’s bluster that the United States will “solve” the North Korea problem with or without China’s help, Washington has few options. Military strikes would risk triggering the Second Korean War. The United States and South Korea would win, but the price—especially for the latter, which would become the battleground for such a war—would be extremely high.

Sanctions could be further strengthened, but targeting North Korea won’t have dramatic effect without Beijing’s support. Hitting Chinese firms and banks doing business with the North would antagonize the People’s Republic of China without necessarily forcing Pyongyang to abandon its efforts.

Gaining the PRC’s cooperation remains the most obvious and effective means to apply increased pressure on Pyongyang. China accounts for upwards of 90 percent of trade with the Democratic People’s Republic of Korea. Even more important, the bulk of the North’s energy and food come from the PRC. Which means if China stepped on North Korea’s economic windpipe, Kim and company would notice.

The Trump administration has made an unsubtle attempt to browbeat Beijing, threatening to take military action against the DPRK, despite all the uncertainties and risks of doing so. President Trump also added a bit of equally crude bribery, offering better trade terms with Beijing if the latter acts as desired. However, these actions aren’t likely to convince the PRC to apply the sort of bone-crunching sanctions that almost certainly would be necessary to have much chance of changing North Korean policy.

The first problem is that the administration has combined an unconvincing threat with an ambiguous offer, along with a request that Beijing do something not detailed in return. To abandon its traditional ally and strengthen America’s geopolitical position in return for a promise of unspecified future benefits would be foolish, if not foolhardy.

And second, the Trump administration has not addressed the PRC’s greatest concerns. Applying extraordinary economic pressure on the North wouldn’t guarantee compliance. And if Pyongyang did not, the result could be regime collapse, a messy state implosion marked by political division, violent conflict, loose nukes, humanitarian crisis and mass refugee flows—all on China’s border. Which ultimately might turn into a unified Korea allied with America and hosting U.S. troops, a historic and geopolitical nightmare for a country that already believes Washington is attempting to surround it with American allies and bases.

In fact, these concerns explain why Beijing has not acted previously, despite rising irritation with the North’s confrontational, even reckless behavior. For the PRC, stability is paramount. Moreover, China views the United States as being primarily responsible for the impasse, having implemented a “hostile” policy toward the DPRK, which encouraged the latter to pursue nuclear weapons. After all, Afghanistan, Iraq, Libya and Serbia all demonstrated that small states typically lack the conventional means to resist U.S. military action. North Korea does not want to similarly end up on the ash heap of history.

Although the Trump administration’s efforts to win Chinese cooperation so far have fallen short, the president’s trade offer could be viewed as a proposal for negotiation. In fact, Beijing may have responded accordingly. For instance, the semiofficial Global Times ran an article that suggested that “Chinese society will be willing” to support new restrictions, such as an energy cutoff, on the North if the latter runs another nuclear test.

For years, U.S. officials have seemed bewildered that the residents of Zhongnanhai didn’t rush to fulfill U.S. demands and hand China’s sole military ally over to America. Washington ignored the fact that by doing so, the PRC would risk chaos blowing across the Yalu into China and strengthening the containment network encircling the communist state. After all, from America’s perspective these are benefits.

The Trump administration appeared to start down the same road, when Secretary of State Rex Tillerson testified at his confirmation hearing that the United States needed to “compel” China to apply UN sanctions against the North. However, President Trump’s trade initiative suggests greater administration flexibility.

Instead of attempting to coerce Beijing, Washington should play Let’s Make a Deal. Propose talks with Pyongyang over general security and political issues. Offer to assist the PRC if the North collapses and creates a humanitarian crisis. Respect China’s economic investments in North Korea. Withdraw U.S. forces in the event of Korean reunification. Neutralize the peninsula militarily. Include the Republic of Korea and Japan in a broader agreement.

Economic benefits, as proposed by the president, are useful, but the DPRK plays an important political and security role in Chinese government calculations. Indeed, traditionally bilateral relations were managed by the Chinese Communist Party, not the Foreign Ministry. Moreover, the People’s Liberation Army has an outsize interest in the North’s survival, and resists proposals to abandon North Korea, now often promoted by academics and the public through social media. Washington needs to address the full range of North Korean issues as they affect China.

President Trump’s attempt to scare the PRC and DPRK is more likely to frighten the South Korean people, who would suffer the most in any conflict. Nevertheless, he has gotten Beijing’s attention. But China’s leadership isn’t likely to sacrifice core security interests for better trade terms alone.

President Xi Jinping and company might be willing to act if the United States agrees to deal with the PRC’s security as well as economic concerns. Even with Beijing’s aid, the United States might not be able to bring the isolated yet determined communist state to heel. But the possibility of success is a good enough reason to give negotiation a try. It is imperative to preserve peace on the peninsula.

Doug Bandow is a Senior Fellow at the Cato Institute and former Special Assistant to President Ronald Reagan. He is the author of Tripwire: Korea and U.S. Foreign Policy in a Changed World and co-author of The Korean Conundrum: America’s Troubled Relations with South and North Korea.