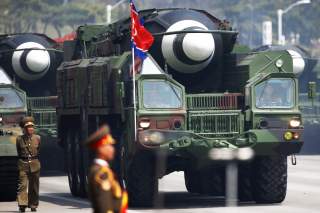 CIA Director Mike Pompeo’s secret trip to Pyongyang raises hopes that the planned summit between Supreme Leader Kim Jong-un and President Donald Trump will come off, and with positive results. Still, much could go wrong, especially if Kim proves unwilling to yield the North’s nuclear arsenal and capabilities without more than verbal and paper guarantees of Washington’s goodwill.

Even then, however, the president should not revive his belligerent, even militaristic posture of last year. This is not the first time America has faced the prospect of a worrisome adversary possessing nuclear weapons—and when restraint proved to be the best response.

North Korea has varied between problem and crisis since it was established in 1948. Originally selected by the Soviet Union to govern its occupation zone in the north of what had been Japan’s Korean colony, Kim Il-sung launched a full-scale assault in June 1950 to unify the peninsula. The United States and China successively intervened, leading to stalemate and an armistice in July 1953.

Korea’s cold war occasionally flared hot over the years, and the North began a serious effort to develop nuclear weapons in the early 1990s. Pyongyang also developed a growing array of missiles. Kim’s son and successor, Kim Jong-il, continued both programs. Now the latter’s son, Kim Jong-un, who ascended the throne in the world’s only known communist monarchy, has been rapidly pressing forward in developing both nukes and ICBMs, capable of targeting the United States.

This has thrown the Trump administration into an unseemly panic. Then-National Security Adviser H. R. McMaster and then-Secretary of State Rex Tillerson contended that Kim was uniquely dangerous and could not be deterred. One official called the possibility of a nuclear DPRK “unimaginable.” As the president threatened the North with “fire and fury,” administration officials reportedly debated military options.

Alas, North Korean retaliation would be almost certain in response to any American attack, the result of which could be full-scale war highlighted by the use of biological, chemical, and nuclear weapons. The ill consequences of other U.S. debacles, such as the Iraq and Vietnam wars, would pale in comparison.

Understandably, Supreme Leader Kim Jong-un does not inspire confidence in the West. He has proved adept at brutally eliminating rivals, even executing his uncle. He also has routinely thrown a mix of insults and threats at both the Republic of Korea and the United States. Nevertheless, there is no evidence that he is suicidal. To the contrary, he, like his father and grandfather, evidently enjoys his virgins in this world rather than the next. U.S. intelligence has come to the same conclusion as most policy analysts: Kim is evil, not crazy. He wants to preserve his regime, not trigger a Goetterdaemmerung in which he leaves this world atop an atomic funeral pyre.

Indeed, the North’s nuclear program is not the first significant challenge to the equanimity of Washington policymakers. There was the Soviet Union, aggressive communist power ruled by Joseph Stalin, a man who defined ruthlessness and slaughtered his own supporters as well as opponents. If there was one government the United States did not want to see acquire nukes, it was Moscow. However, America stood by, rejecting proposals for preventive war.

Even more disturbing was the nuclear program undertaken by Mao Zedong’s China. The PRC’s effort began in 1955, apparently in response to American threats of nuclear war. Outsiders worried that Beijing’s leadership was anything but normal. The 1960 National Intelligence Estimate warned: the PRC’s “arrogant self-confidence, revolutionary fervor, and distorted view of the world may lead [China] to miscalculate risks. This danger would be heightened if Communist China achieved a nuclear weapons capability.”

Mao seemed unhinged even by communist standards. Mao makes Kim appear to be a responsible, even mainstream thinker. In 1955 the former told the Finnish ambassador that “The Chinese people are not to be cowed by U.S. atomic blackmail. Our country has a population of 600 million and an area of 9,600,000 square kilometers. The United States cannot annihilate the Chinese nation with its small stack of atom bombs.” Two years later Mao declared: “China has a population of 600 million; even if half of them are killed, there are still 300 million people left.” He mused about nuclear war with Indian prime minister Jawaharlal Nehru: If “half of mankind died, the other half would remain while imperialism would be razed to the ground and the whole world would become socialist.” Happily, in Mao’s view, the world’s population ultimately would recover.

In retrospect, such comments appear to have been political bravura rather than calculated policy, perhaps an attempt at geopolitical bluff by a notably weaker power. Nevertheless, Mao initiated the deranged “Great Leap Forward” in the late 1950s, which resulted in mass starvation, and the “Cultural Revolution” in the mid-1960s, which plunged much of the nation into a veritable civil war. No American could comfortably trust such a person to keep the peace.

Against the Chinese nuclear threat President John F. Kennedy first employed diplomacy, seeking to cooperate with the Soviet Union, which had ended its support for China’s nuclear energy program. Although Moscow indicated its interest in test ban and nonproliferation treaties, it did not respond to proposals for joint military action. In April 1963 the Pentagon presented military options to the Kennedy administration. Ideas in and out of the administration included sabotage, commando raid, blockade, invasion of China by the Nationalists or of North Korea by South Korea, and air strikes.

There is disagreement over how serious the administration was. Kennedy National Security Adviser McGeorge Bundy later contended that there was only “talk, not serious planning or real intent.” However, Bundy wrote on one memo: “I’m for this.” Researchers found evidence that the administration took the idea quite seriously, devoting serious intelligence resources to monitor Beijing’s activities. Ambassador W. Averell Harriman suggested “threatening to take out the facilities if necessary.” In one administration meeting Ambassador Chester Bowles argued: “We [are] going to have to fight the Chinese anyway in two, three, five, or ten years and it was just a question of where, when and how.”

Preventive war also won outside support. In 1965 the conservative magazine National Review backed preventive war: “We can destroy, destroy literally, physically—the present Chinese nuclear capability.” Doing so would prevent the PRC from developing nuclear weapons for some years and could be done with little risk, editor William F. Buckley contended. (Nearly three decades later he wrote of North Korea: “That we are obligated to abort [the North’s] nuclear bomb is axiomatic.”) His brother, James Buckley, who was later elected to the U.S. Senate from New York on the Conservative Party line, said that preventive war against China: “would have been a prudent” step because it would have eliminated “an atomic capability which is now increasingly threatening.”

The Johnson administration debated the idea. Although President Kennedy believed that a Chinese nuke would lead to the conquest of Southeast Asia, President Lyndon Johnson reportedly was less concerned about the threat posed by the PRC. A detailed report by the State Department’s Robert Johnson helped allay concerns about a nuclear China. Among the arguments advanced by critics of the military option was the fact that strikes would be difficult to conduct and even if successful would only slow Beijing’s progress.

Moreover, in the administration’s view, a nuclear China would not dramatically change Asia’s balance of power and could be deterred. Beijing also was likely to retaliate in some way, perhaps against U.S. forces in Vietnam, Taiwan, or American bases elsewhere, and might move to heal its rift with the Soviet Union. In fact, some analysts wondered if a U.S. attack would cause Moscow to act on its mutual defense commitment, despite the communist nations’ strained relationship. Finally, the United States would risk significant international blowback. These concerns apply to North Korea today.

So the United States did nothing. On October 16, 1964, the PRC conducted its first nuclear test. Within two more years, China had tested a nuclear-capable missile and hydrogen bomb.

This still did not end the preventive war story. The Republic of China’s Chiang Kai-shek continued to push for U.S. action after China’s test. Escalating combat in Vietnam caused Washington to fear that Beijing might intervene in massive numbers, a la the Korean War, and plans were made to respond, including with attacks on China’s nuclear facilities. But those tensions soon subsided and the Johnson administration decided against preventive strikes.

The newly inaugurated Nixon administration briefly considered attempting to resurrect the idea of joint action against the PRC with the Soviet Union, but, as before, that idea went nowhere. Thoughts of preventive war against China finally receded into history.

Looking back it appears U.S. administrations were right to accept a nuclear PRC rather than launch preventive strikes, which likely would have triggered a broader, enduring conflict. China went on to develop a nuclear arsenal and missiles capable of delivering death and destruction around the globe. However, Mao Zedong hosted Richard Nixon as the two leaders ended decades of bitter hostility. After Mao’s death his nation abandoned totalitarianism, adopted capitalism, enjoyed the fastest sustained economic growth on the planet, and developed the world’s second largest economy.