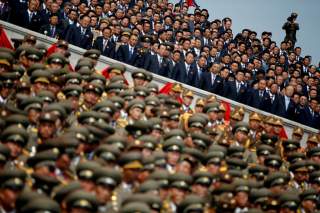 Maybe that will happen. It would be great if it did. We can dream—but it wouldn’t be wise to count on that outcome.

Yet that appears to be the Trump administration’s approach to the Democratic People’s Republic of Korea.

Kim says a nuclear deterrent is necessary for his nation’s defense. The president responded by stepping into a corner, insisting that he will loose the dogs of war before the North develops the capability to hit the United States.

Of course, it is difficult to determine the actual reach of Pyongyang’s weapons, allowing the Trump administration to fudge a bit. However, some officials already stated that they have only months to act. Moreover, the DPRK routinely claims inflated test results and regime capabilities. In fact, Pyongyang recently declared its deterrent to be complete. Unless Kim soon genuflects toward Washington, it will become obvious to all that Pyongyang has called Washington’s bluff.

So, if the administration is serious, war seems inevitable.

The Costs of War

Alas, this would be no “cakewalk” à la Iraq. Presumably the administration would target missile and nuclear sites—but not all locations are known, some facilities are buried deep underground and the North relies on mobile launchers. Washington also could try to kill Kim, but that might merely reinforce other members’ concerns about regime security, rather than bring forth a liberal regime that is well disposed toward America.

Unfortunately, retaliation is highly likely. Pyongyang might focus on U.S. military facilities, threatening to hit South Korean and Japanese cities if Washington went another round. Or Kim might decide an American attack was a prelude to regime change, and go all in at the start. Although the United States would ultimately triumph, the course of any war would be unpredictable, and estimates of potential casualties routinely break a million. If the North dropped nukes on Seoul and Tokyo—North Korea’s capabilities remain uncertain—the number of dead and wounded would rocket upward.

Thus, few analysts believe there is a viable military option. That claim should be filed with proposals for preventive war against the Soviet Union and China when they were developing nukes. Uncle Sam played it safe, and was not sorry as a result.

If not war, then negotiation is necessary.

Does Diplomacy Still Have a Chance?

Yet last week, the world watched the unseemly gelding of Rex Tillerson (who is secretary of state for a little while longer, at least) over precisely this issue. He suggested initial talks about talks, or something else, without preconditions, with the Democratic People’s Republic of Korea.

But after being publicly reprimanded by the president, the secretary abased himself and went before the UN Security Council to announce that the North had to “earn” its way back to the negotiating table by ending missile and nuclear tests (receiving nothing in return) and agreeing to give up its nukes and missiles (with only the exact terms of surrender to be determined). There was no difference between him and the president, explained Secretary Tillerson—as he genuflected deeply toward the Oval Office.

The bizarre spectacle made serious negotiations between the United States and North Korea less likely.

The North first must wonder with whom it could talk. Secretary Tillerson seems like a decent chap who might be worth a few minutes at a UN cocktail party, but he obviously is irrelevant to solving the North Korea problem. He doesn’t speak for the president, and isn’t likely to be around much longer. There’s no reason to waste time discussing anything serious with him, such as relations between the United States and the DPRK.

Second, President Donald Trump demonstrated that he is interested only in the North’s virtual surrender. He previously labeled talks a “waste of time” while criticizing Secretary Tillerson on Twitter. Yet only the secretary, among a gaggle of constantly hyperventilating administration officials, made much effort to deny support for regime change. Moreover, even if the president publicly agreed, his assurances would have no value. President Trump abandoned his earlier proposals to engage Kim and ostentatiously repudiated his predecessor’s agreement with Iran, which rewarded Tehran for accepting additional safeguards against nuclear-weapons development.

More generally, Washington cares little about past assurances and agreements that prove inconvenient. Recently released Cold War records demonstrate that Soviet leaders reasonably believed NATO would not be expanded to their nation’s borders. Yet once Moscow’s military had withdrawn, the United States played the Russians for fools and accepted as members former Warsaw Pact members and Soviet republics. Only after the revival of the Russian military was President Vladimir Putin able to win some degree of revenge.

Moreover, the Obama administration took advantage of the Qaddafi government’s elimination of its nuclear and missile programs to impose regime change. When Muammar el-Qaddafi faced a domestic insurrection, the United States and Europe turned on their newfound friend, making Libya’s disarmament the prelude to his regime’s destruction and his gruesome death.

It should surprise no one that Kim is unlikely to take Qaddafi’s path—voluntarily, at least. President Trump certainly would have to do more than whisper a few sweet nothings into Kim’s ear. But the North Korean leader isn’t likely to get much more if he begins any negotiation by accepting America’s position, as Washington insists.

In short, diplomacy appears to be a dead end . . . which brings us back to a war, which would be mad to contemplate.

No one—outside of Kim, anyway—wants the DPRK to have a nuclear arsenal. But then, the prospect of the much larger People’s Republic of China, led by the even more radical Mao Zedong, possessing nuclear weapons was much more fearsome. Likewise, the Soviet Union under America’s chief Cold War bête noire, Joseph Stalin, was far scarier than North Korea. Despite proposals for preventive war in both cases, Washington responded by containing and deterring the new nuclear powers.

Time to Get Serious

Nothing suggests that Kim is suicidal. To the contrast, by all accounts he follows his father and grandfather in seeking his bounty in this world, rather than the next. Should he hope to use nuclear weapons to force reunification on his terms, he can be deterred—just as he hopes to deter America.

Thus, the starting point in confronting Pyongyang is containment. It could be by some combination of South Korea, Japan and the United States—and perhaps even China. The DPRK should know that to start a war means the defeat and destruction of the North Korean state and Kim dynasty. That is precisely why the North has not renewed its takeover attempt over the last sixty-four-plus years.

Next, the United States should talk to Pyongyang. Negotiation is communication, not concession. To have not talked with Moscow during the Cold War would have been diplomatic malpractice. The lack of relations with China in 1950 contributed to Beijing’s fear of America’s plans in Korea and prevented the PRC from effectively warning Washington about the former’s red lines, such as sending American troops to the Yalu.

In the short term, the United States should concentrate on slowing the North’s rush to develop its missile and nuclear capabilities. For instance, trading a freeze on new tests for the suspension of U.S.–South Korean military exercises, as proposed by China and Russia, would be a good deal for America: canceling nonessential maneuvers in order to buy time, during which the potential combatants can step back, take a breath and seek peaceful solutions.

In the longer term, there is much more to do. Washington should talk to China about how Beijing can toughen its sanctions. The United States and its allies should develop a package of benefits, backed by China, in return for North Korean denuclearization. And Washington should confront a future in which the DPRK possesses a nuclear arsenal capable of hitting the American homeland: options including negotiating to limit Pyongyang’s nuclear stockpile, encouraging South Korea to develop its own nuclear deterrent and withdrawing U.S. conventional forces from the peninsula, since they are not needed to defend the Republic of Korea, but rather entangle America militarily with a nuclear-armed North.

Of course, to achieve any of these objectives requires the president to work with his officials, and not publicly undercut them. Admittedly, that would be a new experience for President Trump. But he might surprise himself while succeeding in putting his policies into action.

There is plenty wrong with U.S. foreign policy. But the single worst approach, which could lead America into a devastating war in Northeast Asia, might be that toward North Korea. Today, the administration essentially hopes something magical will happen to denuclearize the peninsula. If not, threatens the president, he will plunge the Korean Peninsula, Northeast Asia and America into war. For the sake of America, both Koreas and the region, the administration instead should find a peaceful path out of the current impasse.