Trump Should Accept the Realities on the Ground in Syria 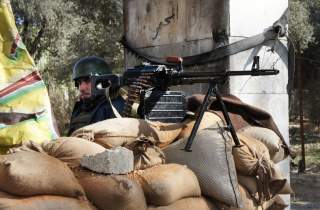 Late last month, after a preliminary thirty-day review of the U.S. war strategy against the Islamic State, the Pentagon delivered its list of options to the White House per President Donald Trump’s order. The details that have been leaked out in drips over the past week portray a Trump administration that is prepared to continue its predecessor's counter-ISIS strategy, but with far more resources to do the job.

A Marine artillery unit is setting up shop about twenty-miles south of Raqqa with the purpose of providing covering fire for the Syrian Democratic Forces slowly pushing towards the city. An additional four hundred U.S. troops will be deployed to Syria to accelerate the campaign and tighten the noose around ISIS’s neck, a deployment that would almost double the current U.S. troop presence in the country. All of these decisions could be seen a mile away; as a presidential candidate, Donald Trump made no bones about wiping Islamic terrorism from the face of the earth, even if doing so is impossible from a practical standpoint.

What we don’t know yet is what Trump’s policy towards the broader Syrian civil war will be. In fact, many of us don’t particularly understand what the Syria policy is now. UN Special Envoy Steffan de MIstura, the man in charge of pulling a rabbit out of his hat and striking a peaceful resolution to the war, is similarly at a loss: “I do know they [the Trump administration] are [getting] instructions from President [Donald] Trump to develop a new strategy or new options . . . So I would say let’s wait for that.”

President Obama spent four years agonizing about what to do on the Syria question. Much of the foreign policy establishment in Washington were lobbying intensely for more U.S. skin in the game, which boiled down to a combination of more powerful weapons systems to the moderate Syrian opposition, holding fast and true to the “red line” that he announced on chemical weapons, and creating safe zones or a no-fly zone to protect civilians from being bombarded by Assad’s war machine. The details of those proposals—how much it would cost; how the U.S. could avoid putting its own forces on the ground to protect the zones from all manner of violence; how the Russians would respond to a more aggressive U.S. presence; and how pouring more arms into the conflict would help promote a peaceful settlement—were either left unanswered or were conveniently ignored by the hawks. President Trump faces the same central question that President Obama faced during his tenure: what can the United States possibly do to hasten a diplomatic resolution to the conflict?

Trump’s national security advisers are no doubt proposing options to him as we speak. Safe-zones are not only back on the table, but are sufficiently high enough on the list that Trump spoke about them with King Salman of Saudi Arabia. President Trump appears to believe that he can use the power of persuasion to not only bring the Gulf Arabs to his side on such a proposal but to convince them to pick up most of the tab for its administration. And yet which country or coalition of countries would actually man the zones and how those zones would contribute to an end to the war is difficult to envision. In the end, safe zones are simply a Band-Aid to a much wider problem that will continue to power the conflict: that is, the unwillingness of the war’s main parties to sit down at a conference table and talk about Syria’s future without throwing blows and one another.

Trump could send more and better weapons to what is left of the moderate Syrian opposition on the ground, hoping that enough anti-aircraft or anti-tank missiles would cause such a strain on Assad’s forces that the playing field would level out. A strategy that might have worked earlier in the conflict—when the Syrian army was ceding territory every single month and close to collapse—however, won’t prove effective in 2017. The chances of those weapons falling into the hands of the much stronger Islamist factions are far more likely today than they’ve ever been, in no small measure because the Salafist and Islamist ground units now calling most of the shots. And, needless to say, the Russians and the Iranians are so invested in the Assad regime’s survival that both would simply increasing their own support and cancel out any weapons that Washington was willing to send.

The only option that the Trump administration has that could remotely succeed is by taking a far less strident town during the UN-sponsored, intra-Syrian negotiations that are currently ongoing in Geneva. The demand that Bashar al-Assad unconditionally resign after a transitional period, a policy that Assad himself rejected even when it was looking as if he would be strung up in a town square in a few weeks time, is no longer a demand worth making. Like it or not, Russian airpower and Iranian ground forces have provided Assad with far more than breathing space—they've given the Syrian dictator a new lease on life and far greater leverage at the negotiating table. The United States can either accept the realities as they now exist or ignore them, keep insisting that Assad negotiate his own surrender and exile, and keep operating on the fanciful notion that highly dubious military engagements like safe zones—which would cost billions of dollars over many years—are bound to fail in 2017 just as they would have failed in 2015 or 2016.

Trump is a businessman who sees the world in transactional terms. He knows what looks like a winner and what looks like a loser. Syria needn’t be a loser for him if he accepts reality and has the foresight to see that Assad’s representatives won’t cooperate in Geneva if they don’t see a light at the end of the tunnel. Allowing Assad to run for any presidential election that follows a transitional period may be morally distasteful, but it’s also a concession that could transform the Syria talks from an unproductive debating society to a groundbreaking peace conference.