Video Interview: What Will America Do about the Syrian Chemical Attack? 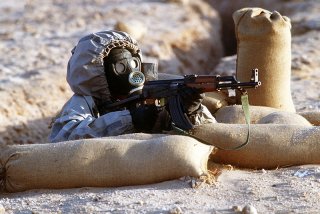 Editor's Note: Lt. Col. Daniel L. Davis (Ret.), a senior fellow at Defense Priorities, and Harry Kazianis, Director of Defense studies at the Center for the National Interest, discussed the recent gas attack in Syria and U.S. foreign policy in the Middle East. This conversation was recorded on Facebook Live. You can check out one of Daniel Davis’s most popular articles, 9/11 Forever (and Ever), below:

The horrific events surrounding 9/11 traumatized a considerable number of Americans, leaving most feeling vulnerable and insecure. In the first few days and weeks after the attack, there were many rumors of “second wave” attacks. Americans were understandably jittery. Our government had to make a number of decisions with imperfect information to protect us and to find the guilty as quickly as possible. It is the constitutional responsibility for the government to “provide for the common defense” of the nation from all enemies, foreign and domestic. But what if, in the just pursuit of that objective, we unwittingly harmed our security? What if we harmed it a lot? Would we, as a nation, be able to recognize the error, admit mistakes had been made, and then take necessary corrective action?

Impressively, within just a few months of the 2001 attacks, the Taliban had been virtually wiped out and Al Qaeda decimated; bin Laden was hiding impotently in a cave somewhere in Pakistan. The government also took defensive action domestically such as strengthening TSA security measures to make flying safer, establishing the Department of Homeland Security, and facilitating greater FBI and CIA cooperation. As a result of these and other actions, there have been no large scale terrorist attacks in the United States since.

Yet despite these impressive successes, and even after thirteen years, the specter of “9/11” continues to be used as justification for a seemingly endless list of security measures, funding for a never-ending stream of weapon systems and for every military action overseas. An honest assessment of the effectiveness of these measures reveals that in the righteous desire to defend ourselves from those who wish us harm, some of our policies and actions have markedly weakened our national security. Perhaps of greater concern, however, is that some of these measures have caused us to drift into darker moral territory.

As is now well documented, the reason given for initiating the Iraq war in March 2003—the presence of weapons of mass destruction—proved to been erroneous. During a CNN interview in October 2004, then-Secretary of Defense Donald Rumsfeld dismissed concerns of the war’s justification by saying, “And why the intelligence proved wrong, I'm not in a position to say. I simply don't know. But the world is a lot better off with Saddam Hussein in jail than they were with him in power.”

Both the George Bush and Barack Obama administrations have commended the use of unmanned aerial vehicles, or “drones,” as being an effective means of precisely targeting terrorists. There are many studies that confirm legitimate enemies of the United States have been taken out by drones. The question, however, is not whether drones—or missiles fired from them—have killed some “bad guys,” but whether they ultimately enhance or worsen American security. A comprehensive analysis of the evidence indicates the overall impact of these attacks have been outright antithetical to U.S. national interests.

The Stanford and NYU Law Schools jointly conducted a probe of the effectiveness of American drone strikes. In the 2012 executive summary of Living Under Drones, the authors state that after “nine months of intensive research—including two investigations in Pakistan, more than 130 interviews with victims, witnesses, and experts, and review of thousands of pages of documentation and media reporting—this report presents evidence of the damaging and counterproductive effects of current U.S. drone strike policies.” Michael Shank, who teaches at George Mason University's School for Conflict Analysis and Resolution, said in a recent email message that after traveling extensively in several countries where U.S. drones operate, the reasons for the negative effects are as clear as they are pervasive.

“The consequences are quite serious,” he said. “Perception, merited or misguided, of U.S. drone-killings of civilian targets is generating widespread vitriol—from Yemen to Somalia to Pakistan. The angst is being expressed at every level of society, from government officials to street vendors and everyone in between.” The single greatest consequence of the combination of U.S. drones and missiles strikes, Mr. Shank continued, “is the near complete erosion of goodwill towards the U.S. government, in these aforementioned countries, and the near overnight creation of myriad militant groups in response. The United States has, in less than a decade, eviscerated overwhelming pro-American public sentiment.” Pro-American sentiment took another hit last month, as an errant airstrike in Syria killed many of the civilians our involvement there was designed to protect.

On January 11, McClatchy news reported that a coalition airstrike had been launched, apparently to attack a building where several ISIS fighters had been identified. But tragically, reporters for McClatchy “located two sources who confirmed a high civilian death toll from the strike. One witness, [a pro-rebel] activist in Al Bab, gave the death toll as 61 civilian prisoners and 13 Islamic State guards.” Apparently coalition targeting intelligence mistook a makeshift ISIS civilian prison for an ISIS military compound. One mistake of this magnitude can often destroy the goodwill gained through scores of attacks that kill ISIS terrorists. Errant drone and missile strikes aren’t the only things damaging American prestige, however.

Government interrogation policy in force at the time of the 9/11 attacks, contained in the U.S. Army field manual on torture, specified that the Geneva Conventions “and U.S. policy expressly prohibit acts of violence or intimidation, including physical or mental torture, threats, insults, or exposure to inhumane treatment as a means of or aid to interrogation.” Former FBI agent Ali Soufan was the U.S. interrogator to question the first Al Qaeda detainee in the spring of 2002. In Congressional testimony given to the Senate Judiciary Committee in 2009, Mr. Soufan explained how using the approved methods was effective.

“Immediately after Abu Zubaydah was captured, a fellow FBI agent and I were flown to meet him at an undisclosed location,” he said under oath. “We started interrogating him, supported by CIA officials who were stationed at the location, and within the first hour of the interrogation, using the [Army field manual] approach, we gained important actionable intelligence…. [At a subsequent interrogation session, we] elicited information regarding the role of KSM [Khalid Sheikh Mohammed] as the mastermind of the 9/11 attacks…”

However, back in Washington U.S. officials had concluded that despite the fact interrogation guidelines warned torture would be ineffective, they desired more coercive methods anyway. When the order to apply the harsher techniques was relayed to the field, Ali Soufan and his team were shut down and CIA contract interrogators brought in. Almost all useful intelligence from Zubaydah also shut down. A frustrated Mr. Soufan said in a recent telephone interview that in addition to delaying the acquisition of accurate intelligence, “using torture damaged our credibility and reputation abroad. Aside from the fact using EITs [enhanced interrogation techniques] didn’t disrupt any plots, it did play directly into the hands of the enemy by portraying the United States as a violent, unethical foe, serving as an effective recruiting tool” for terrorist organizations.

Publicly released in late 2014, the U.S. Senate Study on Interrogation and an associated CIA Inspector General report described some of the procedures the CIA allegedly used as part of its interrogation program. Below are a few of the more egregious excerpts:

1. MOCK EXECUTIONS. A CIA “debriefer” threatened detainees with a power drill. In October 2002 the debriefer fired a handgun outside the interrogation room and told the detainee they had just killed another detainee for withholding information (7 May 2004 CIA Inspector General Report, p.70, para 169).

2. “During the four days the individual was detained, an Agency independent contractor, who was a paramilitary officer, is alleged to have severely beaten the detainee with a large metal flashlight and kicked him during interrogation sessions.” The detainee died in custody on 21 June: (CIA, p.78-79, para 194)