Washington Needs to Understand the Costs of Its Actions 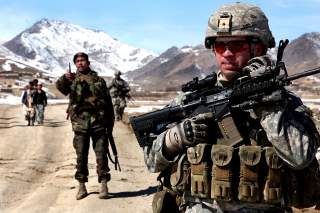 Editor's Note: In our latest Facebook Live interview (please like our Facebook page to see more of these events) Jacob Heilbrunn, editor of the National Interest, Harry Kazianis, Director of Defense studies at the Center for the National Interest, and Lt. Col. Daniel L. Davis (Ret.), a senior fellow at Defense Priorities, discussed the costs of America’s foreign policy.

Daniel Davis recently wrote an article on the war in Afghanistan and how it is no longer serving its purpose. An excerpt of the article can be found below:

On Wednesday morning in the Afghan capital, a terrorist detonated a massive truck bomb near Kabul’s diplomatic quarter, killing at least eighty and wounding more than 350 others. A NATO statement on the bombing emphasized that “attacks such as these only serve to strengthen our commitment to our Afghan partners as they seek a peaceful, stable future for their country.” Yet even as Kabul and NATO hunt down those responsible, there are bigger questions for U.S. policymakers: are American military measures actually improving security in Afghanistan? Evidence clearly reveals the answer is no. Before the president deploys one more soldier to Afghanistan, a change in strategy is required.

At a press briefing at the Pentagon last December, the commander of U.S. Forces in Afghanistan restated long-standing policy there. “Our main objective in Afghanistan,” Gen. John W. Nicholson told reporters, “is to prevent the country from being used as a safe haven for terrorists to attack to the U.S. or our allies.” While the aspiration is certainly understandable, the policy has been an abject failure for sixteen long years. Without a major change of course, current and future U.S. policies in Afghanistan will likewise fail. There are three critical reasons why.

First, the objective itself is impossible to attain. Afghanistan is a vast, untamed and mountainous country. I served my second deployment there in 2010–11, at the height of President Obama’s surge. During the summer of 2011 there were one hundred thousand American troops fighting in Afghanistan. I traveled extensively throughout the country and can confirm that even with the highest concentration of U.S., NATO and Afghan security forces, major sections of the nation were beyond the troops’ ability to control.

Even then, the Taliban had freedom of maneuver in large portions of eastern, central and southern Afghanistan. Today, the government controls less than 60 percent of its territory. It is impossible, therefore, to set as a policy an intent to “prevent” terrorists from using Afghanistan as a launching pad for planning attacks against the United States. Even with two hundred thousand U.S. troops, it would be impossible.