What to Expect from North Korea in the Olympics 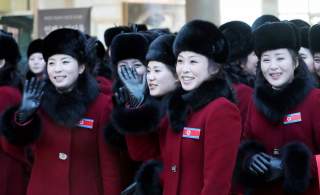 The two Koreas are sending a united women’s hockey team to the upcoming Olympic games. The Moon government’s invitation was controversial in the South, where residents are not in a particularly forgiving mood toward the North. American analysts almost uniformly dismissed the likelihood that the maneuver will achieve anything substantive, let alone represent serious movement toward denuclearization of the Democratic People’s Republic of Korea.

Which is undoubtedly true, but to be expected. The Olympics has never been free of politics. Perhaps most infamous was the 1936 Berlin games, which highlighted Adolf Hitler’s Third Reich.

Also common are boycotts. In 1956 two groups of states refused to attend the games to protest France’s, Great Britain’s, and Israel’s invasion of the Suez and the Soviet Union’s invasion of Hungary. Nearly thirty African nations boycotted the 1976 Montreal games because New Zealand’s rugby team had toured South Africa, which then imposed Apartheid. The United States and Soviet Union traded boycotts in 1980 and 1984, triggered by the invasion of Afghanistan. None of these efforts achieved much, other than disappointing athletes who had trained to compete.

In 1988 the Republic of Korea used the games to highlight its arrival internationally as a prosperous and newly democratic power. In this Seoul largely succeeded, though the DPRK sought to disrupt the games, engaging in one of its most notorious acts of terrorism, bringing down a Korean Airlines flight. That had no impact on the Olympics, however.

This time Pyongyang has taken a different approach, using the Olympics to engage the Republic of Korea and promote cheery notions of national brotherhood and reunification. Whatever happens is unlikely to have much impact on the current nuclear controversy, but it will have a positive impact if it strengthens the resolve of the Moon government to resist the Trump administration’s apparent plans for war.

Reports that the administration decided not to nominate Victor Cha as U.S. ambassador to South Korea because he advised against war suggest that President Donald Trump really may be prepared to blow up Northeast Asia. Until now, Washington sought to prevent a recurrence of the Korean War, but the president appears to hope that Kim Jong-un would trust the United States to leave him alone after being disarmed. Alas, the fate of Muammar el-Qaddafi is likely to push Pyongyang to arms. Even if the war was “over there,” as Sen. Lindsey Graham (R-SC) so inelegantly put it, the consequences would be horrific and global. Only resolute opposition from South Korea might be able to block the president’s apparent plans.

However, the inclusion of the DPRK in the Olympics offers another benefit, a unique opportunity to add some new competitions specially organized for the winter extravaganza being hosted by the South. And these new challenges should not be treated as unique to the Korea games, but should be made a permanent part of the Olympics, at least until the Korean Peninsula again becomes one.

For instance, imagine speed-skating across the Yalu River, the route taken by many North Korean defectors. The athletes would be encouraged to excel by including pursuers armed and authorized to shoot to kill. Reaching China first from the North would win the gold.

Related would be hide-and-seek in the Chinese countryside around the city of Dandong. National teams would successively play defectors and pursuers. The best combined score would triumph; poor performers would spend a week in Chinese jail. The speed-skating and hide-and-seek races could be combined in a new biathlon, displacing the traditional combination of skiing and shooting.

Another new event could be precision artillery fire. Working with a fixed number of cannon, athletes would try to do the most damage to targets painted with landmark buildings in Seoul. The team causing the most destruction would win gold. Last place finishers would have to move to the South Korean capital for the duration of the nuclear crisis.

Also worth adding would be Burrowing for Battle. Teams would dig a tunnel about 2.5 miles long, the average width of the Demilitarized Zone separating the two Koreas. Medals would be awarded based on the size of the tunnel constructed within a given time. A related event, also providing an opportunity for another biathlon, would be to push a set number of people and vehicles through a given size tunnel, with victory going to the fastest competitor.

Urban defection would be another event. Participants would have to elude trained teams of “minders” and reach a designated “asylum point.” Athletes would be graded on speed and grace of their escape, race for freedom, evasive techniques and undetected arrival.

Also testing both physical and mental agility would be obsequious freestyling. Participants would develop a routine involving singing and dancing dedicated to praising political tyranny and oppression. The more fawning the rhetoric, unctuous the behavior, imperial the wardrobe, and majestic the music, the higher the score.

A related event would be artistic militarism. Athletes would use traditional sports—running, ice-skating, rowing, diving, snowboarding and even curling—to illustrate the triumph of the heroic representatives of the people over long odds against imperialist aggression. Points would be awarded for creatively representing military forces, ingeniously caricaturing evil warmongers and effectively providing an uplifting liberation message.

In the game of underwater detection participants would seek to sink sailboats painted as warships. Extra points would be awarded for the quickest and most complete demolitions. Premature detection would result in athletes being placed on the target boat in a subsequent heat.

The Olympics highlight could be the insult marathon. Contestants would run the usual 26.2 miles, while spewing vicious slurs at one another. The participants would be judged not on racing speed, but on number, creativity, and harshness of their epitaphs. Unique and esoteric nastiness would be preferred, but insults would have to be suitable for publication around the world.

Those who have criticized North Korea’s participation in the upcoming game ignore the obvious benefits. By simply seeming to reduce tensions on the peninsula, the competition will place another obstacle in the Trump administration’s dangerous race to war. Moreover, the Olympics has an opportunity to add a series of timely and interesting events. How better to ensure a large and engaged television audience around the globe?

Doug Bandow is a Senior Fellow at the Cato Institute and a former Special Assistant to President Ronald Reagan. He is the author of Tripwire: Korea and U.S. Foreign Policy in a Changed World. and co-author of The Korean Conundrum: America’s Troubled Relations with North and South Korea.