When Trump Met Putin: Is Reconciliation in the Air? 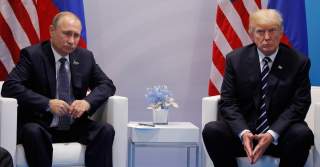 The long awaited meeting between America’s and Russia’s presidents finally occurred at the G-20 summit. They got along great, said Secretary of State Rex Tillerson, connecting “very quickly,” and talked for more than two hours. Even First Lady Melania Trump couldn’t drag her husband away after the first hour.

The conversation began with Russia’s apparent election hack. Putin denied it. The two presidents agreed to stay out of each other’s political affairs. That’s a fair starting point, though it brings to mind Ronald Reagan’s favorite Russian saying: “trust but verify.” The integrity of America’s electoral system is a vital interest and should be carefully protected. At the same time, U.S. officials would do well to remember their anger at Moscow’s intrusion and forswear mucking around in other people’s votes, as Washington has done to a reported eighty-one nations, including Russia a couple of decades ago.

The two presidents also talked about Syria. But, it appears, they paid much less attention to it than the election, though they okayed a “de-escalation agreement” for southwestern Syria. Disagreement over the civil war should be easy to resolve. Once the Islamic State is defeated, Washington should wave goodbye. All along, Moscow has had one fairly simple objective: save the Assad regime. That’s a morally dubious enterprise, but over the years America has backed its share of brutal thugs. Even now, President Trump has been acting like the chief American lobbyist for the embarrassing Saudi royals. At least Moscow has a chance of achieving its end.

In contrast, the United States wants to overthrow Assad, defeat ISIS, empower the half dozen “moderates” still to be found among the insurgents, work with the Kurdish militias, avoid offending the Turks, get the squabbling Sunni Gulf states to do more, create a liberal political order like those established in Afghanistan and Iraq—or not—and avoid getting into a war with Russia. The first would chiefly empower the bad guys, the second is almost done, the third is futile, the fourth is coming to a conclusion, the fifth isn’t worth the effort, the sixth is hopeless (just like the seventh) and the eighth is really important. The best way to achieve the last one is to simply leave and allow the Russians and regional powers to cope with the mess. It won’t pretty. But the aftermath also isn’t America’s responsibility. After making a hash of Afghanistan, Iraq and Libya, Washington should take a break from nation building.

However, the biggest issue, which has hardly received any attention at all in the wake of the meeting, is Ukraine. This is the most important barrier to improving bilateral relations, as well as reducing European tensions.

Russia has behaved badly toward Ukraine (and Georgia). But for both the United States and Europe, the issues raised are primarily humanitarian rather than security. Ukraine spent most of the last two centuries as part of the Russian Empire and Soviet Union. Its status has never mattered to the defense of America or Europe. Are stability and peace in Ukraine reassuring to its neighbors? Of course. But that’s no justification for a military confrontation, especially with a nuclear-armed power that views border security as a vital interest.

Sanctions aren’t achieving anything useful. They offer continuing punishment of the Russian nation, but little incentive for the Russian government to change its behavior. There is no chance, short of a general war, that Moscow will disgorge Crimea. Russia might be willing to abandon local separatists and exit the Donbass, though Kiev, too, would have to fulfill its bargain.

However, Moscow has a continuing incentive to keep “destabilizing” Ukraine, which President Trump criticized in his speech in Poland, so long as Kiev is pressing to join NATO. A long-term solution is unlikely, absent an allied pledge not to bring Ukraine into the transatlantic alliance. The critical issue is not what Ukrainians desire; given my druthers, I too would want to be defended by the globe’s superpower. The decision whether to confront a nuclear-armed power on its border, over issues it views as vital, is one that should be left to the allies—most importantly the United States, which would do all the heavy lifting in any war with Russia. NATO should explicitly state that irrespective of previous pledges foolishly made, neither Ukraine nor Georgia will be inducted.

Of course, any agreement would be criticized, given the bizarre bloodlust evident in Washington—for instance, most of candidate Trump’s primary opponents practiced their war dances while saying they would impose a no-fly zone and shoot down Russian planes to enforce it. That bit of madness alone should disqualify someone from ever sitting in the Oval Office. But if President Trump claims to be a leader, he should set as a priority normalizing relations between Moscow and Washington.

On many issues, the president appears to have fallen afoul of Washington’s conventional wisdom. But on Russia, his meeting with Putin suggests that he continues to resist the Blob, as his predecessor called the vested interests which work so hard to frustrate the slightest innovation in foreign policy. On this issue President Trump could make a huge difference.

Russia matters. For this reason Washington needs to restore a working relationship with Moscow on multiple issues. That doesn’t mean trusting Vladimir Putin. It does mean making policy in accord with the way the world is, not the way we wish it was. Most important, America and Europe need to reach an accommodation with Russia that offers basic stability and security for both sides.

Doug Bandow is a senior fellow at the Cato Institute and a former Special Assistant to President Ronald Reagan. He is the author of Foreign Follies: America’s New Global Empire (Xulon).