Why America Should Not Be Asia's Globo-Cop 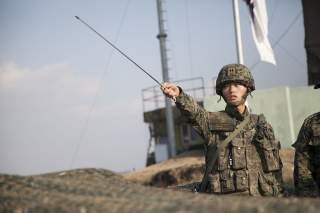 North Korea may be planning another missile launch. Otherwise unremarkable for little except its eccentricity and brutality, the Democratic People’s Republic of Korea may soon acquire the capability to attack the United States with nuclear weapons. Washington should disengage and leave the North Korea problem where it belongs, with the DPRK’s neighbors.

American involvement in the Korean peninsula dates back more than a century, but Japan’s absorption of the small kingdom ended any official relationship. After Tokyo’s surrender in 1945 the United States and Soviet Union divided the former Japanese colony, leading to the creation of two competing states and ultimately war in 1950.

Only Washington’s intervention prevented the DPRK from conquering the Republic of Korea. For years the impoverished and authoritarian ROK was vulnerable to a renewed North Korean attack, especially if backed by Moscow and Beijing. So U.S. forces created a military tripwire.

But that threatening world disappeared long ago. South Korea began its economic take-off in the 1960s, racing past the North. The 1972 U.S. opening to the People’s Republic of China reduced tensions between the two Koreas’ respective patrons. The collapse of Soviet communism and Maoist madness meant Pyongyang would fight alone in any future conflict. Today both Russia and China have far greater economic relations with the South than the North.

Moreover, the ROK has surpassed North Korea on every significant measure of national power other than military. Even so, South Korea possesses a qualitatively superior force and “is now strong enough to take on [the DPRK military] without outside assistance,” as argued by the National Interest’s Dave Majumdar.

Seoul’s military deficiencies reflect not lack of resources but reliance on America for defense. Why devote scarce resources to the armed forces which instead can be used for economic development and other purposes? Seoul consequently is looking beyond defense to develop a blue water navy and become a space power.

Which means America’s role in protecting the South should have ended years ago. Foreign policy should be adapted to circumstances. None of the original reasons for protecting South Korea remain relevant. The claim that a security commitment created more than six decades ago remains as relevant as before is absurd on its face.

In any case, the United States should threaten war only for very significant, even vital, interests, and when there is no alternative means to achieve America’s ends. Washington helped set up the circumstances leading to the 1950 invasion, which was widely seen as beginning a much broader communist push for world domination. The ROK was incapable of defending itself, in part because American officials denied Seoul American heavy weapons. The Truman administration could ill afford to stand by and allow its young client state to be overrun.

Today the Korean Peninsula remains one of Asia’s chief flashpoints. Yet the peninsula is no longer critical for U.S. security. The Koreas no longer play a part in an overarching global struggle. An intra-Korean war would be tragic but would not threaten U.S. security. Such a conflict would matter much more to neighboring states, especially China and Japan, which have a corresponding incentive to do more, absent American intervention. Humanitarian concerns would be real, but would not warrant war.

In any case, the alternative to Washington providing defense welfare to the ROK would be Seoul using a little more of its extraordinary wealth to create an armed forces capable of deterring and, if necessary, defeating the North. The South’s advantages are dramatic: it possesses one of the world’s largest and most advanced economies, upwards of 40 times the size of the DPRK’s economy. South Korea has twice the population and a large international support network compared to essentially none for Pyongyang.

Yet today America remains entangled in Korean affairs and worried about threats from a small, distant, and impoverished state which under normal circumstances shouldn’t even register in Washington. Indeed, despite its manifold commitments around the world, Secretary of State John Kerry recently promised the United States would do “whatever is necessary” to defend the ROK. The Pentagon plans to deploy an extra armored brigade to the South. Some analysts, such as Alexander Kim with the American Foreign Policy Council, would further deepen U.S. involvement by returning U.S. tactical nuclear weapons to the peninsula.

With cause, some policymakers believe the DPRK poses the most significant security challenge for the next administration. Although no one knows North Korea’s nuclear capabilities, they clearly are advancing. Pyongyang has accumulated sufficient materials for as many as 20 nuclear weapons today and by 2020 could have 50 to 100 devices, thereby joining second tier nuclear powers Israel, India, and Pakistan. No doubt the Kim regime is working to miniaturize warheads, which would allow their use on missiles. And the North is making progress, despite occasional well-publicized failures, in developing long-range missiles capable of targeting North America.

There is no indication that Kim Jong-un is suicidal and contemplates a first strike on America—all of the ruling Kims appeared to want their virgins in this life, not the next, unlike Islamic jihadists. But the ability to hit U.S. military facilities throughout the Asia-Pacific and possibly devastate a few U.S. cities could—and certainly should—deter American involvement in any Korean conflict. No wonder James Clapper, Director of U.S. National Intelligence last month opined that the North Koreans view nukes as “their ticket to survival.”

Which is bad for America. Ending up on the target list of an unpredictable, untested, and headstrong dictator creates the possibility of nuclear war through mistake or inadvertence. Washington had few alternatives but to challenge the Soviet Union during the Cold War; in contrast, North Korea is a confrontation of choice, resulting from the costly determination of American policymakers to be essentially everywhere forever.

The latest Chicago Council on Global Affairs survey finds more public support for the U.S. military presence in the ROK than either Germany or Japan. Yet what justification is there for garrisoning the South?

As noted earlier, neither the existence of a global struggle with a hegemonic enemy nor the peninsula’s unique strategic importance. And the reason certainly is not the lack of powerful neighbors with an interest in maintaining regional stability. Analyst Khang Vu claimed that America must maintain its troops in Korea, as well as presumably everywhere else, forever, to maintain “credibility.” However, security guarantees should fit circumstances, not be treated as permanent even when the dependent party outgrows the need. Wasting resources and fighting unnecessary wars in the name of looking strong is both expensive and dangerous.

Other arguments are equally unconvincing. For instance, Vu makes a classic mercantilist argument stretching back to the imperialist European powers: use the military to enhance trade. This always was a highly costly practice, enriching a few merchants at public expense, yet Vu contends that Washington should act similarly to safeguard Asian trade.

Such commerce obviously is greatest interest to the Asian nations themselves. Despite the perennial Washington conceit that the only thing which saves the world from daily Armageddon is far-sighted American leadership, there is no evidence that the region would be at war absent America playing the role of globo-cop. Seven decades after the end of World War II the Asia-Pacific has recovered and its leading members should take over their own defense duties — deterring enemies and maintaining stability. After all, that’s what serious countries normally do, instead of expecting rich friends to constantly coddle them.

Moreover, the cost of risking war for profit grows as the North’s capabilities increase. Vu blithely asserts that “a damaged trading system in East Asia resulting from conflicts would cost America a higher price than that of maintaining its military presence.” But a war involving Korea would not prevent China, Japan, or most other Asian nations from continuing to do business with each other and America.

Moreover, the true expense for the United States includes creating additional military units to fulfill commitments, including the enormous back-up capability which would be called upon in any conflict, and maintaining this oversize armed forces year after year. That’s not worth the profits from business with a mid-sized trading partner such as Korea. And none of this would be worth war, especially with an emerging nuclear power. Just how much blood should be shed to safeguard business profits?

Another common claim is that the U.S. presence prevents a regional arms race. However, with the PRC both arming itself and following a more assertive foreign policy, a regional arms race is precisely what may be necessary to constrain Beijing’s potential ambitions. Just as China is seeking to deter America from intervening in regional conflicts, the PRC’s neighbors should make any Chinese aggression too costly to undertake. The claim that Americans should arm and prepare for war so the peoples directly at risk don’t have to is bizarre at best.