Why Not a South Korean Nuke? 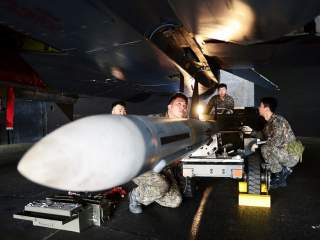 The Democratic People’s Republic of Korea continues its relentless quest for nuclear weapons and long-range missiles. Its Special Forces and unconventional tactics—such as tunnels under the Demilitarized Zone—threaten to disrupt allied operations. While most of its conventional weapons are decrepit, Pyongyang still could wreak havoc in Seoul with artillery and Scud missiles.

The South is attempting to find an effective response. It closed Kaesong industrial complex, which provided the North with nearly $100 million in hard currency annually. Seoul also is talking with the U.S about installing the Terminal High Altitude Area Defense, or THAAD system. Nevertheless, neither of these steps is likely to much affect Pyongyang’s behavior.

Although the DPRK is unlikely to attack since it would lose a full-scale war, the Republic of Korea remains uncomfortably dependent on America. And Washington’s commitment to the populous and prosperous ROK likely will decline as America’s finances worsen and challenges elsewhere multiply. Seoul could find itself ill-prepared to deter the North.

In response, talk of reviving the South’s nuclear option is growing. Won Yoo-cheol, parliamentary floor leader of the ruling Saenuri Party, told the National Assembly: “We cannot borrow an umbrella from a neighbor every time it rains. We need to have a raincoat and wear it ourselves.”

Won is not alone in this view. Chung Moon-jong—member of the National Assembly, presidential candidate, and Asan Institute founder—made a similar plea two years ago. He told an American audience “If North Korea still refuses to surrender its nuclear weapons then we have to make the ultimate choice.” That is, “if North Korea keeps insisting on staying nuclear then it must know that we will have no choice but to go nuclear.” He suggested that the South withdraw from the Nuclear Nonproliferation Treaty and “match North Korea’s nuclear progress step-by-step while committing to stop if North Korea stops.”

The public seems inclined to follow such advice. Koreans’ confidence in America’s willingness to use nuclear weapons in defense of the ROK has declined, while support for a South Korean nuclear program is on the upswing, hitting 66 percent in 2013. Nearly a third of people “strongly support” such an option.

While President Park Geun-hye’s government remains formally committed to the NPT, Seoul has conducted nuclear experiments and resisted oversight by the International Atomic Energy Agency. Like Japan, the ROK could develop a weapon quickly if it chose to do so, perhaps in a matter of months.

Of course, the idea triggers a horrified reaction in Washington and among those committed to nonproliferation.

Unfortunately, in northeast Asia today nonproliferation operates a little like gun control in the United States: only the bad guys end up armed. China, Russia and North Korea all have nuclear weapons. America’s allies, Japan and South Korea, do not, and expect Washington to defend them. To do so the United States would have to risk Los Angeles to protect Seoul and Tokyo—and maybe Taipei and Canberra as well, depending on how far Washington extends the “nuclear umbrella.”

While America’s overwhelming nuclear arsenal should deter anyone else from using nukes, conflicts do not always evolve rationally. If Washington’s nuclear commitment is triggered, even inadvertently, the United States would find itself wandering down a completely unexpected and dangerous path. South Korea and Japan are important international partners, but their protection is not worth creating an unnecessary existential threat to the American homeland. Indeed, the potential price of initiating nuclear war actually reduces the credibility of Washington’s commitment and thus its deterrent value.

Better to create a balance of power in which the United States is not a target if nukes start falling. That would be achieved by independent South Korean and Japanese nuclear deterrents. Such a prospect would antagonize, perhaps even convulse, China. But then, such an arsenal would deter the People’s Republic of China as well as DPRK—which also would serve American interests.

Moreover, the mere threat of spreading nuclear weapons might end up solving the problem. That is, when faced with the prospect of Japanese and South Korean nuclear weapons, China might come to see the wisdom of applying greater pressure on the North—most importantly, cutting off energy and food shipments. The U.S.-ROK discussions over THAAD appeared to touch a nerve in Beijing, and Xi Jinping’s government indicated its willingness support a UN resolution imposing more pain on the North for its latest nuclear launch. That declaration might end up being mostly for show, but maybe not. And the prospect of having two more nuclear neighbors would concentrate minds in Zhongnanhai.

Abandoning nonproliferation is not a decision to take lightly. No one wants a nuclear arms race. More nuclear powers mean more possibilities of misuse or mistake. Moreover, China might retaliate by accelerating its own nuclear development

But the PRC already is improving its nuclear forces to diminish Washington’s edge. And allowing North Korea to enjoy a unilateral advantage creates a different, and even greater, set of dangers. The right trade-off isn’t obvious.

Which is why policymakers should consider the possibility of a nuclear South Korea. The NPT does not necessarily triumph over other security concerns. Keeping America entangled in the Korean imbroglio as Pyongyang develops nuclear weapons is a bad option which could turn catastrophic. Blessing allied development of nuclear weapons might prove to be a better alternative.

Park Chung-hee was a brute, determined to stifle political freedom while focusing on economic development. But his desire for an ROK nuclear weapon looks prescient. Maybe it’s time for the good guys in northeast Asia to be armed as well.