Why Is Trump Turning His Back on Christians in Iran? 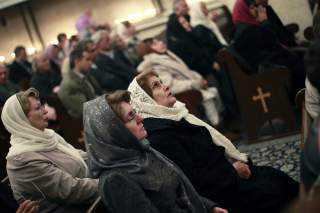 President Donald Trump presented himself as a defender of Christians. However, his administration recently rejected asylum applications from more than a hundred Iranian Christians. They desperately need sanctuary: the Islamic Republic is among the world’s worst religious persecutors. Does the president dislike foreigners more than he likes Christians?

The Iranians, including other non-Muslims and residents of other nations, have been stuck in Vienna for more than a year hoping to resettle in America. They applied under the Lautenberg Amendment, which originally was passed to protect Soviet Jews. Over the years roughly thirty-three thousand Iranian religious minorities have entered the United States under its protection. Almost 1,300 were admitted under the program last year. Approval of applicants, who are interviewed before traveling to Vienna, where U.S. officials screen them, was standard. According to Foreign Policy’s Dan de Luce: “Apart from Assyrian and Armenian Christians in Iran, members of the Jewish, Mandaean, Zoroastrian, and Bahai communities have also received refugee status and resettled in the United States under the law.”

But not this time. The Department of Homeland Security just told them no. The law requires the government to justify any denial “to the maximum extent possible,” but DHS offered no explanation. The State Department reported the obvious: program changes had resulted in “a greater number of denials in the Vienna refugee program,” like 100 percent. The question remains why.

Those rejected hope to find homes elsewhere, but after Washington’s decision Austrian police raided the waiting Iranians. They could be deported back to Iran, leaving them subject to the not-so-tender mercies of the reigning Islamist regime. Another 4,500 have registered for the program, but now seem destined to languish in Iran.

Ann Buwalda of Jubilee Campaign complained: “The U.S. has broken its promise to Iranian religious minorities.” The refugees had “traveled to Vienna at the invitation of the United States, with the understanding that they would soon be reunited with their American families.” They gave up their homes and incomes, and face persecution if they return to Iran.

The decision is inexplicable given administration policy toward Iran. Hans Van de Weerd of the International Rescue Committee highlighted the administration’s hypocrisy: “It criticizes the Iranian regime, encouraged the protests, but refuses to provide safety to those who flee and are not safe from the Iranian government.” One congressman told de Luce: “This sudden change in policy—from almost a hundred percent acceptance rate to nearly complete rejection—makes no sense, even on security grounds.”

Until now, at least, the Trump administration claimed religious liberty as a priority. In fact, the president designated January 16 as Religious Freedom Day and called America a “champion for religious freedom around the world.” Last October when visiting the Middle East Vice President Mike Pence declared that “Christianity is under unprecedented assault in those ancient lands where it first grew,” adding: “we can now see a future in many areas without a Christian faith. But tonight, I came to tell you: Help is on the way.”

Even more important has been the administration’s campaign against, even fixation with, Iran. The president has taken the lead, at times acting against the advice of his own officials. He is seeking to overturn the nuclear deal, create a Middle Eastern coalition against Tehran, and promote discontent within the Islamic Republic. President Trump even made human rights in Iran an issue, in contrast his approach to most other abusive nations, such as Egypt, Saudi Arabia and Turkey.

Tehran deserves to be targeted for its systematic violation of human rights. The Islamic Republic, under control of Islamist authoritarians, is particularly hostile to religious minorities, who range from Christians and Jews to more traditional faiths including Baha’is, Zoroastrians, Mandaeans and Yarsanis. The country ranks number ten on Open Doors’ World Watch List. In some nations the problem arises from a hostile population. In Shia-majority Iran the blame overwhelmingly falls on a repressive leadership, increasingly out of step from much of the population.

At greatest risk are converts, who technically face the death penalty, though it has yet to be applied. However, attacks on religious minorities are widespread. For instance, the latest UN Human Rights Council report on Iran noted that “members of religious and ethnic minorities continued to endure abuses and discrimination and face persecution, including arrest and imprisonment, expulsion from educational institutions, denial of economic opportunities, deprivation of the rights to work, closure of businesses, and the destruction of religious sites, such as cemeteries and prayer centers.”

The Council’s Secretary-General declared Baha’is to be the country’s “most severely persecuted religious minority.” Last October the council declared that “persecution of members of the Baha’i community remained unabated.” They were variously imprisoned and denied economic and educational opportunities. However, they were not alone. The leader of the Assyrian Pentecostal Church and at least eleven converts “were reportedly convicted of ‘acting against national security and received heavy prison sentences’.”

These assessments are backed and amplified by others. For instance, the United Kingdom’s Christians in Parliament All-Party Parliamentary Group published a report on persecution. Tehran refused to allow members to visit after the election of President Hassan Rouhani. Nevertheless, the caucus moved ahead, noting that “Christians continue to be arbitrarily arrested and interrogated because of their faith-related activities. They continue to be treated harshly, with some facing severe physical and psychological torture during periods of detention.”

Iran’s judiciary, which makes no pretense of independence and objectivity, treats innocent “Christian activities (such as meeting in private homes for prayer meeting and bible studies, or being in contact with Christians outside of Iran) as political activities that threaten the national security of Iran.” Believers are imprisoned, churches are closed, congregations are pressured to end Persian language services, property is seized, and Christians face educational and employment discrimination. These violations of basic liberties have continued despite the election of Rouhani, who as a candidate declared that “All ethnicities, all religions, even religious minorities, must feel justice.” Alas, they do not.

The 21st Century Wilberforce Initiative reported that the Tehran “government regularly discriminates against its citizens based upon religion and belief.” Law is supposed to be based on Islam. The prohibition on apostasy is “a severe threat to religious freedom.” At least people of the book, most notably Christians and Jews, theoretically enjoy some legal standing. In contrast, Baha’is “are without any kind of protection.”

Amnesty International reported that “freedom of religion and belief was systematically violated, in law and practice,” in Iran. Victims were many. “Widespread and systematic attacks continued to be carried out against the Baha’i minority,” including “arbitrary arrests, lengthy imprisonment, torture and other ill-treatment, forcible closure of Baha’i-owned businesses, confiscation of Baha’i properties, bans on employment in the public sector and denial of access to universities.” Other unrecognized minorities, such as the Yarsani, “also faced systematic discrimination.” Moreover, “the right to change or renounce religious beliefs continued to be violated.” Sunni Muslims faced discrimination. And atheists “remained at risk of arbitrary arrest and detention, torture and other ill-treatment and the death penalty for ‘apostasy’.”

In January Human Rights Watch offered a similar assessment of discrimination and ill-treatment. The Tehran regime’s record for religious liberty is “dismal.” Yet “there were new signs of discrimination against religious minorities.” Also, last month human-rights experts associated with the Office of the High Commissioner for Human Rights “called on Iran to ensure a fair and transparent final hearing” for three Christians charged with evangelizing and holding home services. They were charged with violating national security.

Last fall Kamil Alboshoka of Track Persia noted that “Persecution in Iran against religious and ethnic minorities has been heavily practiced since the advent of the current regime in 1979. [A] [l]arge number of minorities has been executed, detained or tortured because of legitimate demands.” Moreover, Tehran used capital punishment “to silence political opponents, religious and ethnic minorities.” In addition, “minorities in Iran suffer from marginalization, oppression, and lack of equal civil rights because the Iranian law does not protect and support minorities.”

Christian and Sunnis alike “have been banned from traveling outside Iran or have been displaced and forced to live outside their cities due to their religious activities.” At the same time, “Large number of Iranians from minorities have faced detention due to converting to different faiths.” Accused apostates face “severe charges such as threats to national security.” Alas, human-rights activists warn of “worsening marginalization and racist abuse inflicted by the regime during a brutal political crackdown on dissents who are angry at lack of basic civil liberties and cultural, political and social rights.”

The U.S. Commission on International Religious Freedom rates Iran as a Country of Particular Concern. The panel’s report last year reported that “the government of Iran engaged in systematic, ongoing, and egregious violations of religious freedom, including prolonged detention, torture, and executions based primarily or entirely upon the religion of the accused.” The Commission noted that “severe violations targeting religious minorities . . . continued unabated.”

Sufis and “dissenting Shi’a Muslims also faced harassment, arrest, and imprisonment.” More than six hundred Christians have been arrested since 2010, and “there were numerous incidents of Iranian authorities raiding church services, threatening church members, and arresting and imprisoning worshipers and church leaders, particularly Evangelical Christian converts.” The regime “continued to propagate anti-Semitism and target members of the Jewish community on the basis of real or perceived ‘ties to Israel’.” Further, “the government continues to use its religions laws to silence reformers—including human-rights activists, journalists, and women’s rights advocates—for exercising their internationally protected rights to freedom of expression and religion or belief.” The number of those imprisoned increased after Rouhani’s election.