Why Washington Is Addicted to Perpetual War 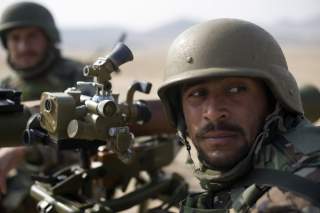 The last two administrations have followed a bipartisan policy of constant war. Unfortunately, the consequences have been ugly: every intervention has laid the groundwork for more conflict.

Yet the architects of this failure claim that all would be well if only Washington had acted more often and more decisively. In their view, the problem is not that America goes to war, but that it doesn’t go to war nearly enough.

This approach is based on the belief that Washington is capable of solving every international problem. If only unnamed bright people implemented theoretically brilliant strategies backed by unidentified resolute citizens, terrorism would be suppressed, ISIS would be defeated, Russia would be compliant, Iraq would be successful, Syria would be peaceful, Libya would be united and China would be respectful.

Alas, our experience suggests that such people and policies don’t exist. Otherwise, why would recent military operations have turned out so badly? If the right conditions for success weren’t present in the last fifteen years, why should we expect them to occur in the next fifteen?

The biggest problem is the belief in immaculate intervention. More troops should have stayed longer, more bombs should have been dropped, and more no-fly zones should have been established. Advocates rarely bother to explain the practical requirements and consequences of those policies.

For instance, no intervention is more universally criticized by serious foreign policy analysts than the Iraq invasion. That war triggered widespread sectarian conflict; caused the deaths of hundreds of thousands of Iraqis; wrecked the historic Christian community; spawned Al Qaeda in Iraq, which morphed into ISIS; and empowered Iran.

The official neoconservative line, however, is that the war was a great success won by President George W. Bush. Victory was squandered by President Barack Obama, who withdrew U.S. forces.

Yet Bush, with troop levels at their highest, providing maximum leverage, was unable to win Iraqi consent to a status-of-forces agreement, essential for any U.S. garrison. Had Washington attempted to force Baghdad to accept continued occupation, U.S. troops would have been targeted by Shia extremists as well as Sunni terrorists.

The only way America could have blocked the rise of ISIS and ousted Iraq’s sectarian regime would have been to intervene militarily, with potentially disastrous consequences. There was no domestic support for such a course after the Bush administration’s earlier failed promises and unrealistic predictions.

Intervention in Libya, it is said, would have worked if only the West had intervened to nation build. Yet people the world over want to rule themselves. Having overthrown the Qaddafi government, victorious Libyan forces wouldn’t have welcomed a U.S. occupation force. There is no reason to believe the results of such an effort would have been any better than in Afghanistan or Iraq.

In Syria, contend committed interventionists, America should have acted against Bashar al-Assad. He would have been overthrown, the Syrian Thomas Jefferson and George Washington would have taken charge, and ISIS would never have emerged. It’s a great story, but overlooks the rise of sectarianism after America overthrew Iraq’s secular dictator. Defenestrating Assad would have merely triggered the next stage of a bitter struggle for control.

Nor was there domestic U.S. support for greater involvement: opposition to air strikes was overwhelming when the administration tossed the issue to Congress. Belief that halfhearted involvement would have led to swift victory by so-called moderate insurgents ignored the latter’s consistently disappointing experience.

In Afghanistan, a continued U.S. military presence is supposed to allow the Kabul government to create a stable, efficient, honest democracy in Central Asia. Yet the Afghan authorities are losing ground after fifteen years, despite support from tens of thousands of allied military personnel and the expenditure of hundreds of billions of dollars. Keeping a few thousand combat personnel on station will only slow the collapse of a government known mostly for corruption and incompetence.

Another claim is that had the Obama administration enforced the president’s infamous “red line” on chemical weapons in Syria, Washington would have had the credibility to stop Russia from seizing Crimea and China from pushing its territorial claims in the Asia-Pacific. However, acting on a foolish promise for war is worse than sacrificing a bit of credibility. Anyway, every U.S. attempt to pressure nuclear-armed Moscow and Beijing forces them to demonstrate that they will not be intimidated by Washington.

America’s disastrous experience with promiscuous intervention cannot be salvaged by playing “what if” games. Doing more of the same only guarantees more of the same result. The U.S. should stop spending hundreds of billions more dollars it doesn't have in a doomed attempt to micromanage the globe.

Doug Bandow is a Senior Fellow at the Cato Institute. A Foreign Policy Fellow and Scholar with Defense Priorities, he also is a former Special Assistant to President Ronald Reagan.