Will Another Pivot to Asia Be Lost in a New Middle Eastern War? 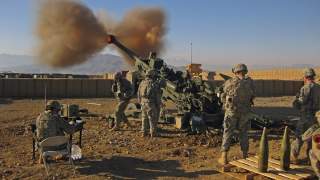 It’s a toss-up whether the most important international event last week was the cruise missile attack on Syria or the summit between Presidents Donald Trump and Xi Jinping. For the United States, Asia is the most critical region, with growing economic opportunities and security challenges. However, the Middle East seems to forever monopolize Washington’s attention and swallow up its resources.

President Trump’s approach towards China has been in almost constant flux. During the campaign he focused on Beijing’s alleged trade manipulation. After the election he seemed to question several other elements of the bilateral relationship, including the understanding that there is only “one China.” When testifying before the Senate Secretary of State Rex Tillerson suggested coercing Beijing to take a tougher stance toward North Korea. He also appeared to propose blockading islands and other territories claimed by the People’s Republic of China.

But Tillerson downplayed these and other controversies during his visit to Beijing last month. He appeared to adopt his hosts’ approach when he described the bilateral relationship as one of “nonconflict, nonconfrontation, mutual respect and win-win cooperation.” News reports indicated that he was tougher in private, though that had any practical impact was not clear. After Tillerson’s return the administration kept up its pressure on China to toughen the latter’s stance toward Pyongyang, with the president threatening to “solve the problem” alone, taken as a threat of military action, and backing his talk with the deployment of a carrier off the Korean coast.

No one knew what to expect when the two leaders met. The American president was at a distinct disadvantage. He knew nothing about China, while Xi had spent time in America, and had few trusted officials knowledgeable about the PRC, with most of State Department’s political positions still unfilled. President Trump also was known to be reluctant to endure the sort of detailed briefings which could help redress his personal limitations.

Although at past summits the U.S. typically prepared active agendas with specific demands, none seemed evident this time. The main objective appeared to be for the two leaders to get better acquainted and demonstrate that they could behave civilly toward one another.

They met this very low standard. Before Xi’s arrival Secretary Tillerson acknowledged “the challenges China can present to American interests,” but the administration’s predictions and assessments were uniformly positive. President Trump naturally exhibited his penchant for overstatement, declaring: “The relationship developed by President Xi and myself I think is outstanding. We look forward to meeting together many times in the future.” In briefing the press Tillerson similarly cited as positive “both the atmosphere and the chemistry between the two leaders.”

To the uninitiated this might appear to be a modest accomplishment at best. At the Thursday dinner President Trump admitted: “So far, I have gotten nothing. Absolutely nothing. But we have developed a friendship.” Indeed, he expected that “we are going to have a very, very great relationship.”

It is hard to imagine President Xi describing their encounter to his colleagues in similar terms—having become good buddies with the mercurial American after a few hours of conversation. Nevertheless, the latter suggested that this personal connection would yield policy benefits: “I think we have made tremendous progress in our relationship with China.” As a result, said President Trump, “lots of very potentially bad problems will be going away.”

The two sides agreed to a new and enhanced dialogue to cover security, economic, law enforcement and social issues. Perhaps the most detailed measure was a hundred-day plan to address trade issues. Admitted Commerce Secretary Wilbur Ross: “This may be ambitious, but it’s a big sea change in the pace of discussions.”

Of course, the existence of a “plan” doesn’t mean anything will actually be decided, and at any particular time. Nor does another negotiating forum guarantee any particular policy change, presumably the Trump administration’s objective. After all, last year President Trump proclaimed: “We can’t continue to allow China to rape our country, and that’s what they are doing.” If true, they are still doing so today, after the meeting.

There were nonspecific promises of cooperation, perhaps most importantly regarding North Korea. Secretary Tillerson admitted that “There was no kind of a package arrangement discussed to resolve this,” but he said that President Xi agreed the issue was at a “very serious stage.” Again, what that meant in practice remains unclear.

After the meeting President Trump focused his tweets on this area, offering trade benefits in return for the PRC taking unspecified action against the North. Yet he acknowledged that after listening to President Xi he realized that it wasn’t so easy for China to “solve” the North Korea problem. President Trump also announced that he no longer believed Beijing to be a currency manipulator, while declaring that he believed President Xi “wants to help us with North Korea.”

President Trump cited China’s latest rebuff to North Korean coal ships, but that merely implements a decision announced late last year. More significantly, the semi-official Global Times newspaper suggested that Beijing might be willing to end oil shipments if Pyongyang staged another nuclear test. Whether this was a serious threat against Pyongyang or a negotiating offer to Washington remains to be seen. An agreement might be possible, but much more serious negotiation would be required to close a deal.

The summit meeting appears to have been a draw of sorts. None of the disasters imagined as likely from a confrontation between the ill-prepared former real estate operator and seasoned political pol occurred. President Trump appeared to orchestrate a civil dialogue with the Chinese leader even if they weren’t “friends” as most people understand the word. Trump did not bungle his most important meeting yet with a foreign leader.

As for President Xi, he met the U.S. president as an equal. The Chinese leader offered no specific concessions that we know of, despite some tantalizing hints on North Korea, while seemingly developing a smooth relationship with the unpredictable U.S. president. Avoiding disruptive conflicts leading up to the Chinese Communist Party’s national congress this fall obviously benefits Xi.

There has been much speculation on the impact of President Trump’s decision to strike Syrian forces. Although the timing of that attack was driven by Syria’s apparent use of chemical weapons, some observers speculated that the action had the unplanned benefit of demonstrating to Xi the administration’s willingness to use military force.

However, Beijing could not have missed America’s oft-demonstrated military prowess around the world. Moreover, Chinese officials are aware that previous U.S. administrations threatened to attack the North—but did not follow through for good reason. North Korea has a conventional capability to devastate if not destroy much of Seoul, which sits around thirty miles from the border. Tossing a few missiles at an air base in Syria, a country ravaged by civil war, is quite different than bombing nuclear facilities in the North, which has front-loaded its conventional military forces and already has or soon will have a deliverable nuclear capability.

Undoubtedly the diversion irritated the Chinese leader, who likes to maintain control over events and images. President Xi’s visit ended up largely ignored in America in the midst of dramatic coverage of what could become America’s newest Middle Eastern war. On the other hand, the PRC prefers that Washington’s attention and resources remain anywhere but Asia. Something similar happened with the infamous Obama administration “pivot,” which lost much of its practical impact when Washington shifted its focus back to Europe and the Middle East, never to return to Asia.

Foreign Policy’s James Palmer noted that Beijing is quite aware of America’s military strength, but what the former is “continually and pleasantly surprised by is how stupidly the United States uses that strength.” For instance, while Washington fulfilled its obsession with the Middle East, “China was building factories, economic alliances, and artificial islands,” argued Palmer. Joining the Syrian imbroglio would provide Beijing with a similar opportunity in coming years.

Presumably the Mar-a-Lago meeting is merely the first of many to come. Indeed, the two presidents agreed to hold the next summit in China later this year. Hopefully the conversation will be civil and even cooperative. And perhaps it will help solve at least some of the problems President Trump spoke of. There is no more important bilateral relationship. Contrary to expectations, the Trump administration could end up improving those ties.