Would North Korea Attack the Olympics in 2018? (By the Way, They Will Be in South Korea) 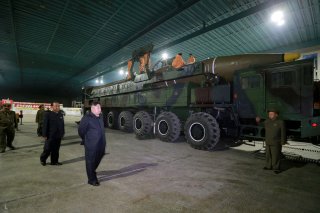 Editor's Note: In our latest Facebook Live interview (please like our Facebook page to see more of these events) Harry Kazianis, Director of Defense studies at the Center for the National Interest, and Christopher Preble, vice president for defense and foreign-policy studies at the Cato Institute, discuss the geopolitical outlook for East Asia.

Chris Preble recently wrote about the lack of a U.S. grand strategy. A portion of the article can be found below:

“The United States needs a new set of ideas and principles to justify its worthwhile international commitments, and curtail ineffective obligations where necessary,” argue Jeremi Suri and Benjamin Valentino, in the introduction to their edited volume Sustainable Security: Rethinking American National Security.

“Balancing our means and ends requires a deep reevaluation of U.S. strategy, as the choices made today will shape the direction of U.S. security policy for decades to come.”

Though rarely spelled out in such stark terms, this question would appear to be at the core of America’s grand strategy debate—if such a debate were actually occurring. We should ponder why it isn’t, and therefore why an arguably “unsustainable” strategy persists. (As the economist Herb Stein famously said, “If something cannot go on forever, it will stop.”)

I foresaw this problem not quite two years ago. “U.S. foreign policy is crippled,” I warned in testimony before the Senate Armed Services Committee:

by a dramatic disconnect between what Americans expect of it and what the nation’s leaders are giving them. If U.S. policymakers don’t address this gap, they risk pursuing a policy whose ends don’t match with the means the American people are willing to provide.

And I concluded as follows:

the military’s roles and missions are not handed down from heaven. They are not carved on stone tablets. They are a function of the nation’s grand strategy…

That strategy must take account of the resources that can be made available to execute it. Under primacy, in the current domestic political context, increasing the means entails telling the American people to accept cuts in popular domestic programs, higher taxes, or both, so that our allies can maintain their bloated domestic spending and neglect their defenses.

It seems unlikely that Americans will embrace such an approach. The best recourse, therefore, is to reconsider our global role, and bring the object of our foreign policy in line with the public’s wishes.

That hasn’t happened. Although public officials and thought leaders should frame strategy as a choice among competing ends (what we seek to achieve), and means (i.e. the resources that we are willing to apply to achieve them), they have stubbornly refused to do so. They have clung to the same strategic goals, and simply hoped that the obvious fiscal constraints would magically disappear.

Given his willingness to challenge the foreign policy establishment, Trump’s upset victory last year might have changed all that. But, so far, it hasn’t. Arguably, it’s gotten worse.