Waste of Time: Trump Wants to Cut Taxes to Battle the Coronavirus. 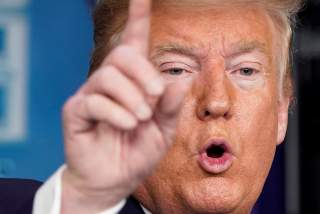 Donald Trump attacked Democrats at a mass rally in South Carolina ahead of the primaries and called coronavirus, which has infected over 85,000 people globally--and with now one American losing their life--a “hoax.”

The press is “in hysteria mode” for reporting on coronavirus, he added. Who might be those liberal hacks and talking heads who are hysterical about coronavirus?

Well, Fox News’s Tucker Carlson, for one, has said, “America is not ready for coronavirus.”

“Western leaders told us that the virus was under control and was unlikely to cause serious problems for anyone in our hemisphere. None of that was true.” Carlson was a little vague about which “Western leaders” he was referring to, but President Trump, who is the leader of the leading superpower in the West, said in January that coronavirus was “totally under control” and again this past week that coronavirus is “very much under control" and that the “Stock Market starting to look very good to me!”

Which is why the Trump administration is thinking about cutting taxes to respond to the coronavirus. If this is all a hoax, if the stock market and the economy generally is doing fine, if there’s nothing to worry about, then why the need to take action? Why are American arriving in the U.S. being told to self-isolate for two weeks?

There’s a contradiction between Trump’s downplaying of coronavirus and the policies in place. There’s a schism in the right-wing media’s response between those sensationalists and isolationists hyping a foreign-originated epidemic and those partisans following Trump’s “hoax” narrative. On the one hand, Rush Limbaugh, whom Trump awarded a Medal of Freedom to at the State of the Union, said, “the coronavirus is being weaponized … to bring down Donald Trump … the coronavirus is the common cold, folks!” On the other hand, Carlson says, “this is a real risk.”

Trump is following the Limbaugh line. At his February 26 press conference, Trump compared coronavirus to the flu: “The flu, in our country, kills from 25,000 people to 69,000 people a year.  That was shocking to me.”

Interestingly, that same misleading narrative has been pushed by multiple different groups with different agendas, including the Chinese Communist Party press, Kaiser Health News, and now Trump. As I pointed out in a previous article, the number of flu deaths, compared to coronavirus deaths, is likely inflated, because the CDC uses a mathematical model to estimate and counts anyone who might die from complications stemming from the flu. The mortality rate of the flu, moreover, is 20 to 30 times higher than the estimated mortality rate of coronavirus.

Tucker Carlson has said, “Countless publications wagged their fingers in the face of readers, and told them it was irrational, probably immoral in fact to worry more about the coronavirus than the annual flu. … Wokeness is a cult. They would let you die before they admitted that diversity is not our strength.”

Whoever thought Donald Trump would be accused of being “woke”?

The Trump administration is worried about the economy because the Dow dropped by over 3,000 in the past week. Coronavirus has already disrupted China’s economy. Most service sector businesses are still entirely closed, while offices and factories are only at partial capacity. Global supply chains are threatened, even if coronavirus does not get worse within the United States.

However, tax cuts, interest rate cuts, and really any other economic policy implemented by the government would not be able to solve the economic problems that could be caused by coronavirus. The problem is not merely the objective health risks of disease but the fear caused by an epidemic and how consumers will respond to it.

If people become afraid of catching coronavirus and decide to stay indoors, then demand will be down. Giving people or corporations another tax cut will not ease people’s fear of coronavirus. Nor would tax cuts increase output at factories that are still shutdown.

Tourism will be down. Chinese tourists, who make up the largest share of the international travel industry, have been blocked from entering the U.S., but they would not be eager to travel, anyway, given the circumstances. Now travel to major markets like Italy and Japan will be directly impacted, while the general uncertainty will affect travel the world over.

Simply put, coronavirus’s impact on the economy is both a consumer confidence issue, as well as a supply-chain and labour-supply issue, which cannot be fixed by any policy.

As far as increasing consumer confidence goes, the Trump administration isn’t helping with its public statements. Calling it a “hoax” will not increase the public’s confidence that the administration takes coronavirus seriously. Politicizing coronavirus and blaming the Democrats makes it seem like they are prioritizing politics over public health. (Trump’s rantings and ravings about the Korean film that won Best Picture, Parasite, don’t inspire confidence, either…)

It’s not just Trump, with his famous fabulist vernacular. Larry Kudlow, who is also on the coronavirus response team (no wonder their solution is tax cuts), said, “It's pretty close to air-tight.” Such exaggerations cause many to distrust them.

I have written before: there’s no reason to panic. Coronavirus really isn’t as bad as Ebola or the zombie disease in another acclaimed Korean film, Train to Busan. Most Americans are more likely to die from a car crash or a gunshot. It shouldn’t be a huge problem if it’s managed well. But for the government to manage it well, they have to take it seriously first.