NO ONE can accuse Robert Merry of thinking small. On top of a long and distinguished career in high-level Washington journalism (including the editorship of this magazine), he is the author of a fine biography of Joseph and Stewart Alsop, a cautionary tract on “missionary zeal” in American foreign policy, and a well-received volume on James K. Polk and the war with Mexico. Borrowing from the title of the latter book, one might describe him as a writer “of vast designs.” His latest work is a relatively slender book about a big topic: the way in which we view and remember our presidents—or, as he calls it, “The Great White House Rating Game.”

Serious attempts at comprehensive presidential rankings are relatively recent and have tended to reflect the views of noted scholars, prominent journalists and eminent biographers. The first such survey was published by Harvard historian Arthur Schlesinger Sr. in 1948; the second also was conducted by Schlesinger in 1962. Both had fifty-five respondents. Over the next half century, several others appeared. Merry showcases efforts by the historian David Porter in 1981, journalist Steve Neal for the Chicago Tribune in 1982, historians Robert Murray and Tim Blessing in 1982, Arthur Schlesinger Jr. in 1996 and the Wall Street Journal in 2005. These were hardly the only such efforts. Neal did another in 1995 for the Chicago Sun-Times, and C-SPAN conducted notable surveys in 2000 and 2009. (I admit with neither pride nor chagrin to having participated in perhaps a half dozen of these exercises.) I wish Merry had included at least one of the C-SPAN polls in his reference list. These were based on ten relatively distinct, if occasionally vague, criteria. Nonetheless, his sample is sufficiently representative of the change and continuity that characterize the ratings game.

Just who gets asked? The answer seems to be mostly academics who have written on presidents or the office of the presidency. C-SPAN drew on scholars who had participated in the network’s remarkable American Presidency series. They likely were about as liberal and Democratic as the academics in Merry’s sample. Most of the professors asked to participate in the ratings game have been intellectual products of either the New Deal or the Great Society and members of a rather cozy liberal, academic establishment. A few contrarians aside, they tended to rank according to their political preferences. Two liberal Democratic politicos—Governor Mario Cuomo and Senator Paul Simon—participated in the Schlesinger Jr. effort.

The years 1981–1982 constitute a midpoint of sorts for the evaluations Merry selected; three were conducted during this brief period. At that point, thirty-eight men had preceded Ronald Reagan in the presidency. However, William Henry Harrison and James A. Garfield were not ranked because of the brevity of their tenures in office. Those who grade on a curve might assume bottom and top quartiles of eight presidents and a broad center of twenty. The 1982 Murray-Blessing poll, with its 846 participants, might be presumed to have more validity than the 1981 Porter endeavor (forty-one participants) or the 1982 Neal/Chicago Tribune survey (forty-nine participants), but the variations were inconsequential. In all three polls, one finds the same eight names at the top—Abraham Lincoln, George Washington, Franklin D. Roosevelt, Theodore Roosevelt, Thomas Jefferson, Woodrow Wilson, Andrew Jackson and Harry Truman—with only slight discrepancies in precise order. The bottom eight are also consistent—Millard Fillmore, Calvin Coolidge, Andrew Johnson, Ulysses S. Grant, Franklin Pierce, Richard Nixon, James Buchanan and Warren Harding. This congruence seemed to reveal a wide consensus, or at least similarity of impressions, among students and observers of the presidency.

Thirty years later, little had changed. The 2009 C-SPAN poll takes Wilson and Jackson out of the top eight and replaces them with John F. Kennedy (sixth) and Dwight D. Eisenhower (eighth). The top three—Lincoln, Washington and FDR—remain undisturbed, with Theodore Roosevelt not far behind them. The bottom eight display a bit more turnover. Hoover escapes only because C-SPAN ranked and gave a very low slot to William Henry Harrison. Grant, Coolidge and Nixon make it to a low-average rank.

If nothing else, the game proves that scholars and political junkies have opinions—or suppositions—about our various presidents and that these can change somewhat with time. But what are the evaluations based on?

IN 1962, President John F. Kennedy declined an invitation to participate in the second Schlesinger Sr. survey. He expressed his reasoning to Schlesinger Jr., who was serving as one of his White House aides: “How the hell can you tell? Only the president himself can know what his real pressures and real alternatives are. If you don’t know that, how can you judge performance?” Some “great” presidents, Kennedy believed, were acclaimed for decisions to which there was no realistic alternative. Others were beneficiaries of timing. Lincoln presided over victory in the Civil War, then was spared by death from having to manage the impossible problems of Reconstruction. Some were just plain overrated, Kennedy thought. Woodrow Wilson’s foreign policy had been a botch from start to finish. And just what did Theodore Roosevelt have to offer in the way of concrete accomplishments? (A strange query that seemed to ignore the origins of twentieth-century antitrust policy, a path-breaking conservation program, railroad legislation, the Pure Food and Drug Act, the Panama Canal and his receipt of the Nobel Peace Prize.)

Kennedy’s points, however exaggerated, suggest an even larger problem. How can anyone, however learned, authoritatively discuss, occupant by occupant, a position that has been held by forty-three individuals over a span of 223 years? And how can one juggle the problem of performance against the changing capabilities of an office that has grown from a single aide or two to a staff of thousands? How can one compare the presidency of the fledgling republic of 1789 to that of the global superpower of 2012? The only honest answer would seem to be that presidential evaluators are engaged in an imprecise and impressionistic endeavor, albeit one in which it is possible with diligent effort to muster plausible impressions.

Merry illustrates the point well. He obviously is well-read in American history and the presidency but less than comprehensively prepared. His bibliography ranges from authors he (and I) probably first read as students in college or graduate school many years ago—among them Henry Adams, Allan Nevins, Vernon Parrington and Benjamin Thomas—to recent names such as Stephen Ambrose, Robert Dallek, Joseph Ellis, David McCullough and Jon Meacham. He leans toward authors who write serious works for a wide audience. As a research base, this seems more serendipitous than systematic. James MacGregor Burns gets no listing, for example, as either an authority on the presidency or a major biographer of Franklin D. Roosevelt. Nor do the younger Arthur Schlesinger’s great, if overly reverential, works on The Age of Roosevelt appear. And surely a book of this sort needs to come to grips with Richard Neustadt’s influential Presidential Power. All that said, the author’s sources constitute a wide-ranging and solid group of studies.

JUST WHAT is his purpose? Adopting a light, conversational tone, Merry asks, “Wanna play?” The game that follows is one in which rules seem to be made up as we go along. But it is entertaining, and many readers will find it enlightening. At no time, however, does the author give us his own comprehensive list of ranked presidents. The exercise seems to be more about throwing darts (or javelins) at the evaluations of others. Many of the impalements seem well deserved.

Perhaps Merry’s most impressive achievement is an eight-page chapter entitled “The Making of the Presidency,” which explains the origins of the office at the Constitutional Convention. Our Founding Fathers, he tells us, created a chief executive who was less than an absolute monarch but more than a prime minister. Drawing authority directly from the people (as filtered through the mechanism of the Electoral College), the president was independent of the Congress and possessed the moral authority of a democratic mandate, albeit through a mode of selection that presumably would reject a Caesarist demagogue.

“What emerged was a matrix of shared powers binding the two branches and forcing them to work together in the course of governing,” he tells us. He also quotes Woodrow Wilson’s observation that if a president can win the admiration and confidence of the country, “no other single force can withstand him, no combination of forces will easily overpower him. . . . If he rightly interpret the national thought and boldly insist upon it, he is irresistible.”

Such an achievement, Merry tells us, would be immensely difficult, but its possibility would be the essence of a challenge “that has beckoned and diminished and elevated so many ambitious and forceful Americans absorbed by the call of destiny and the lure of greatness.” Surely, it was a challenge successfully met by most of the presidents who have been labeled great.

Pullquote: Nineteen men have served more than one term as president. Their collective experience demonstrates that it is very difficult to negotiate more than four years in the office without significant challenges.Image: 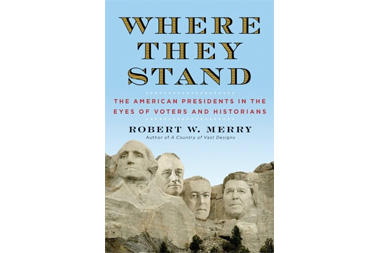