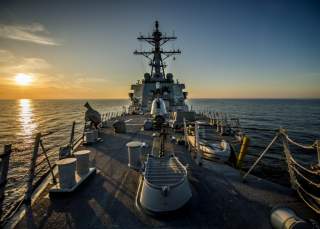 Kazianis: Over the last several years a spirited debate has taken place when it comes to the operational concept (OC) known as Air-Sea Battle (ASB). To this day there is still tremendous debate regarding ASB. The services, particularly yourself and the U.S. Navy as a whole, have worked to be open and honest concerning ASB. For once and for all, could you please describe for our readers what ASB is, its place in the future of America's armed forces, and why getting to a clear understanding of ASB is important?

Foggo: The ASB Concept is, simply put, a set of ideas that preserves freedom of access in the global commons in the face of emerging anti-access and area denial threats. It includes initiatives to improve doctrine, organization, training, materiel, leadership personnel and facilities within the Services’ purview to man, train and equip the Joint force.

An operational concept is a description of a method or scheme for employing military capabilities to attain specific objectives at the operational level of war. The overarching objective of the Air-Sea Battle Concept is to “gain and maintain freedom of action in the global commons.” The Air-Sea Battle Concept is not a strategy. Strategies, in contrast, describe ways and means to achieve a particular end or end state, such as deterring conflict, containing conflict, or winning a conflict.

The Air-Sea Battle Concept is about force development in the face of rising technological challenges. We seek to build, at the Service level, a “pre-integrated” joint force which empowers U.S. combatant commanders—along with allies and partners—to engage in ways that are cooperative and networked across the land, maritime, air, space and cyber domains and therefore to enhance our collective warfighting capability. Air-Sea Battle does not focus on a particular adversary or region. It is universally applicable across all geographic locations, and by addressing access challenges wherever, however and whenever we confront them.

As we continue to move forward, it is important to note that the ASB Concept and Implementation process is influencing the way the services man, train and equip their respective forces. In doing so, we are attempting to shape a joint force from the ground up, capable of assuring access where it matters, when it matters, that is poised to deliver prompt and credible combat power, if required, at a moment’s notice. This is one of the key takeaways about the concept and why a clear understanding of the concept is important.

Kazianis: Staying with ASB for the moment, there has been a series of articles speculating as to the costs of this budding OC. Some have noted a report totaling the cost of ASB at over $500 billion through 2023. While such a figure is certainly open for debate, is ASB affordable in a time of challenging defense budgets?

Foggo: The report by G-2 Solutions claims that the Services are projected to spend $524.5 billion dollars on ASB capabilities through 2023. Over half (53%) of that cost is on the Joint Strike Fighter (JSF) program alone. While the JSF certainly enhances counter A2/AD capabilities, the JSF program far predates the ASB Concept. To say that ASB is the sole driving factor in costs like the JSF is a mischaracterization. No defense-spending portfolio associated with joint operational access exists within DoD. Creating such a portfolio would likely drive unneeded confusion because a well-defined investment portfolio necessarily relies on specific scenario assumptions to scope the portfolio. Air-Sea Battle is by definition an enabling concept to a myriad of potential situations.

The Air-Sea Battle Office was tasked with creating an operational concept that addresses the problems created while operating in an anti-access and area-denial environment. This includes solutions not only from new technology, but also from utilizing existing forces and programs more effectively.

While some new capabilities and technology may be required, most of the ASB initiatives will rely on current service programs as their foundation. Existing equipment may be used in different ways, while other systems may need to be modified or upgraded. A significant portion of the effort will focus on non materiel solutions such as training and doctrine development. It is important to note that the services will continue to seek efficiencies and eliminate unnecessary redundancies through careful scrutiny of capability requirements, doctrine development and integrated training opportunities.

Prior to the ASB Concept, thoughtful investments during the past decade have helped to equip the Joint Force with capabilities necessary to operate within an A2/AD environment. The ASB concept will ensure U.S. forces continue to advance the capabilities required to ensure operational access and decisive power projection in support of America's national interests and those of our allies and partners as the A2/AD environment continues to evolve.

The Defense Strategic Guidance clearly tasks the Services to prepare to project power despite antiaccess and area denial challenges and ultimately, it is the Service Chief’s responsibility (through the Secretary of Defense and the President) to take into account the full spectrum of recommendations and requirements, including those involving joint operational access and fiscal constraints, when presenting the annual defense budget to Congress.

Kazianis: Moving on to strategies and weapons that ASB is looking to counteract, mainly the growing global challenge of anti-access/area-denial weapons (A2/AD), much has been made of various weapons that are supposed "game changers." These include the now-infamous Chinese DF-21D, or as the press likes to refer to it, the "carrier-killer" and various other missile-based weapons that seem to challenge American power projection on the high seas. While much ink has been spilled on US efforts to negate such challenges against our own military our allies—especially in the Asia-Pacific and Indo-Pacific—face such challenges as well. In what ways are we working with our allies to lesson such challenges now and in the future?

Foggo: The ASB Office is actively engaged with our partners in exercises and wargames, as well as in our concept development. As ASB continues to mature, we are sharing applicable elements with our allies and partners to further our efforts ensuring integrated and effective coalition forces. Since a key component of effectiveness in contested environments will be greater interoperability of U.S. forces, we will continue to emphasize the importance of interoperability to our allies and partners. We welcome coalition support to field capabilities that deter or defeat A2/AD threats. We will continue to look for opportunities to integrate our efforts with our allies to ensure unfettered access to the global commons in the face of A2/AD threats.

Kazianis: My final question revolves around the budding UCLASS project. While there is obviously a tremendous amount of potential regarding an unmanned, stealthy combat aircraft aboard US Navy carriers there has been a great deal of debate in the press as to the role of such a plane. In your view, what roles and missions do you believe are vital for a fully developed and operational UCLASS aircraft? Do you see UCLASS as more of a hard-nosed A2/AD killer—something that can break into A2/AD battle networks with a good deal of stealthy capability armed with precision-guided weapons, or something else?

Foggo: The most vital capability the UCLASS brings to the ASB Concept is the ability to complement the Carrier Strike Group and its air wing with an organic, persistent and survivable ISR platform able to endure in an A2/AD environment.