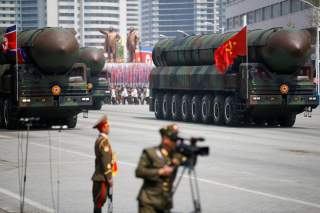 • Offering a peace treaty will be the dealmaker with North Korea and finally help bring the problem to an early close.

Front loading any negotiations with a peace treaty or peace regime (sometimes conflated with a “peace treaty”) is risky and ineffective because those discussions will quickly fall hostage to nuclear negotiations—sequencing is important. Smart negotiations never give away up front at a low cost what the opponent desires most. For North Korea and China, a peace treaty would provide the basis for demanding the withdrawal of U.S. troops from the Korean Peninsula.

The September 2005 Six-Party Joint Statement guaranteed a peace regime among other economic, political and security benefits in exchange for denuclearization. The understanding between South and North Korean negotiators at the time was that peace-regime discussions can begin after an agreed roadmap for dismantlement—the unchartered, third and final phase of denuclearization. Seoul and Washington have not taken a peace regime off the table since the Six Party Talks. But a peace regime or peace treaty absent denuclearization will not solve the nuclear problem.

• China can solve the North Korean nuclear problem for us.

China will not solve the North Korean problem for the international community because of its own strategic interests. Beijing is a major stakeholder in the equation and certainly knows how to use its economic leverage to change Pyongyang’s behavior without causing regime collapse—it cut off oil for two months in 2003, which brought the regime to the six-party negotiating table. However, Beijing chooses not to fully implement UN Security Council sanctions.

Beijing should realize that Pyongyang’s advancing nuclear arsenal also provides Kim with a handy deterrent and leverage against China regardless of being “allies” because of deeply-rooted, centuries-old animosity toward its neighbor. Further complicating Northeast Asian relations now are Beijing’s views of South Korea and Japan in the context of U.S.-China relations, not as bilateral issues.

China also cannot solve the North Korean nuclear problem because it cannot provide what Pyongyang desires most from Washington—security and political guarantees. However, Beijing can help, if willing, incentivize Pyongyang to choose the path of denuclearization in return for a range of political, security and economic benefits. The challenge for Washington is whether it will expend its leverage over Beijing on the North Korea issue when the two countries are intertwined in a host of larger contentious issues.

• Getting rid of Kim Jong-un or instigating regime change will solve the North Korea problem.

Ousting Kim Jong-un does not guarantee that North Korea’s next leader will abandon the North’s nuclear weapons, which have been promoted among the North Korean populous as integral to the country’s defense against bigger, powerful countries and as a source of national pride. A replacement leader has yet to be identified. Even if decapitation is successful, it runs the risk of uncontrolled and highly dangerous actions by North Korean military leaders in retaliation. Defectors have expressed the North Korean public’s pride in their country’s strength thanks to nuclear weapons.

Sanctions alone will not work, but they will if implemented effectively with diplomacy. Sanctions are aimed at bringing North Korea to the negotiating table. It mischaracterizes their purpose to claim that sanctions have not achieved denuclearization and to blame sanctions for provocations while discounting Pyongyang’s aggressive intentions and cheating record. Sanctions were effective in bringing Pyongyang to negotiations in 2006 when Kim Jong-il’s assets were frozen the previous year in Macao’s Banco Delta Asia for money laundering and other illicit activities.

Direct talks are not a reward, but rather, the basic means to gauging the full range of possibilities for any deal that are not reflected in each other’s public statements. A deal can only be struck if negotiations are allowed to function to their fullest potential. Talks about talks are often necessary ahead of formal negotiations, and this does not mean pressure tactics need to be lifted during the course of talks.

Washington and Pyongyang each need a signal from the other that provides the political space and justification to begin direct discussions. Upon receiving his military’s strike plans against Guam, Kim Jong-un reportedly said he would wait and watch for Washington’s next move before making a decision, according to the North’s state-run media KCNA on August 15. South Koreans would interpret such public remarks by Kim himself as Pyongyang backing down and providing an opening.

The more urgent communication channel needed during tense times is one on reducing the risk of miscalculation, misperception and avoiding war, which could naturally evolve into a discussion about the North’s nuclear and missile programs and Pyongyang’s security concerns. If nuclear weapons are Pyongyang’s insurance policy against a possible U.S. attack, then the regime would have no justification to hold on to them after its security concerns are resolved. Kim Jong-un is the only one who can make that call and his country must follow. This means, American policymakers can still set and test ambitious goals, and avert an August Crisis.

• Our options are either pressure or talks.

It would be a mistake to choose only one option or one narrow approach. An effective North Korea policy combines several options in various categories while sequencing and timing them with events on and around the Korean Peninsula. This is because the North Korea problem is a convergence of many complex factors: nuclear nonproliferation, security, political, regional, economic, cultural and historical issues.

Duyeon Kim is a visiting senior research fellow at the Korean Peninsula Future Forum in Seoul and specializes in nuclear nonproliferation, the two Koreas, and East Asian security and geopolitics. She was previously an associate in the Nuclear Policy and Asia programs at the Carnegie Endowment for International Peace.

Image: FILE PHOTO: Intercontinental ballistic missiles (ICBM) are driven past the stand with North Korean leader Kim Jong Un and other high ranking officials during a military parade marking the 105th birth anniversary of country's founding father Kim Il Sung, in Pyongyang April 15, 2017. The missiles themselves were shown for the first time inside a new kind of canister-based launcher on Saturday. The trucks upon which they are mounted are originally designed to move lumber. REUTERS/Damir Sagolj/File Photo