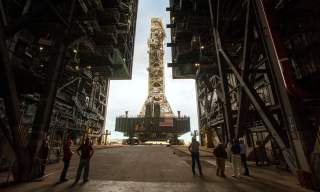 SATELLITES MAY be the least thrilling component of the U.S. force posture, but they are vital in providing key intelligence and upholding deterrence. As offensive technology advances and the final frontier becomes increasingly congested with thousands of satellites owned by dozens of countries and corporations, there is growing concern that our space-based assets have become sitting ducks, continuously traveling in the same, predictable orbits and equipped with few defenses.

Why are these systems at risk of being targeted? The conventional military applications that satellites provide cannot be overstated. Satellites produce critical geospatial imaging, near real-time intelligence on missile launches, and help guide troops and munitions via global positioning systems (GPS). According to Department of Defense statements, intelligence and guidance provided by Defense Support Program satellites proved essential to successes in Operation Desert Storm, the 1999 Kosovo air campaign and the 2003 Iraq invasion. A 2017 Center for Strategic & International Studies (CSIS) report entitled “Escalation and Deterrence in the Second Space Age” describes how U.S. utilization of precision—GPS and laser-guided—munitions has increased from 8 percent at the start of the first Gulf War to over 96 percent as of the Syrian Civil War in 2014. Some have argued that the United States has become over-reliant on the national security advantages provided by satellites, calling this growing dependence America’s “Achilles Heel” in modern warfare. Curbing access to these advantageous tactics early on in a conventional conflict would certainly level the playing field for an aggressor.

Some of these same systems would be integral before and during potential nuclear crises, because, by nature of their design, they are also able to provide early warning should an adversary launch an icbm. This intelligence would create a vital window for decisionmaking, missile defense operations and potential retaliation before one’s own targeted weapons might be destroyed. Other satellites enable communications between political and military officials regarding nuclear command and control should such a crisis occur. James Acton, co-director of the Nuclear Policy Program at the Carnegie Endowment for International Peace, has noted that because many of these satellite constellations have both conventional and nuclear applications, it may be difficult to characterize the intent of an attack and control escalation once one is targeted.

Part of the growing fear surrounding the vulnerability of our space assets comes from the fact that the key major powers in space—Russia, China and the United States—have been unable to fashion any meaningful agreements to limit the types of satellite-threatening weapons or constrain worrisome behavior in orbit—measures in which the Obama and Trump administrations have expressed interest—albeit to varying degrees. Should the international community attempt to pursue such agreements now or in the future, it will have to consider the three obstacles that follow, each of which confounds traditional approaches to norm-building and arms control.

THE FIRST obstacle is that an adversary could use a wide range of tactics to compromise a state’s satellite, some of which are non-kinetic and complicate the notion of what constitutes a “weapon” or an “attack.”

A substantial challenge to any hopes of anti-satellite (ASAT) arms control is the sheer variety of tactics that an aggressor could utilize to harm or disable an opponent’s space assets. For this reason, the United States has repeatedly refused to sign various versions of the Treaty on the Prevention of Placement of Weapons in Outer Space, the Threat or Use of Force against Outer Space Objects (PPWT), a long-winded name for a joint Russian-Chinese un proposal where signatories would refrain from (1) putting any sort of weapon in space, and (2) from threatening or using force against objects in space—all in the noble name of creating a safer commons and preventing anti-satellite warfare.

At first blush, this treaty sounds like an anodyne, collaborative way to temper growing ASAT fears. So why exactly does the United States refuse to sign? Though the proposed agreement purports to restrict co-orbital ASAT systems (satellites capable of offensive operations against other satellites), it does not prohibit the creation, testing and stockpiling of a breakout force of ground-based weapons that could be just as harmful to space assets.

In reality, there are a spectrum of tactics, both ground-based and space-based, that an aggressor could use to harm an adversary’s satellite. The two traditional, kinetic ASAT systems are (1) co-orbital and (2) ground-based direct-ascent systems. These ASAT tactics have heretofore remained unused offensively, but have been flight tested and, in some cases, even displayed in demonstrations where a testing nation’s own defunct satellite is targeted and destroyed.

China, the United States and, earlier this year, India have all conducted these kinetic tests which result in an unintended side-effect: the creation of significant fast-flying space debris. Traveling at over 17,500 mph, space debris has become extremely problematic, threatening all manned and unmanned spacecraft in orbit. Of particular concern are the smaller bits of debris that cannot be tracked, thereby reducing the warning time for spacecraft to maneuver out of the way—a process which can expend a great deal of fuel. According to nasa, “Even tiny paint flecks can damage a spacecraft when traveling at these velocities. In fact, a number of space shuttle windows have been replaced because of damage caused by material that was analyzed and shown to be paint flecks.” If even a small piece of debris collided and destroyed a spacecraft, it could then create a larger number of debris which could threaten a chain reaction known as the Kessler effect. Further kinetic ASAT testing and any kinetic ASAT warfare could exacerbate the growing space debris problem.

On the subtler end of the spectrum are tactics that include: jamming satellite signals on the uplink or downlink to cause temporary disruption, “dazzling” a satellite’s sensor with a laser, or launching cyberattacks that target ground control stations or “spoof” signal data. Attacks that only temporarily inhibit the function of a satellite may be viewed as less escalatory than a blatantly destructive kinetic attack, and therefore might be a more attractive option to aggressors. Russia has already successfully jammed GPS signals, affecting operations in Eastern Ukraine, Norway and possibly Syria, forcing the U.S. Department of Defense to introduce training measures to reduce dependence on satellite-guided navigation assistance. Russia and China are each developing and testing their own laser “dazzler” systems.

If the international community were to seek a meaningful arms control agreement or behavior-restricting treaty for space, it would need to consider what on the spectrum of offensive ASAT tactics constitutes an “attack” or “weapon,” which are the most likely to occur and which can be reasonably constrained. Kinetic direct-ascent and co-orbital attacks are certainly of great concern, but what about subtler attacks that achieve similar, albeit temporary, objectives? Many of these come with their own regulatory difficulties. Jamming, cyberattacks and lasers all present some degree of plausible deniability to the offender: jamming can sometimes be indistinguishable from noise caused by unintended interference, cyberattacks can be difficult to attribute to a specific actor and tracing a laser back to its source may prove to be more difficult than it sounds. Relatively inexpensive jamming tools are not difficult for states, or even non-state actors, to acquire.

Additionally, the United States must decide which, if any, of these offensive behaviors warrants a response, and what that response should look like. Though jamming or spoofing GPS signals in peacetime would likely not meet the threshold for kinetic retaliation, what would? A non-attributable Stuxnet-type cyberattack that inflicts lasting damage on one or multiple ground control stations? An “accidental” collision of two satellites? The 2018 U.S. Nuclear Posture Review includes retaliation after a “significant” non-nuclear attack on American or allied nuclear command, control and communications (NC3)—which includes sensors and satellites in space—as a legitimate scenario for the potential first use of nuclear weapons. Though this declaratory policy may be deliberately vague, it raises a critical question: what exactly would qualify as a “significant attack” on NC3 or warning and attack assessment capabilities? These, and other scenarios, are important to consider when discussing how we might prevent escalation in space and avoid a potentially catastrophic conflict.

THE SECOND challenge is our inability to characterize a given satellite as strictly peaceful. This complication makes traditional arms control or norm-building approaches unsuitable for space—with verification nearly impossible—and regulation highly difficult. This is another key reason for Washington’s refusal to sign the PPWT “no-weapons-in-space” treaty: it lacks a sound regime to verify that a satellite neither contains a weapon, nor will act as a weapon once in orbit.

Rendezvous and proximity operations (RPOs), somewhat complicated maneuvers that match the orbital speed of one satellite to approach and “hover” alongside a second, are an excellent example of the challenging dual utility satellites present. Though these operations are requisite in developing innocuous abilities to man, fuel and repair another of one’s own spacecraft, they also demonstrate the necessary precision to target and potentially destroy an adversary’s satellite. Not unlike flagrant jet intercepts that “buzz” U.S. aircraft, Russia has been heavily criticized for conducting these sometimes high-speed, close-approach operations without alerting the controllers of the “target” satellites beforehand. RPOs are not restricted or constrained by any international treaties, yet the destructive potential that accompanies each operation is a source of renewed worry for the “target satellite” operators. Recent advances in technology, such as the addition of a robotic arm to Chinese’s SJ-17 satellite, exacerbate these fears—the satellite could repair a loose screw in another of its own spacecraft, or just as easily disassemble or “nudge” an adversary’s satellite out of orbit.