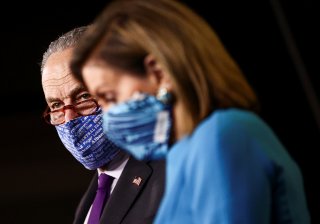 Top congressional Democrats punted their support for the $908 billion bipartisan stimulus package on Wednesday, signaling a huge concession with the intent to push White House negotiators and Senate Republicans to finally strike a deal after months of inconclusive talks and amid the economic turmoil wounding the nation.

House Speaker Nancy Pelosi (D-Calif.) and Senate Minority Leader Charles Schumer (D-N.Y.) released a joint statement, saying, “in the spirit of compromise we believe the bipartisan framework introduced by Senators yesterday should be used as the basis for immediate bipartisan, bicameral negotiations.”

Pelosi’s shocking acceptance of the bill reveals a willingness to negotiate, as she has insisted in crafting a multi-trillion-dollar package—efforts that have been forcefully rejected by the GOP for months.

Prior to Pelosi and Schumer’s announcement on Wednesday, the speaker and top White House aides haven’t reached a deal on further stimulus, despite the raging coronavirus pandemic that’s posted unseen cases and deaths each day, as well as the dwindling economy, with millions of Americans unemployed and small businesses closed. The House of Representatives passed two massive Democratic spending measures, but Senate Republicans stood by a package that had a price tag of $500 billion. In an attempt to compromise with Pelosi and House Democrats in recent months, Treasury Secretary Steven Mnuchin proposed a $1.7 trillion deal, but it was brutally tossed.

President Donald Trump said Thursday that he would sign a coronavirus relief package if Congress can reach an agreement after months of a partisan deadlock.

“I want it to happen, and I believe they're getting very close to a deal,” Trump said in the Oval Office.

President-elect Joe Biden has pressed Congress and the Trump administration to pass some form of economic relief and expressed his support for the bipartisan effort by saying it “wouldn’t be the answer, but it would be immediate help for a lot of things, quickly.”

“In politics, context isn’t everything, but it’s almost everything. The context in America has changed with all-time high death rates from Covid, and a terrifying fear, especially in the older generation. They vote,” Paul Bracken, professor of political science at Yale University, said in an interview via email. “In this context, the $908 b[illion] package is an opening signal of a willingness to do business. I don’t see how McConnell can appear to stonewall an even larger package.”

It also funnels $16 billion into coronavirus vaccine distribution; $82 billion for schools and education needs; $25 billion in rental assistance; $10 billion for the U.S. Postal Service; and tens of billions of aid for child care, transit authorities and other health care needs.

Another legislative provision provides temporary liability protections for businesses and firms on coronavirus-related lawsuits—a top priority for Senate Majority Leader Mitch McConnell (R-Ky.) and GOP lawmakers but widely opposed by Democrats. The measure does not, however, include another round of stimulus checks.

With federal relief from previous coronavirus-related legislation drying up like unemployment insurance, protections for renters and the student loan payment moratorium, economists stressed the urgency for Congress to fuel more funds into the economy.

“The pandemic is raising big questions about impact on economic productivity through Q4 and early Q1,” Scott B. MacDonald, chief economist at Smith’s Research & Gradings and contributor to the National Interest, said in an interview via email. “The Republicans do not want to be seen as the grinch who stole Christmas in the face of spiking pandemic numbers and cooling economic activity.”

Although the Democratic step-down is productive for relief talks, it’s unclear if McConnell would be willing to back the compromise plan, as he didn’t embrace it during his Senate floor speech on Thursday. Instead, he noted that a deal is “within reach,” while surfacing the GOP-led “targeted relief proposal” that focuses on pumping funds into sectors within the economy that are struggling the most like small businesses and the airline industry.

“We just know we need help, and the skinny bill doesn’t help. It leaves too much out,” Manchin said, referring to the Republican proposal.

But it’s also unclear how much Democrats would be willing to negotiate with the other side of the aisle, especially as Pelosi and Schumer envision more spending, while McConnell and Senate Republicans don’t want an expensive price tag. Pelosi and Schumer noted in their joint statement, “Of course, we and others will offer improvements, but the need to act is immediate and we believe that with good-faith negotiations we could come to an agreement.”

Experts, however, brewed hope for an eventual congressional compromise.

“I think we’re seeing a very interesting shift by Republicans away from Pres[ident] Trump,” Bracken said. “It’s only got to be small to signal that they’re independent from the old White House, and ready to act when the country is in trouble. The Democrats will push for more, and the Republicans will be slowly receptive.”

J. Russell Muirhead, professor of democracy and politics at Dartmouth College, said in an interview via email, “I think it will inspire confidence in American constitutional democracy if Biden and the Democrats on one side and McConnell and the Republicans on the other can negotiate in good faith and hammer out a compromise that everyone can live with, even if no one is perfectly happy with the result.”

But MacDonald regarded any upcoming stimulus “as a bridge to a Biden admin[istration] deal [in] early 2021.” The president-elect and his team have flagged that they’d pass an extensive measure after inauguration day, dubbing the bipartisan effort as “at best, just a start.”

“Making politics—instead of the other option, making war—does not require that we unify and agree about everything,” Muirhead said. “It requires us to compromise because, under conditions of freedom, we will never agree. I hope—and I’d venture to say that I figure many others hope—that our leaders can figure out how to make democratic politics work. Again.”