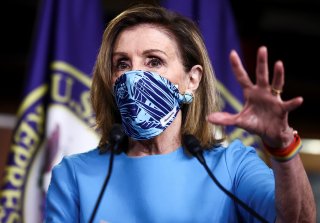 A bipartisan group of lawmakers unveiled a coronavirus stimulus package Tuesday, as failed talks between congressional leaders and top White House aides have put negotiations at a partisan deadlock over authorizing federal spending to aid the strained economy.

The $908 billion stimulus proposal is the most recent effort from lawmakers to reportedly draft a coronavirus-related spending measure since talks between Senate Majority Leader Mitch McConnell (R-Ky.) and House Speaker Nancy Pelosi (D-Calif.) hit a brick wall ahead of the presidential election, with the two remaining divided on key legislative provisions and on the overall price tag.

The bipartisan push includes more than a dozen members from the House and Senate such as Republican Sens. Mitt Romney (Utah), Rob Portman (Ohio) and Susan Collins (Maine), as well as Democratic Sens. Chris Coons (Del.), Joe Manchin (W.Va.), Mark Warner (Va.), Michael Bennet (Colo.) and Dick Durbin (Ill.), who have met virtually and in-person for weeks to try and compose a legislation that would provide federal aid to a boiling economy with millions of unemployed Americans and drowning small businesses.

“Our action to provide emergency relief is needed now more than ever before. The people need to know we are not going to leave until we get something accomplished,” Manchin said. “I’m committed to seeing this through.”

The proposal offers $300 weekly jobless benefits, a drop from the $600 per week provided in the Cares Act and advocated for by House Democrats, $160 billion for states and cities, a Democratic priority, and $288 billion for small business aid through the Paycheck Protection Program (PPP).

Another legislative provision provides temporary liability protections for businesses and firms on coronavirus-related lawsuits—a top priority for McConnell and GOP lawmakers but widely opposed by Democrats.

The spending bill that nearly doubles McConnell’s targeted price tag of $500 billion and splits the House Democratic multi-trillion-dollar bill in half—led by Pelosi and Senate Minority Leader Charles Schumer (D-N.Y.)—does not include another round of $1,200 stimulus checks to keep the cost of the package down.

Stan Veuger, economist and resident scholar in economic policy studies at the American Enterprise Institute (AEI), said in an interview via email that omitting stimulus checks was the “right move.”

“We are not necessarily looking to stimulate activity in the most affected industries right now; instead, we are trying to help households and firms survive what will hopefully be last months of tremendous difficulty. For that more targeted, more generous support makes much more sense than the expensive populism of checks for everyone,” he added.

It’s unclear if the bill will be passed, especially after months of inconclusive talks between Pelosi and McConnell, as Pelosi has fought for more spending for state and local governments, an extension of the $600 per week in jobless benefits and no liability protections, while McConnell wants to keep the package’s cost down by reducing spending towards unemployment insurance and state and local aid. But the effort still proved the frustration among lawmakers over the congressional stalemate in getting another round of federal relief passed.

“It is absolutely essential that we pass emergency relief,” Collins said.

“Being essentially a compromise, the U.S. $900 billion package being proposed is bound to run into opposition on both sides. There are bound to be many Republicans who are likely to be upset with the support to the states that is included in the package, while many Democrats will object to the relatively small size of unemployment benefits being offered as well as to the liability protections being offered to businesses,” Desmond Lachman, a contributor to the National Interest and a resident fellow at the American Enterprise Institute, said via email.

To move to the next step in passing the bill, it would need buy-in leadership from both sides of the aisle. Pelosi and Treasury Secretary Steven Mnuchin are slated to speak over the phone on Tuesday to discuss coronavirus relief for the first time in weeks.

The virus has ignited another infectious wave amid the holiday season, as the weather gets colder and more people congregate indoors to celebrate, making it easier to contract the disease. Hospitals and medical supplies are exhausted, and some cities have implemented stay-at-home orders or restrictive regulations to mitigate the spread.

With federal relief from previous coronavirus-related legislation drying up like unemployment insurance, protections for renters and the student loan payment moratorium, economists stressed the urgency for Congress to fuel more funds into the economy.

“The bipartisan Senate effort to break the stimulus package deadlock is to be welcomed given that the U.S. economy is slowing and we are now facing a very dark Covid-economic winter that could tip the economy into another leg down,” Lachman said. “Hopefully Democrats and Republicans can iron out their differences before the Christmas recess. If not we should brace ourselves for some rough economic sledding into the New Year.”