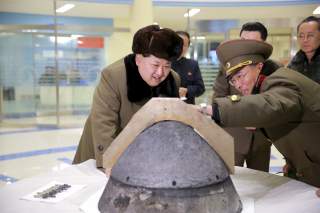 President Donald Trump has discovered that nations around the world will not readily submit to his will. His administration has increased sanctions on and made military threats against Cuba, Venezuela, Russia, Iran and North Korea. So far, none of them have surrendered to Washington. Only the Democratic People’s Republic has come to the negotiating table.

The president’s willingness to talk with North Korea’s Supreme Leader Kim Jong-un deserves praise, despite complaints from the warmongering Right and partisan Left. However, his demand for instant and complete denuclearization was never realistic.

Alas, negotiations in which the president placed so much hope have ground to a halt. Most recently, North Korean diplomats skipped the ASEAN summit, where Secretary of State Mike Pompeo had expected to meet with North Korean foreign minister Ri Yong-ho. Said Pompeo: “We stand ready to continue our diplomatic conversation with the North Koreans,” but, he added, “I regret that it looks like I’m not going to have an opportunity to do that while I’m here in Bangkok.”

Indeed, the bilateral relationship is deteriorating. The United States and the Republic of Korea are conducting military exercises, despite bitter attacks by Pyongyang. The DPRK is conducting short-range missile tests, embarrassing the Trump administration and unnerving both the ROK and Japan. The president continues to express his confidence in Kim’s commitment to denuclearize, but the former might find that position harder to defend in the face of Democratic Party attacks as the 2020 presidential campaign accelerates.

The North is forever unreasonable and obstructionist. That is unlikely to change. But in this case Pyongyang’s position is logical, reflecting the interests of the Kim family regime. After all, Kim is supposed to abandon his leverage in return for vague promises of positive benefits in the future. However, the United States routinely coerces governments on its enemies list, such as Serbia, Afghanistan, Iraq and Libya. Notably, none of those countries had a nuclear deterrent.

In the latter case, dictator Muammar el-Qaddafi yielded his nation’s missile and nuclear programs in return for promises of official Western favor. He originally was welcomed in European capitals, but when the Arab Spring hit Libya the United States and its European allies took advantage of his weakness to force his ouster. In truth, rather like the North, Washington cannot be trusted. Indeed, after viewing Qaddafi’s fate, Kim would be a fool to entrust his future to the United States. And whatever Kim is, he is no fool.

He also probably doesn’t want to rely on China’s, Japan’s and Russia’s goodwill. North Korea exists in a bad neighborhood. Possessing the ultimate deterrent guarantees international respect if not love. David Maxwell of the Foundation for the Defense of Democracies wrote of the need to convince “Kim that his nuclear arsenal is a strategic liability, not a vehicle for extortion,” but that seems well-nigh impossible.

Under even the best of circumstances, Pyongyang is likely to disarm, if at all, only over time and in carefully calculated steps. North Korean diplomats have emphasized to me that last year’s summit statement encompassed a sequential process. First, a better bilateral relationship. Second, an improved regional environment. Third, denuclearization. All of which makes sense: why should the DPRK give up its ultimate deterrent until it believes the United States has established a relationship and its neighbors have created an environment in which the use of military force against the North is unlikely? I doubt even then that Pyongyang would disarm, but it certainly won’t do so if those conditions are not met.

Moreover, even a genuine commitment to denuclearization would not, indeed cannot, be achieved quickly. What are the North’s nuclear assets? Where are they located? How can they be removed? What would satisfy Washington that the DPRK complied with denuclearization? This process likely would take years. The administration’s attempt to rush disarmament appears to be an attempt to sabotage the president’s agenda within. (Ironically, National Security Adviser John Bolton denounced reports that the administration was considering working toward a North Korean nuclear freeze as “a reprehensible attempt by someone to box in the president.”)

In fact, the administration might be considering proposals to seek small deals offering benefit for benefit. E.g., pursue the Hanoi summit’s proposed trade-off of closing Yongbyon in return for sanctions relief. Then desire for the perfect, instant full denuclearization, would not prevent achievement of the good, meaningful limitation of North Korea’s nuclear capabilities.

However, Washington should go further, at least in its internal discussions. It should maintain its overall public objective of CVID: complete verifiable irreversible denuclearization. But in practice the United States should systematically promote a series of more limited but nevertheless beneficial reforms. If completed, they would amount to CVID. But if only a few were adopted they still would provide significant independent benefits.

For instance, production of a nuclear inventory. Inspection and investigation to verify the inventory. Permanent end of nuclear and missile testing. Guarantees against proliferation. Caps on the size of North Korea’s nuclear arsenal. Elimination of Pyongyang’s capability to expand and improve its nuclear capabilities. International monitoring of the North’s activities.

Further, the president should clearly reject belief that the alternative to denuclearization is war. The threat of attack, if credible, might offer negotiating leverage, but also would raise tensions and make the North more likely to preempt military action it believed to be imminent. After all, given United States conventional superiority, the North must use or quickly lose its military capabilities and would be forced to respond almost instantly to any assault by Washington.

Moreover, America could live with a North Korean nuclear weapon. Former Secretary of State Rex Tillerson complained that the latter would “leave North Korea with significant capabilities that would represent a true threat, not just to the region, but to American forces, as well.” To the contrary, though unfortunate and unpleasant, a DPRK nuke would not really threaten America. There is no evidence that Kim or anyone else in Pyongyang’s ruling elite is suicidal. They want to enjoy their virgins in this world. Rather, the North is looking for a deterrent to U.S. military action. The only reason to target America is because Washington is there—with troops on the Korean peninsula and throughout Northeast Asia, backing a “mutual” defense treaty to defend the ROK.

Therefore, in practice a North Korean nuclear capability to attack America would not threaten U.S. security. Rather, it would undermine South Korean security since Washington could not credibly threaten to intervene in an inter-Korean war if the result might be the incineration of American cities. Nothing in Korea warrants Washington taking that kind of risk. The only logical response would be to disengage militarily, shifting responsibility for the South’s defense to where it belongs, Seoul.

American acceptance of nuclear proliferation would not be new. Nor would doing so collapse the nonproliferation framework, since countries appear to make decisions about nuclear weapons overwhelmingly in response to their own circumstances and security situations. Moreover, the United States long ago lost its nonproliferation virginity. It has supported or accommodated the United Kingdom, France, Israel, India, Pakistan and China gaining nuclear weapons. In the early 1960s Washington considered and rejected launching a preventive war against Beijing. The United States abandoned its attempts to force India and Pakistan to abandon their nuclear programs. Yet Islamabad, which proliferated technology to Libya and North Korea, may be the most dangerous nuclear power today. Washington simply recognized its limits and made the best of a bad situation.

The possibility, indeed likelihood, that the DPRK will remain a nuclear power makes improving relations with the Kim regime more urgent. The United States should pick up with the Singapore summit statement: end the dual travel ban on North Korean travel (Washington should want more visitors both ways, to spread ideas and increase knowledge), open liaison offices (it will be increasingly important to have regular communication channels) and make a peace declaration/sign a peace treaty (the war is over and should be recognized as such).

Moreover, Washington should suggest the ROK begin making plans for taking over its conventional defense: that means augmenting its personnel, taking over command and control responsibilities now handled by Washington, accepting a larger regional defense role, and forging better ties with like-minded neighbors—most importantly, Japan. Washington also should indicate that Seoul and its neighbors will need to take the lead on dealing with the North, which matters far more to them than to America. This would help prepare the peninsula for U.S. disengagement.

A gaggle of analysts, journalists and politicians are wringing their hands over the failure of North Korea to disarm. That was never a realistic prospect. Policy toward the DRPK has always been one of second-best options. Preparing for a world with North Korea as a nuclear power is a necessity for the future.

Doug Bandow is a senior fellow at the Cato Institute. He is a former special assistant to President Ronald Reagan, the author of Tripwire: Korea and U.S. Foreign Policy in a Changed World, and coauthor of The Korean Conundrum: America’s Troubled Relations with North and South Korea.