Afghanistan Is a Threat to Global Security Once Again 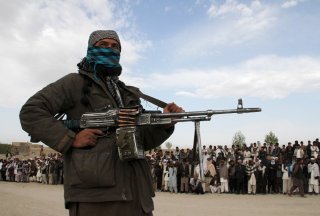 Twenty-one years ago, before the Taliban enabled Al Qaeda to launch the tragic 9/11 attacks from Afghan soil, Afghanistan was a no man’s land. Dozens of regional and transnational terrorist and organized crime networks roamed freely, primarily victimizing destitute Afghans and posing a major security risk to the United States, Afghanistan’s neighbors, and the world.

Under the Taliban’s pre-9/11 regime, gender apartheid prevailed, state institutions collapsed, brain drain peaked, jobs completely disappeared, and displacement had become a daily occurrence as civilians desperately tried to flee persecution and extrajudicial killings. Drugs, which drove organized crime, and financed terrorism and the Taliban’s tyranny—had become Afghanistan’s only export. Taliban supreme leader Mullah Omar once rationalized that this was “a gift from the Islamic Emirate to kill infidels everywhere in the world.”

This anarchic situation ended after the 9/11 terrorist attacks against the United States. The world overwhelmingly supported the U.S. military intervention to help the Afghan people free their country from terrorism, extremism, and drugs—all of which directly undermined international peace. Thanks to international assistance, the following two decades saw Afghanistan transformed from a no man’s land that threatened international security to a flourishing democracy where millions of girls went back to school, mortality rates dropped, life expectancy rose, the economy took off, state institutions gained the capacity to deliver public services, and Afghan security forces took over from international troops to defend Afghanistan against external threats, including the Taliban and affiliated terrorist groups.

Despite these growing achievements, however, the Taliban reconstituted and found shelter in Pakistan to destabilize Afghanistan and reverse its gains. To end this interference, the Islamic Republic government repeatedly reached out to the Taliban and their state sponsor to engage in peace negotiations to end the conflict. But observing the wavering commitment of U.S. administrations to institutionalizing democracy and achieving sustainable peace in Afghanistan, Pakistan continued supporting the Taliban’s destructive campaign of terror.

The Taliban were also able to bypass Afghanistan’s elected leadership by talking directly to the Trump and Biden administrations to negotiate a troop withdrawal deal known as the Doha Agreement. This deal hardly aimed to facilitate an inclusive peace process that would produce a sustainable political settlement to end the war and allow for the honorable withdrawal of U.S. and NATO forces. Indeed, disregarding any concrete peace efforts that included Afghanistan’s elected government emboldened the Taliban to achieve a total victory.

This soon materialized when the Biden administration abruptly decided to withdraw U.S. forces from Afghanistan before the terms of the Doha Agreement were fully implemented. This betrayed Afghanistan’s developing democracy and demoralized its security forces who, despite being dependent on NATO’s key military enablers, fought hard to defend their country against overwhelming foreign aggression. But they soon disintegrated as the Taliban, armed to the teeth, guided by foreign military and intelligence advisers, and supported by Al Qaeda fighters, captured Kabul and toppled the Islamic Republic on August 15, 2021, in a gross violation of the United Nations (UN) Charter.

Since then, the hard-won gains of the Afghan people have been consistently reversed. The recent anniversary of the fall of Afghanistan to the Taliban was widely covered by international media as a tragic event that marked the country’s fast return to its pre-9/11 status. The country has suffered from large-scale brain drain as thousands of educated Afghans have fled for well-founded fears of persecution under the Taliban’s oppressive rule.

As an UN-sanctioned militant group, the world has refused to recognize the Taliban government and frozen Afghanistan’s foreign exchange reserves. Without human and financial resources, Afghanistan’s state institutions have crumbled and are unable to provide its citizens with basic services such as healthcare, education, clean water, and sanitation, as well as natural disaster prevention and management.

At the same time, the Taliban have banned women from working and girls from receiving an education, effectively depriving Afghan society and its economy of female participation. This has had a direct adverse impact on Afghanistan’s peaceful and sustainable development. Tragically, more Afghans have died due to direct and indirect acts of violence by the Taliban over the past year than in all of the preceding years under the Islamic Republic.

For example, since August 2021, Afghanistan’s maternal, child, and infant mortality rates are back to their grim pre-2001 status. This is a direct result of the Taliban’s systematic destruction and looting of many public service-delivery institutions at the provincial, district, and village levels in the months prior to the takeover of Kabul, as well as their dismantling of key state structures, such as the Ministry of Women’s Affairs and the Independent Human Rights Commission, once in power.

Moreover, in a complete violation of multiple UN Security Council resolutions and their commitments under the Doha Agreement, the Taliban have harbored major regional and global terrorist groups, including Al Qaeda, the principal perpetrator of the 9/11 attacks. Al Qaeda leader Ayman al-Zawahiri moved to Kabul shortly after the Taliban takeover and was clandestinely hosted by the Taliban interior minister, Sirajuddin Haqqani, before he was killed by a U.S. drone strike.

Afghanistan under the Taliban now produces the world’s largest share of illicit drugs, including opium, heroin, and methamphetamine. While drugs wreck the lives of young addicts throughout the world, revenue from the drugs is used to finance the Taliban’s repressive regime which persecutes, disappears, and kills Afghan citizens extrajudicially every day. Their targets are often former members of the Afghan national security forces, as well as ethnic Hazaras, Tajiks, Uzbeks, Turkmans, and nationalist and pro-democracy Pashtuns.

These growing and intertwined challenges of terrorism, drugs, economic collapse, and humanitarian crisis pose major threats to the security of the U.S. homeland, regional stability, and international peace. Another 9/11 tragedy emanating from Afghanistan is a rapidly nearing reality. But this can be prevented if responsible members of the UN, especially the United States and its NATO allies, act to help revive Afghanistan’s peace process and enable it to produce a sustainable political settlement.

Ultimately, a peace agreement among all Afghans, including the Taliban, should form an inclusive government, consistent with the Afghan Constitution, Afghans’ hard-earned gains over the past twenty years, and Afghanistan’s international obligations. To achieve this goal, a multinational force, including troops from China and India, should be deployed as a UN peacekeeping mission to help enforce the terms of the agreement until an Afghan inclusive government can maintain peace on its own.

This is an outcome the international community should work to achieve together. Doing so will relieve them of their shared moral obligation to end Afghans’ suffering following forty-three years of war and violence. At the same time, it will prevent the same circumstances that led to the unforgettable tragedy of 9/11 from materializing. Considering the failed efforts by the United States and others to engage with the Taliban, now is the time to summon up the political will necessary to secure sustainable peace in Afghanistan by taking concrete measures under the UN Charter.

M. Ashraf Haidari is the Ambassador of Afghanistan to Sri Lanka, and concurrently served as the Director-General of the South Asia Cooperative Environment Program (SACEP) until August 2021. He was Afghanistan’s Deputy Ambassador to the U.S. and India, and formerly served as the country’s Deputy Assistant National Security Adviser. He tweets @MAshrafHaidari.