The U.S. War in Afghanistan Still Isn’t Over 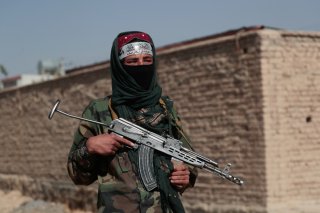 One year ago, I wrote in these pages that the war in Afghanistan was not over. As many as 5,000 Afghan soldiers who the United States trained were still fighting in Panjshir Province, the last redoubt against the Taliban takeover of the country in August 2021, and I said that the United States as a nation had an obligation to support them. The current administration chose to leave Afghanistan instead, effectively abandoning our allies. The original Taliban mindset is fully back in power; girls’ secondary schools are closed, women may not travel without a male overseer, the free press has been shut down, and extrajudicial killings are on the rise. The Biden administration has been clear that it wants no role in a continuing civil war in Afghanistan.

Last month, a spokesperson at the same State Department which crafted the disastrous U.S. withdrawal plan from Afghanistan told the Foreign Desk in an email response to a reporter’s question that the United States does “not support organized violent opposition to the Taliban, and we would discourage other powers from doing so as well.”

A more wrong-headed policy is hard to conceive. After telling the Afghan people for twenty years that we would stand by them, in August 2021, the United States cut and ran, often literally in the middle of the night. Like so many millions of Kurds, South Vietnamese, Hmong in Laos, Kachin and Shan in Burma, Tibetan resistance fighters, Cubans, Hungarians, and others around the world who believed that America could be trusted and cast their lot in with the United States, the Afghans who chose to fight the Taliban have been abandoned to their fate. The underlying message to the people of the world from this could not be more clear: America cannot be trusted as an ally.

The United States does not have to continue this course of embarrassing poltroonery in foreign policy. The armed resistance I wrote about a year ago is still fighting in Afghanistan and is active right now. Fighters of the National Resistance Front (NRF) are shooting at the Taliban in Panjshir and Baghlan provinces as you read this article. NRF forces shot down a Taliban helicopter in Panjshir in June. The newly-formed Afghanistan Freedom Front (AFF) and another group backed by former Afghan politician Atta Mohammad Noor are also carrying out hit-and-run attacks in the north. There have been reliable reports of clashes in Kapisa Province as well, where Hazara resistance fighters have repelled multiple Taliban counterattacks and continue to hold the Balkhab district. There is some evidence these groups are starting to coalesce in the form of a High Council of National Resistance. The guerillas are not yet well-organized, and they are not well-equipped, but they hate the Taliban and they are fighting.

Like the French Resistance in the dark days before the Allied invasion of Europe on D-Day, the NRF, AFF, and other freedom fighters in Afghanistan face long odds and terrible risks. To be fair, given the policy choices already made, there is not a lot the United States can do at this stage to help with either the odds or the risks. The United States could, however, provide money and recognition, and perhaps send the most needed support, such as encrypted communication equipment and medical supplies, by long-range cargo drones like the CQ-10 Snowgoose and the Silent Arrow. Instead of appeasing the Taliban, the United States could and should show the kind of international leadership it is showing in Ukraine by adopting a policy of standing by its former allies and forcing the Taliban to share power.

At the moment, the same architects of the spectacular diplomatic failure in Afghanistan are still working in the State Department’s Bureau of South and Central Asian Affairs and the office of the Special Representative to Afghanistan (SRA). SRA Tom West, for example, has made no secret of the fact that he wants to ease sanctions on the Taliban and return frozen funds to relieve the latest humanitarian crisis in Afghanistan, despite the Taliban breaking every promise they have ever made on reforms such as allowing girls to attend secondary school and permitting a free press. Giving the Taliban what they demand and getting nothing in return in the hope of gaining future concessions is not a strategy that has worked well over the past twenty years. Members of Congress have already rightly called this a policy of appeasement. The United States needs to show the world that even in the darkest hour after defeat, it does not quit on its friends or end its support for democracy.

If the moral principle of keeping American promises to the people of the world who fight for democracy is not sufficient, there is also naked self-interest. While there is no wiser, more tolerant “Taliban 2.0” that differs in any meaningful way from the original Taliban (which also treated women as livestock and executed hundreds of people in the Kabul soccer stadium in public spectacles), Al Qaeda is back in strength. As the drone strike which killed Ayman al-Zawahiri in a house owned by the wanted terrorist and Taliban interior minister Sirajuddin Haqqani in Kabul on July 31 made abundantly clear, Al Qaeda is now welcome in Afghanistan. It was already present in more than half of Afghanistan’s thirty-four provinces a year ago. Now, in many cases, Al Qaeda is using former U.S. bases as training camps, including Forward Operating Base Salerno in Khost Province where I spent some time in 2005.

Killing a senior terrorist leader is one thing but eliminating hundreds of Al Qaeda fighters at dozens of bases across the country is another. Furthermore, Al Qaeda is not the only terrorist group in Afghanistan. ISIS-Khorasan is active in Nangarhar Province and much of the north of the country, and terrorist cells of the Islamic Movement of Uzbekistan (IMU), Tehrik-i-Taliban, Jaish-i-Mohammed, Turkistan Islamic Party, and Lashkar-i-Taiba are now active in Afghanistan as well, according to a recent United Nations Security Council report. They are already attacking Pakistani security forces from Afghan territory. Not to mention the Haqqani Network, the international terrorist group that now controls much of the Taliban itself. Afghanistan is rapidly becoming the grand bazaar of international terrorism.

No one in Washington appears to be taking George Santayana’s dictum about forgetting the past and repeating it seriously. But the United States has been down the road of walking away from chaos in Afghanistan before. Following the Soviet withdrawal from Afghanistan in 1989, the United States abandoned Afghanistan to its fate for the first time. The result was the first rise of the Taliban and the takeover of the government in 1996. This was followed immediately by the establishment of Al Qaeda cells and the training bases across southern Afghanistan from which the terrorist attacks of September 11, 2001, were planned and launched by Osama bin Laden, killing nearly 3,000 Americans.

Incredibly, just twenty years later, the same scenario is playing out again. As Yogi Berra once said, it’s déjà vu all over again. Al Qaeda is clearly back in Afghanistan in force, and the Taliban does not have the slightest intention of evicting them. In fact, the UN reported that the Taliban was in regular communication with Al Qaeda during the Doha talks. It is all part of the sordid story of the Trump administration’s murky withdrawal deal and its secret annexes. In short, another terrorist attack against the United States or its interests around the globe by Al Qaeda or another terrorist group based in Afghanistan is a matter of when, not if.

American political leaders and think tank pundits alike choose to believe that somehow, despite decades of abandoning our friends and allies, the American brand of democracy still shines brightly like a beacon on a hill. But the idea that there is no credibility gap between U.S. words and deeds is self-delusion. Even Gen. Mark Milley conceded in response to a question from Sen. Roger Wicker (R-MS) during Senate hearings last year after the collapse of Afghanistan that American credibility had been damaged. The people of the world have heard the words but seen the deeds in South Vietnam, Iraq, and Afghanistan. The Taliban have shown that they will not change or compromise except under duress. In Ukraine, the United States is clearly following a policy of “sanctions, support, and arms.” The United States should act with the same resolve and consistency in Afghanistan, and continue the fight against the Taliban dictatorship with, in Carl von Clausewitz’s well-known phrase, “the addition of other means.”