Afghanistan: Will Biden Cave to the Forever War Party? 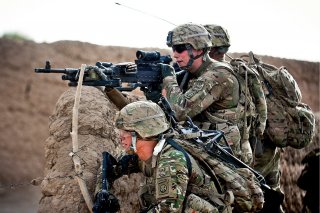 As is customary when a new administration takes the reins in Washington, policies of the previous administration are now under review, among them the Afghan Peace Talks. All such reviews must examine whether a policy makes sense for the U.S. national interest; whether it is in accord with the values of the party just elected; if no, what better alternatives exist; and if yes, whether the current implementation approach is solid.

As the future of the Afghan peace talks hangs in the balance, many experts and would-be experts from think tanks, media, and academia are seeking to influence the decision. However, their recommendations reveal two major and astonishing blind spots. First, they seem to be dismissing the lessons of the last twenty years. And second, they listen to and interact with only one of the sides in this conflict, the Afghan government side.

In accord with our agreement on the cessation of conflict, reached with the Taliban in early 2020, we are on a path to bring home almost all of our troops by May 1. But many “experts” are now suggesting that we should void that agreement to instead maintain or even increase our military presence. Do they know what they are saying? If we don’t honor our agreement with the Taliban, there is only one outcome: the war resumes and, since they will somewhat justifiably feel tricked, it is likely to intensify. How is that a good idea? Where have these people been for the past twenty years? It can hardly be said that we haven’t tried a military solution, and in every possible variant. We had not one, but two military surges. We disarmed the local militias. That didn’t help, so we rebuilt and re-armed them. We focused on areas where things were going comparatively better, on the theory that success could spread out from there. When that failed, we focused instead on the most difficult areas, on the theory that if we could handle those the rest would follow. We studied the lessons of other counterinsurgencies. We sent out teams of soldiers who had medical or farming skills, to combine community engagement with military presence. Under General David Petraeus, we dispatched the so-called human terrain experts, until some of them were tortured and killed.

By 2018, we had spent $68 billion training and building an Afghan military. Whereas the Taliban, despite no billions at all, have no problem with recruitment and motivation, the Afghan army continues to struggle with problems of retention and loyalty. Their soldiers desert in significant numbers, or they don’t exist at all but collect pay checks (the so-called “ghost soldier” problem) or they turn on their American partners and shoot them in the back (known as “green on blue” attacks). There is no realistic scenario in which “just a little while longer” is a promising strategy. There were several years when we maintained a troop level of 100,000 soldiers. Even with that, the Taliban were able not only to stand their ground but to extend their hold on their country, until today they control about 50 percent of the terrain. If 100,000 American soldiers couldn’t win this war, then 3,000 or 4,000 certainly won’t. There is no military solution here, and more years of bloodshed and war serve no one. To recommend otherwise, as journalists and desk warriors now are doing, is worse than cynical; it proposes to sacrifice American lives to no purpose.

This does not mean that the United States is indifferent to the circumstances of the outcome. We and our European allies are not prepared to sacrifice values that we consider universal, among them human rights, women’s rights, minority rights, and the basics of democracy. For that reason, our agreement with the Taliban was only the first step, with the second being a direct negotiation between the Afghan parties to the conflict, with each other, to agree on how to end the fighting and on what kind of society to put in place thereafter. The Peace Talks detractors among the experts and the journalists get their information solely from the Peace Talk detractors in Kabul, which hardly qualifies as due diligence. Can the two sides reach an acceptable outcome? Has the Taliban changed from their harsh initial rule? Have they truly forsworn the alliance with terrorist extremists, the unholy alliance that led to 9/11? In seeking to determine this, they are talking only to one of the two sides. And that’s irresponsible.

Detractors of the peace process say there is no point in talking to or listening to the Taliban, because you can’t believe them anyway. But the fact is that in diplomacy, you can never believe anyone, ally or adversary, because inevitably, they are guided by their own national, group, and often personal self-interest. It’s true that we can’t just believe what the Taliban say—but neither can we just believe what the Afghan government says. And we don’t have to, as any self-respecting analyst or diplomat should know. There are well-developed ways to measure statements against behavior and to read between the lines, not to mention the information derived from intelligence sources.

This is a well-established branch of analysis and I am baffled by the negligence of my colleagues who are failing to engage in the most basic intelligence task of all: reading the adversary. The Taliban claim they have changed. They say they are patriots and nationalists who want the foreign occupation to end but have no interest in attacking Americans or Westerners and regret having allowed themselves to be pulled into Al Qaeda’s projects. They say they understand that Afghanistan has changed during the past twenty years, and that they have changed as well, and are prepared to be more open to the world. Is that just self-serving propaganda intended to fool us? Maybe, but patterns are important, and that has not been their mode of operating in the past. Generally, they have been blunt to the point of provocation. A charm offensive isn’t really in their DNA.

Recently, the Taliban issued an Open Letter to the American People. I could not find anyone in the relevant organizations or the media who had bothered to read, let alone parse it. Yet it touches on the exact issues of main concern: the level of violence, the rights of women, the protection of minorities. Just hollow words? Maybe—but even if that were the case, it would not reduce its value to a trained analyst. In counterterrorism, my profession for over a decade when I was program director in the National Security Research Division at the RAND Corporation, a basic tool is the analysis, interpretation, and weighing of messages. What are the radicals saying, to whom, when, on what platform, with what likely intended effect? How does it compare to what they say to other audiences, to their own followers, or to what they said in the past? Much can be gleaned from this, and there is a reason why think tanks and intelligence agencies maintain entire staffs to read and interpret the speeches, intercepted communications, sermons, and other utterances of influential radicals. So, let’s take an experimental little stab at text analysis.

In my post-counterterrorism life, I am now the director of a cultural heritage organization. We have been nervous about the prospect of a Taliban return to power, given their previous destruction of one of the world’s most precious and iconic treasures, the Bamiyan Buddhas. We, therefore, sent a letter to both sides of the peace negotiations—the Afghan government and the Taliban—asking them to commit to responsible stewardship of their country’s historic treasures and requesting that this topic be added to the agenda for the peace talks. The Afghan government soon agreed. To my surprise, shortly thereafter, so did the Taliban. In fact, they did more than that. They also issued a directive to their commanders in the field, ordering them to take measures for the protection of historic sites in their respective areas, and instructing them to forbid looting, because these are “treasures that belong to the Afghan people.” As a professional weigher and parser of radical language and messaging, I submit that the Taliban’s statement on cultural heritage is especially telling just because this is so marginal a topic. I and my colleagues love and care about this, but let’s be realistic, this is a niche issue. The Taliban have nothing to gain from this statement, and therefore, this is likely to be their actual view. Underscoring this, we also found some local Afghan radio interviews in which Taliban representatives regretted their part in Al Qaeda’s destruction of the Bamiyan Buddhas. Further, in another interesting development completely ignored by Western analysts and journalists, their leader issued a directive to the leadership telling them to refrain from polygamous marriages unless the new wife was a destitute widow taken in as an act of charity. The explanation was that while allowed in Islam, additional wives represented an inappropriate luxury and indulgence and made the Taliban look bad to outsiders.