Against China: Is the Philippines' 'Moralpolitik' the Right Move? 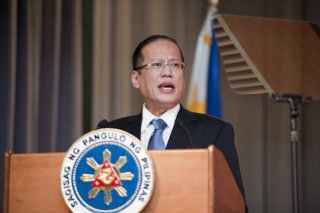 For years, the Philippines has been hailed as the courageous David that took the Chinese Goliath to court. The considerably weaker Southeast Asian country has sought to leverage prevailing international law, specifically the United Nations Convention on the Law of the Sea (UNCLOS), to challenge China’s dubitable doctrine of “historical rights” and notorious nine-dash-line claims in adjacent waters. As far as its South China Sea policy is concerned, the Philippines’ trademark approach is “lawfare” (legal warfare). None of the other claimant states, from Vietnam to Malaysia and Brunei, have dared to adopt a similar measure against mighty China, though Vietnam has been quietly making some preparations.

Lacking full-fledged sovereignty, Taiwan—considered by Beijing to be a renegade province—is in no position to launch credible lawfare, even though it occupies the most-coveted naturally-formed feature in the area, the Itu Aba (Taiping to locals), and controls the Pratas chain of islets close to the Northeast Asian theater. No wonder, then, Taipei is more interested, and feverishly advocating for, joint development and exploitation of resources in the contested areas. (But things could change if the pro-independence opposition Democratic Progressive Party (DPP) wins in the upcoming elections, especially in an era of growing anti-Mainland sentiment in the country.)

The Philippines’ lawfare strategy, however, falls under the rubric of what I call the “Moralpolitik” of the Aquino administration, which came into power in 2010 on the heels of a moral crusade against a rotten state apparatus. Over the years, not only did President Benigno Aquino seek to hold his predecessor (Gloria Macapagal-Arroyo) to account, but he gradually also upended years of increasingly cordial and quasi-subservient relations with Beijing that reached its zenith in the mid-2000s. While the Philippines’ legal-moralistic approach deserves global applause, it has gradually come at the expense of the Southeast Asian country’s strategic interests on the ground.

Intent on preserving “moral high ground” amid a protracted legal dispute with China, the Philippines has shunned any significant refurbishment of its dilapidated facilities in the Spratly chain of islands, just when all other claimant countries have been fortifying their positions amid China’s massive reclamation activities, which are giving birth to the skeleton of an Air Defense Identification Zone in the South China Sea.

In a recent exchange with Philippine foreign secretary Albert Del Rosario, he emphasized the nature of the country’s principled, independent foreign policy. When I asked him about reclamation activities of other claimant countries, particularly China and (allegedly) even Vietnam in recent months, he told me that it’s very important for the Philippines “to go to the court with clean hands.” I raised the point on reclamation activities in light of the Aquino administration’s decision to once again postpone the refurbishment of its creaking facilities and airstrip on Thitu Island (Pag-asa to Filipinos), just when other claimant states, including Taiwan, have been upgrading their facilities in the Spratly chain of islands.

He was mindful to reiterate that, under the Aquino administration, it is solely the manner—rather than the content—of the country’s foreign policy that has changed. For years, Beijing—along with government critics in the Philippines—has argued that the root of the awry state of Philippine-Chinese relations lies in Aquino’s supposed strategic debacles and confrontational language. Less-charitable Chinese commentators, who see the Philippines as nothing but an American proxy, forward conspiracy theories, whereby the Aquino administration has supposedly upped the ante with Beijing at Washington’s behest. China also spares no effort to dubiously cite the United States’ pivot to Asia—a policy that was actually announced after China stepped up its claims against smaller claimant states in the South China Sea—as a supposed justification for its aggressive behavior in near waters and well into the high seas.

Some sensationalist Filipino journalists have gone so far as claiming, quite astonishingly, that Aquino’s policies supposedly triggered China’s massive reclamation activities across the South China Sea. But among sober circles and across much of the world, it is well known that China is disproportionately responsible for the uptick in territorial tensions across the whole Western Pacific.

In The Rise of China vs. the Logic of Strategy, Edward Luttwak correctly points out that much of China’s recent maritime assertiveness has to do with Beijing’s premature sense of triumphalism in the aftermath of the 2008 Great Recession, which severely undermined the industrial-financial underpinnings of American power. Just like many other smaller states, the Philippines, which was at the receiving end of China’s maritime aggression over the Scarborough Shoal in mid-2012, has been only responding to the belligerence of a more powerful neighbor. In short, the Aquino administration has been simply reacting to China’s actions, rather than actively shaping the texture of bilateral relations with Beijing. Great powers have the agency to shape the dynamics of the international system; this is rarely the case with weaker nations.

Yet, there is something unique with Aquino’s approach. With respect to China, there is tremendous reluctance vis-à-vis high-level bilateral dialogue and robust trade and investment relations. There is also a tremendous (over)emphasis on an inherently risky legal approach and maintaining “moral high ground” at the expense of tangibly defending the Philippines’ position on the ground (see my comprehensive analysis of the Philippines’ arbitration procedures at The Hague).

To begin with, the Philippines seems to be the only country in East Asia—if not the whole Asia-Pacific theater—that has no functional, institutionalized high-level dialogue with China. Chinese president Xi Jinping, who has toured the world capitals over, has yet to visit Manila and hold a formal dialogue with his Filipino counterpart. The Aquino administration has also repeatedly turned down offers of negotiations and bilateral dialogue with China, while postponing formal membership in the China-led Asian Infrastructure Investment Bank (AIIB).

Interestingly, China has made it clear that any bilateral dialogue will come with no preconditions attached, specifically with respect to the two countries’ legal spat at The Hague. To put it bluntly, Beijing isn’t asking Manila to drop its case at Arbitral Tribunal. (Of course, China would love to see the case vanish from the pages of history.) As far as the AIIB is concerned, China will wield considerable influence, but given the participation of a wide range of wealthy and powerful European and Asian countries, it is unlikely that Beijing will have anything close to an absolute veto on the actual operations of the new financial institution.

The Aquino administration, however, is adamant that bilateral dialogue with China is practically worthless, while openly expressing doubts vis-à-vis the independence of and motivations behind the establishment of the AIIB. Moreover, the Philippines is precariously neglecting the necessity to maintain and enhance its facilities in the South China Sea in order to survive the ongoing scramble in the area, as other claimant states frantically fortify their positions.

Ironically, Manila, under the Marcos regime (1966-1986), was actually among the first countries that built an airstrip in the area, acknowledging the necessity of maintaining a strong presence on the ground. But now it is among the least-developed and most under-maintained facilities in the area.

For instance, it’s ragtag outpost (Sierra Madre vessel) on the Second Thomas Shoal, which has been at the receiving end of Chinese Coast Guard forces’ intimidation and siege tactics since 2013, is a poignant reminder of the Philippines’ decades-long strategic complacency, which is costing it dearly. For the past sixteen years, the Southeast Asian country has precariously hosted—on a rotational basis—few, marooned Filipino troops on a rusty, grounded vessel in order to guard its claim over the contested shoal. (The country had no outposts close to the Scarborough Shoal, which it lost to China in 2012. Same can be said about the Mischief Reef, which it lost in 1994.) Only recently did the Philippines decide to undertake desperately-needed maintenance operations to reinforce the hull and deck of the dilapidated World War II relic.

As former Philippine national security adviser Roilo Golez told me, the problem is that since Cold War years, Filipino leaders continuously “ignored the strategic value of a string of rocks and reefs and shoals that are convertible into potent military stations to control the vast sea around,” so they never bothered to invest in their strategic outposts and facilities in the area. Astonishingly, the Aquino administration’s approach hasn’t diverged from this self-defeating pattern, thanks to its obsession with maintaining a “moral high ground” and “rule-based” approach. Actually, international law permits maintenance activities, so long as they don’t permanently alter the nature of disputed features, as China has been doing.

With Aquino expected to step down in less than a year, there is a feverish discussion on whether the departure of the incumbent would usher in a new era in Philippine-China bilateral relations. Not long ago, Malcolm Cook, a Southeast Asia scholar, went so far as claiming that the “2016 Philippines presidential election looks like it could lead to a sharp change” in Philippines’ approach to China. There are, however, at least three reasons to doubt a major shift in Manila’s post-Aquino policy.