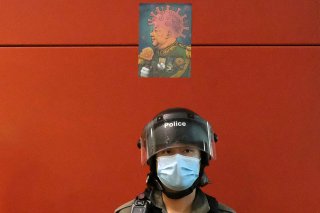 The coronavirus pandemic appears to have crystallized a new conventional wisdom in the United States about China: Engagement with Beijing over the past forty years was a fool’s errand because it was based on false assumptions that it would liberalize and democratize China. The Chinese Communist Party’s internal and external response to coronavirus has laid bare, and thus eliminated any doubts about, the regime’s malignancy at home and mendacity abroad. In addition to holding Beijing accountable for the global destruction wrought by the virus, Washington needs to accelerate the decoupling of the United States from China in order to protect Americans from China’s coercive economic leverage, insidious political influence, the pursuit of global hegemony—and future Chinese viruses. In the meantime, the Chinese government needs to come clean with a full explanation of where and how the virus, also known as COVID-19, originated.

There is reason and even some truth in all of this. But compare it to a commentary last week in the Global Times, an English-language tabloid newspaper published by the Chinese Communist Party: “The Trump administration owes the world an explanation regarding its response to the COVID-19 pandemic and should be held responsible for many of its missteps,” which included “ignoring early warnings of the disease, spreading lies about the origin of the virus and misleading domestic and international audiences while politicizing an issue that should be handled by scientists.” The commentary states that “Washington is widely believed to have failed its own people and the world” because it “failed to keep the situation under control, hurt international cooperation and misled the public, dragging the world into a longer-than-expected war against the pandemic.” Ironically, this is a relatively accurate description of both Washington’s and (no doubt unintentionally) Beijing’s own response to the coronavirus.

The symmetry here is striking, and reminds one of eighteenth-century Scottish poet Robert Burns’ line “Oh would some power the gift give us, to see ourselves as others see us.” The coronavirus is not the only virus afflicting U.S.-China relations. Another is the infectious blame game and escalating rhetoric as the two sides race to the bottom in denigrating each other’s handling of the crisis and shifting attention from their own respective missteps. This particular contagion is being driven by domestic politics on both sides, as Xi Jinping tries to deflect criticism of his own botched early response to the outbreak, and Donald Trump calculates that blaming China for the impact of the coronavirus in the United States will help get him re-elected in November. What’s missing on both sides is any recognition of the mistakes that are being made in the way Beijing and Washington are perceiving each other’s management of both the pandemic and the bilateral relationship. Such recognition is being blurred by ideological baggage, mutual distrust, misattribution of motives, and each side’s sense of vulnerability and uncertainty amidst the global crisis.

This is not to suggest that there is moral or any other kind of equivalence between the United States and China, or in their handling of the coronavirus. Beijing’s authoritarian/Leninist system responded to the outbreak in fundamentally different ways than has the U.S. democratic/federal system, some of them obviously counterproductive to containing the spread of the virus early on. And the secrecy, lack of transparency, and dubious reliability of official information inherent in the Chinese Communist system have continued to hamper international understanding of the coronavirus and progress against it. At the same time, it must be acknowledged that the inherent capabilities of China’s authoritarian system subsequently scored some successes against the spread of the virus, while some aspects of the United States’ open democratic system and present political leadership have delayed, complicated, or hindered success against the virus in the United States.

But there has been misinformation and disinformation on both sides. The Chinese Global Times commentary speculated about the possibility of a “US government cover-up” of an earlier coronavirus outbreak in the United States, based on possible cases here as early as September 2019 and the reported shutdown of a U.S. military biological lab in Frederick, Maryland in July 2019. And a senior Chinese diplomat infamously alleged in March 2020 that the coronavirus might have been introduced into Wuhan, China, by some U.S. Army personnel who were there for the World Military Games in October 2019. On the U.S. side, much of the reporting on Wuhan’s and Beijing’s early mishandling of the virus outbreak has readily characterized it as a “cover-up” without acknowledging the extent to which China’s delay in admitting human-to-human transmission of the coronavirus was due to uncertainty, lack of consensus, incompetence, and excessive caution among local officials rather than a central government directive to conceal known facts. Moreover, reports that local officials were ordered to destroy samples of the virus in early January overlooked the fact that the order apparently was aimed at safely preserving samples for study; local labs were only ordered to destroy samples they could not safely transport to a secure facility.

More prominently, Trump and Secretary of State Mike Pompeo—presumably to promote Trump’s electoral strategy of blaming Beijing for the virus, and to deflect attention from Washington’s failure to contain its spread—have repeatedly asserted that they have seen intelligence information that strongly supports the theory that the coronavirus leaked accidentally from a virology lab in Wuhan. However, the U.S. intelligence community itself issued an unusual statement affirming that this was only one plausible explanation that was being examined, without addressing whether there was actually any evidence to support it. Most scientific experts have dismissed the theory in favor of the much more likely explanation that the virus arose naturally between animals and humans; and even close U.S. allies have become critical of Washington’s efforts to promulgate the lab leak allegation. In addition, Trump’s public statement that “we believe [the virus] could have been stopped at the source, it could have been stopped quickly, and it wouldn’t have spread all over the world” is highly dubious, given that “the source” remains elusive after at least several months, and the virus inevitably would have spread—probably for weeks, as may have happened in the United States itself—before it could have been recognized and identified as something new.

This readiness in both Beijing and Washington to embrace misinformation and deliberate disinformation, and to believe the worst about each other, reflects the observation by nineteenth-century French writer Alexis de Tocqueville that “a false but clear and precise idea always has more power in the world than one which is true but complex.” The United States and China have stereotyped each other, and the downward trajectory of their relationship—driven in part by these stereotypes—was starting to accelerate even before the emergence of the coronavirus because of political, ideological, and structural trends on both sides. This has now been greatly exacerbated by the impact of the virus itself, which has understandably left both Americans and Chinese with a heightened sense of insecurity, vulnerability, and uncertainty about their future.

Under these circumstances, it is perhaps predictable that both nations would latch on to the “clear and precise idea” that the other was primarily responsible for their vulnerability and uncertainty, even though the reality and the truth are more complex than that, and both countries bear primary responsibility for their own susceptibility and response to the virus. But focusing instead on the perceived threat from outside serves to deflect the difficult challenge that both the United States and China face of confronting their self-inflicted wounds and systemic domestic crises.

Given the prevailing international environment and the intense societal and economic pressures on all sides, it will be very difficult to break this cycle, and to restore mutual trust, positive momentum, and a commitment to shared goals in the U.S.-China relationship. This is especially unfortunate because, as has been widely noted, the coronavirus is precisely the kind of transnational issue that cries out for U.S.-China cooperation against a common enemy. Neither Washington nor Beijing can afford to allow their current estrangement to persist over the longer term, or even the near term. But to salvage the situation, they will need to overcome their lack of both empathy and self-awareness, find an exit ramp from the blame game—and the emergence of a new cold war, and restore a basis for constructive, mutually-beneficial relations.

The recent debate over the rationale for and alleged failure of U.S. engagement with China has generated the notion that the United States must “deal with the China it has, not the China it wants.” One of the dangers now—paradoxically—is that Washington almost seems to want an adversarial China that poses an existential ideological and national security threat because such a China validates Americans’ sense of vulnerability and uncertainty. Plus, it provides an enemy against which to mobilize. Similarly, the Chinese appear to be rationalizing and girding for an increasingly hostile posture toward the United States. This impulse on both sides must be averted. On the contrary, the cooperative and constructive and peaceful U.S.-China relationship that both Americans and Chinese have long sought is still attainable, if they are willing and able to look beyond the coronavirus and reinvest in mutual understanding.