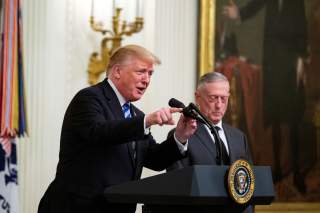 Once again, Donald Trump has relied on his “gut,” but this time his gut has misled him. Trump’s decision on withdrawing troops from Syria has shocked not only the more than seventy allies participating in the American-led coalition against ISIS, but also the Kurds who have shed much blood in the fight against the Islamic extremists, and the Israelis, who have relied upon America’s presence in Syria to prevent Iran establishing a presence along Israel’s border.

Most of all, however, it appears to have stunned Secretary of Defense Jim Mattis. Mattis has been deeply committed to maintaining America’s credibility with allies and demonstrating to adversaries that American strength has not waned. As he wrote in his resignation letter “we must be resolute and unambiguous in our approach to those countries whose strategic interests are increasingly in tension with ours. It is clear that China and Russia, for example, want to shape a world consistent with their authoritarian model—gaining veto authority over other nations’ economic, diplomatic, and security decisions—to promote their own interests at the expense of their neighbors, America and our allies. That is why we must use all the tools of American power to provide for the common defense.”

Trump clearly sees the world very differently. He has cozied up to Vladimir Putin, who was perhaps the first world leader to praise Trump’s decision to withdraw from Syria thereby leaving Russia as the arbiter of that country’s future. He has given Kim Jong Un a degree of prominence the North Korean leader has done nothing to deserve. He has attempted to satiate Turkish president Recip Tayyip Erdogan’s obsessive desire to have his archenemy Fethullah Galen extradited to Turkey. Trump seems to spend more time coddling autocrats than supporting democrats.

Trump’s characterization of Mattis’ departure as “retirement” was both risible and in character with so many of his pronouncements. Mattis resigned, and did so because to paraphrase Howard Beale’s memorable mantra in the 1976 movie Network, he was “mad as hell and...not going to take this anymore.” It is clear, to me at least, that the Secretary of Defense resigned over the president’s decision on Syria. When I last saw him just over a week ago he was in excellent spirits; there was no telltale hint of an impending departure. Contrary to rumors circulating around Washington, he did have meetings scheduled after the holiday season. But when President Trump abruptly upended his own Syria policy, and did so with a tweet rather than as a result of deliberate analysis and consultation with his senior civilian and military national security advisors, Mattis’ position, always tenuous in the chaotic administration of which he was a key player, became more difficult than ever. A man of great integrity who had taken the job purely in order to serve his country yet again, he did the honorable thing and resigned.

Trump’s preference for yes men is by now a well-known fact. He may prefer to choose someone far more accommodating of his whims than Jim Mattis. But leadership of America’s defense structure requires more than just a yes man. One need not be a four star general, but to lead the world’s most advanced and powerful military structure requires a degree of knowledge, experience and credibility that has sorely been lacking among too many of Trump’s appointees. No doubt someone will fill Mattis’ position, whether that person can fill Mattis’ shoes remains to be seen.