America and ASEAN: Strong Economic Pressure Can Save Myanmar 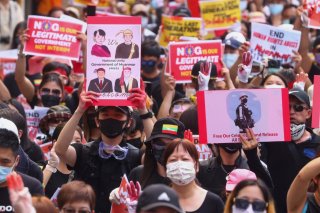 Last week, leaders of the Association for Southeast Asian Nations (ASEAN) held an emergency summit on Myanmar. They charted a way forward while Gen. Min Aung Hlaing sat alongside their negotiating table. Hlaing is the same man who oversaw genocide against the Rohingya, attempted a coup to preserve his privileges as commander-in-chief, and is now presiding over a campaign to terrorize his own people into submission.

The fate of Myanmar, though, will not be determined around a table where the people of Myanmar are not represented. Myanmar’s protestors remain resolute in rejecting the military’s attempted coup. Meanwhile, the military has stated that it will only recognize ASEAN’s mediation role once the “situation returns to stability.” As ASEAN clarifies its role, the United States should build a partnership with key member-states, underscoring the risk a collapsing Myanmar presents to ASEAN’s legitimacy, but also the region’s opportunity to respond in ways that enhance its standing in a shifting international order.

While Myanmar’s protestors are preventing the military from consolidating its attempted coup, they possess limited weapons of self-defense. The Civil Disobedience Movement is waging economic warfare against the military’s interests and the patronage system that reinforces its power. Doctors and teachers are crippling the military’s capacity to preside over the state. Civil servants and bank staff are denying the military any ability to normalize their rule and promote economic liberalization. People across Myanmar are maintaining this course of action because they know from past experience and other regional examples that if the generals firmly establish control, the generals will continue plundering the country’s wealth while deepening and prolonging their rule.

The military’s potential sources of domestic legitimacy are increasingly fragile under the weight of this economic pressure. Many elites from non-Bamar groups who may have previously benefitted from ceasefire arrangements with the military, have rejected those arrangements and joined the newly formed National Unity Government. Substantial elements of the Buddhist monastic order, meanwhile, are refusing to provide a moral sanctioning of the military’s activities. Meanwhile, civil disobedience is amplifying economic instability across the country. In particular, the protestors are challenging the system of material rewards for the military’s allies. For instance, boycotts of military-owned beer brands cut revenues by 90 percent from pre-coup levels. The military’s patronage system provides dividends from these holdings, a parallel society for soldiers and former soldiers and economic concessions to key constituencies. The growing material consequences of disobedience make it easier for erstwhile military allies to defect. In sum, the military’s support is less stable than ever before. They possess only a weak grip on absolute power.

Yet sustained resistance comes with an immense cost. It cannot be borne indefinitely, particularly by the most vulnerable. Myanmar’s economy is already battered by the coronavirus and now ravaged by a coup. One estimate suggests that the economy is on pace to contract by 20 percent this year.

Three pathways could emerge from this decisive, narrow moment of maximum domestic resistance.

First, the military succeeds in forcing society into submission. Under this scenario, the military terrorizes its way into control in some areas, while unwavering opposition leads to protracted conflict and recurring atrocities elsewhere. The poorest suffer as the entire economy is held back by chronic risk.

Second, the military is weakened by opposition activity but does not fold. The country careens further toward state failure, economic collapse, heightened conflict, and irrevocable catastrophe. Clearly, the world does not need another Libya, Syria, Yemen, Venezuela, or Afghanistan, particularly in the epicenter of growing geopolitical uncertainty between India, China, and mainland Southeast Asia.

Both of these pathways portend sustained economic suffering, compounding the indignities of a brutal regime. There is, though, a third possibility. Comprehensive, forceful, and immediate international pressure could strengthen the effects of civil disobedience, cajoling the military down a different route and alleviating a bleak long-term prognosis. This is, in fact, the pathway that protestors are trying to open up, but the world has done little to clear the way.

To date, sanctions have largely been incremental in their rollout and symbolic in effect. While actions against military holding companies are applying various pressures on the generals, they will not slow their crucial access to foreign reserves. Thus far, domestic protest has done the most to strain the military’s vital economic interests. The question is whether the international community will give appropriate cover and time to the protestors as they continue using economic boycotts to destroy the military’s other power bases.

No option is ideal. The military has created a situation where people across Myanmar will lose from further political violence and economic collapse. It’s critical to make sure this suffering—economic and otherwise—is not extended indefinitely, a likely outcome if the military consolidates its coup. In short, the risky option of maximum short-term pressure is better than the irrevocably dire repercussions of sustained authoritarian rule or a failed state.

ASEAN will not determine which pathway is taken. Yet its proximity and historical relations with Myanmar mean it can help shape the possibilities protestors inherit. And the United States is in a unique position to encourage ASEAN to turn up the pressure and open a better way forward. The United States retains enough influence to remind ASEAN that it can arrest this catastrophe before it threatens broader regional instability or legitimates military rule. To achieve this, the United States should especially focus on Thailand and Singapore.

While Thailand’s own military-led regime has clear political reasons to be wary of interference, Thailand is the ASEAN member most vulnerable to economic instability spilling over from Myanmar, because of its dependence on Myanmar’s natural gas exports, which would be jeopardized by state failure or extended civil war. Already, prices for natural gas in Thailand were more than 80 percent above average prices across Asia last summer, largely due to the slow liberalization of a market long-dominated by state-owned PTTEP.

Well-targeted sanctions on Myanmar’s energy exports could change Thailand’s calculous about blindly backing Myanmar’s generals. The Thai face their own protests, a resurgence of the coronavirus, and the threat of significant refugee flows. They can hardly face a spike in already-high energy prices. Meanwhile, Myanmar’s state-owned banks enable revenues from natural gas exports to reach the military. Adding those banks to the Specially Designated Nationals and Blocked Persons list would send payments from production into a protected account that the military cannot access. The military would not soon be able to fill this revenue gap in a moment of already extreme duress.

Singapore is also vital because this plan requires a credible threat of secondary sanctions on international banking institutions that otherwise facilitate the flow of funds to the military and those within its orbit. The United States must ensure that all correspondent banking relationships with state and military-backed financial institutions are closed. The United States should also use anti-money laundering tools to stop the flow of funds from illicit industries and military assets still held abroad. While these steps will strain key Singaporean banks with longstanding financial relationships with Myanmar’s state institutions, they have the benefit of creating domestic conditions that enable the Singaporean government to lead ASEAN’s response alongside Indonesia and Malaysia.

The United States must work with ASEAN to hasten the decline of the military’s economic fortunes and should challenge those who abet the military’s connections to global markets. If it takes both of those steps, it can then show how the crisis presents an opportunity for the region, especially in efforts to counterbalance the growing influence of China and present a viable path to ASEAN leadership on resolving the Myanmar crisis. And it is in this geopolitical battle, not in acquiescence to a brutalizing military, where the region’s long-term interests in sovereignty and non-interference lie.

To transform economic pressure into a U.S.-ASEAN partnership, America should fully recognize the National Unity Government, first formed by deposed parliamentarians and now incorporating many ethnic groups. With formal recognition, the government can attract more international aid, aid that will be needed as the military’s actions continue to produce severe economic consequences. In the process, the protestors can keep broadening their coalition. A credible alternative government will also make it easier for ASEAN to stand firmly against the military and to deliver on its post-summit humanitarian aid commitment without legitimizing the leaders of the attempted coup.

Finally, the United States should issue a credible threat of accountability to further pressure the generals’ calculus. This threat can serve as a final screw on international facilitators of the military’s patronage system.

As the new administration builds a coalition of allies in the Indo-Pacific region, Myanmar provides a chance to show how this coalition can be built around a common purpose, rather than mutual convenience. The only other choice, it seems, is to leave Myanmar’s people with little protection as they gather in the streets. This would be bad for ASEAN, disastrous for President Joe Biden’s human rights commitments, and humiliating for everyone who seeks to demonstrate that the region’s institutions are a durable force for stability and integration.