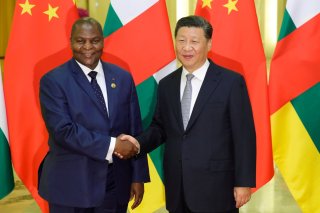 The United States has a limited window of opportunity to engage with African countries economically, politically, and socially before the entire continent orbits toward China. Beijing is not a new partner to African nations; it’s an old one. The relationship between China and Africa was solidified during the 1960s when African states fought for self-determination from European colonization. But like China, the United States, too, did not partake in colonizing the African continent and thus does not share the historical baggage of colonialism, economic and human exploitation, and negative social sentiments. Therefore, America can utilize its soft and hard power approaches to foster mutually beneficial partnerships, such as through foreign direct investment, economic aid initiatives, collaboration with local forces to combat non-state actors, and offering instruction on asymmetrical warfare. However, if the United States continues its current policies toward Africa, it will be handing the continent over to China on a silver platter.

Washington needs to re-engage economically, politically, and socially with African states and stop relying on autocratic leaders to secure America’s geopolitical interest to slow the rise in Chinese influence. African states will adopt either a Chinese model (one party-state with a capitalist economy), a Western model (a democratic form of governance with a capitalist economy), or a fusion of both customized to each country. Regardless of the choice, Washington needs to be a reliable partner, not pre-impose its political ideology, and adopt a laissez-faire approach.

What are China’s long-term interests in Africa? First, China is engaging with and investing in Africa in preparation for the “The African Century,” where the continent’s population will exceed 2.5 billion people—the largest in the world—of which 50 percent will be below the age of twenty-five. Second, it is exploring the development and implementation of the African Continental Free Trade Area (AfCFTA), a free trade area encompassing fifty-five African countries. Third, China is monopolizing access to Africa’s vast mineral resources and restricting the distribution of rare earth elements (REE). Finally, Beijing is confidently enhancing its military and political ties with African nations to attain their support at the United Nations on issues such as human rights, Taiwan, and the Uyghurs in Xinjiang.

Beijing is seeking to win the hearts and minds of Africa’s future leaders and influencers by offering them educational opportunities in China. Beijing is investing and exercising soft power in the education sector, and it is reported that China provided 12,000 scholarships to African students in 2021. The West should be worried: in 2003, only a meager 2,000 African students attended Chinese universities. In 2018, the number had increased to 81,000.

Therefore, if past historical trends are a predictive model for the future, then future African leaders educated in China will be acutely sympathetic to the Chinese model of economic development and governance and will most likely harbor resentments against the Western-style form of government and economic model of development. Consequently, an authoritarian one-state party with a free market economy would seem an ideal option for most African countries to follow, considering the Chinese model lifted 800 million people out of extreme poverty in four decades and, from 1979 to 2005, China’s GDP grew consistently for twenty-seven years at a rate of 9.6 percent annually. Of course, African countries should be at liberty to decide what economic and political development model they wish to follow. Still, it would be a geo-economic catastrophe for the United States to sit on the sideline and not develop a plan to counter Chinese influence. One concerted way of doing this would be to propose an African Marshall Plan centered on good governance, adherence to human rights, democratic forms of government with a free-market economy, infrastructure development, and partnerships in economic sustainability and human security.

Washington Can Make a Difference

Moreover, Washington should embrace the AfCFTA and become a partner for continental free trade. In the past, Africa was synonymous with poverty, famine, war, civil war, instability, insecurity, and government that lacked central authority. However, aside from a handful of countries—such as Somalia, South Sudan, Democratic Republic of Congo, Libya, and Eritrea (the last bastion of communism on the continent)—the historical perception of Africa has changed. Africa has made drastic changes over the previous two decades, and it seems the only country that has been paying attention is China. The West must update its understanding of Africa beyond the 1990s.

Economic interdependence and intra-African trade will lift millions of people out of poverty, raise the costs of regional conflict, improve regional security, reduce unemployment by creating infrastructure development, and facilitate the movement of people, goods, and services. The goal of AfCFTA is extraordinarily ambitious; it seeks to unite the following eight regional economic communities (RECs) into a singular economic alliance: Arab Maghreb Union, Common Market for Eastern and Southern Africa, Community of Sahel-Saharan States, East African Community, Economic Community of Central African States, Economic Community of West African States, Intergovernmental Authority on Development, and Southern Africa Development Community. Doing so would create one of the largest free-trade areas in the world.

If the AfCFTA were implemented, it could catapult Africa’s GDP to $3.4 trillion. At the same time, removing tariffs, promoting intra-Africa trade, and developing infrastructure for the movement of goods, people, and services would make Africa an essential player in the international community—and China knows it. Still, creating an economic coalition of this breadth and depth, almost resembling an African version of the European Union, faces many difficulties. Some of the challenges include a lack of infrastructure development between RECs, instability due to bad governance and non-state actors, institutionalized state corruption, and lack of accountability from member states. Notwithstanding, the AfCFTA project is moving forward, but who will be the ideal partner for Africa: the United States, or China?

Is Djibouti Just the Beginning?

Given that China has 10,000 Chinese state-owned corporations, nearly 260,000 Chinese laborers working on various infrastructure projects, and over 1 million settled immigrants living in Africa, it should be expected that China’s military presence in Africa will increase. Consequently, the West should not be surprised if Beijing establishes a second African military base, this time facing the Atlantic Ocean. Currently, China has one African military base in Djibouti, along the Bab-al Mandab Strait. Now, Beijing is looking for blue ocean territory on the western side of the continent where it can project power more freely. In terms of influence across Africa, a Chinese naval base on the Atlantic would serve to protect Chinese investments and workers tasked with building President Xi Jinping’s storied Belt and Road Initiative. Less publicly, the Chinese might want to increase military-to-military relations, possible future military exercises with African nations, and, most importantly, increase the sale of Chinese weapons.

Although Russia is the undisputed heavyweight arms exporter to the African continent—accounting for 44 percent of arms sales to Africa from 2017 to 2021—China has used the opportunity provided by the international sanctions campaign against Moscow to dump weapons at discounted rates in Africa. In fact, China has recently displaced Russia’s traditional Russian market share and is seeking to surpass the United States as the second-largest arms exporter to the continent. To date, China’s significant African customers are Tanzania, Nigeria, Sudan, Cameroon, Zimbabwe, Zambia, Gabon, Algeria, Namibia, Ghana, and Ethiopia. As a result, Sub-Saharan Africa will be a contested ground for Chinese military, political, and economic influence.

A Marriage of Convenience or Necessity?

Even though China and Africa’s current economic interdependence favors Beijing, Western critics must understand that the economic and political ties between China and Africa are convenient for both parties. And, over time, unfair business transactions between Chinese state-owned enterprises and African nations can be renegotiated to the increased benefit of African parties. China-Africa trade is not a zero-sum game as some critics would like to portray it.

The increase in China’s appetite for natural resources and increased conflict between the United States and China will give African nations a window of opportunity to either remain non-aligned or choose a side. If history offers us any glimpse into the future, a non-aligned Africa would be a suitable option for African countries; however, will they turn down the lure of Chinese investment and partnership?

The United States is willingly missing a window of opportunity to engage with Africa economically, socially, and politically—and when this window closes, it will not reopen easily. As the United States fully transitions to the emerging multipolar world, it will realize that the Global South—which is flocking toward China—has taken on new importance. To slow down China’s economic and military rise, the United States must buck antiquated assumptions, re-engage Africa, establish a mutually beneficial partnership, and offer genuine partnership. By doing so, Washington may yet avoid the future confrontation it fears most: having to confront a once-rising power that has surpassed the United States.

Daniel Haile is a U.S. Army officer and a graduate student at Texas A&M University. The ideas in this essay are solely those of the author and do not represent the official position of the U.S. Army or Department of Defense.