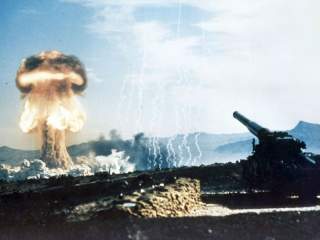 Donald Trump is once again causing consternation among world leaders. His remarks about South Korea and Japan developing nuclear weapons have set off a minor firestorm. “It would be catastrophic were the United States to shift its position and indicate that we support somehow the proliferation of nuclear weapons to additional countries,” argued deputy national security adviser Ben Rhodes.

What would be catastrophic is American involvement in a nuclear war as a result of its defense commitment to another nation, especially on behalf of one that can defend itself. Indeed, Rhodes praised the fact that “Japan and the Republic of Korea benefit from our very rock-solid security assurances that we will come to their defense in any event.” But this has turned prosperous, populous countries into permanent defense dependents.

Trump addressed this dependency. Neither country pays enough for its own protection, instead preferring to rely on Washington. He suggested that one answer would be for them to go nuclear. The issue “at some point is something that we have to talk about,” he explained.

That’s hardly a radical sentiment. The issue recently was raised by a former presidential candidate in South Korea; as president during the 1960s, the current president’s father pursued a nuclear program before caving in to U.S. pressure. After Trump’s remarks Cheong Seong-chang of the Sejong Institute observed: “If we have nuclear weapons, we’ll be in a much better position to deal with North Korea.”

Over the years there has been talk in Japan about pursuing the nuclear option. In an earlier political incarnation the current prime minister Shinzo Abe seemed open to discussing the subject and the country is slowly doing more militarily. Former Osaka Mayor Toru Hashimoto said Trump’s sentiments allowed “Japan to change the peace-addled notion that America will protect us.”

Despite the campaign to treat nuclear nonproliferation as sacrosanct, it is an issue the United States tends to honor in the breach. Washington does not press Britain or France to abandon their nuclear programs. American officials never criticize Israel for its nuclear arsenal. The United States reluctantly accepted India as nuclear power. However laudable nonproliferation as an objective, policymakers always balance it with other interests.

Moreover, nonproliferation cannot be decided in isolation. Broadly speaking, it is better if fewer nations have nukes. Yet in some cases proliferation might be stabilizing. For instance, it is widely believed that the U.S.–Soviet nuclear balance helped prevent the outbreak of conventional conflict during the Cold War. Neither party wanted to risk the next step. In contrast, had Ukraine not given up its nuclear weapons left over from the collapse of the Soviet Union, Russia might not have grabbed Crimea and supported separatists elsewhere.

Worse, the way Washington won assent of some nuclear-capable powers to abstain is to provide a “nuclear umbrella,” that is, promise to use nukes to defend them if necessary. As a result, the price of nonproliferation in East Asia is America’s willingness to risk Los Angeles to protect Seoul and Tokyo, and maybe Taipei and Canberra too. Nonproliferation has turned out a lot like domestic gun control: only the bad guys get guns. In China, Russia, and North Korea are the nuclear powers. America is supposed to provide geopolitical balance.

The result of this situation truly could be catastrophic.

And while there was good reason to oppose President Park Chung-hee, a dictator in charge of a still poor and unstable Republic of Korea, the same objections do not apply to his daughter and the much wealthier democracy she leads. While few might have been inclined to trust Japan just two or three decades after World War II, now more than seventy years have passed. Surely Tokyo is far more trustworthy than well-armed Beijing.

Thus, the question is what approach is likely to most promote stability in Northeast Asia and least risk to U.S. security. So far, America’s defense promises have not caused China’s dragon or Russia’s bear to lie down with the lamb. China is acting aggressively toward Japan, Philippines, and Vietnam in particular; Russia continues to challenges the United States. North Korea is worse, constantly breathing fire against its neighbors and the United States.

Still, policymakers act as if U.S. defense guarantees will never be invoked. The threat of nuclear retaliation undoubtedly has inherent deterrent value. However, the two great wars of the 20th century started because deterrence failed. In particular, threats which seem inconsistent with underlying interests have little credibility. Thus, the Chinese have publicly doubted that America would risk nuclear war over Taiwan’s independence.

Moreover, once given, it is hard to back away from “rock solid security assurances” which have lost their original purpose. If deterrence fails, America could be at war automatically with whomever defies us. But that is a decision which should be taken only after serious consideration for vital stakes. It isn’t obvious that South Korea or Japan’s friendship is worth a nuclear contest.

Finally, promising to defend other, smaller powers allows them to hold American security hostage. With Washington behind them they are more likely to engage in risky behavior. In 2008 Georgia’s Mikhail Saakashvili provoked a war with Russia. During the 2000s Taiwan’s independence-minded Chen Shui-bian (later convicted of corruption) upset Chinese sensibilities. Both leaders were convinced of U.S. support.

Japan has refused to even discuss the status of the Senkaku/Diaoyu Islands with China. Washington’s view that they are covered by the “mutual” defense treaty likely has encouraged Tokyo’s tough stance. Philippines has a military which might not be even second rate, yet that government is attempting to enlist the United States in its squabble with Beijing over Scarborough Reef.

It’s one thing to risk a naval confrontation over various worthless pieces of rock in the Asia-Pacific. It’s quite another to contemplate nuclear war.

Which suggests that America’s nuclear umbrella really is something we should debate, as Trump suggested. Yet Rhodes dismissed even discussing the idea, contending that “for the past 70 years” the United States has opposed nuclear proliferation. But one of the worsts arguments for a policy today is that we’ve always done it that way. After all, the world changes over time. In recent years those changes have come particularly quickly.

Although American policymakers prefer to assume that what has ever been must ever be, Trump was right when he argued that “At some point, we cannot be the policeman of the world,” which, alas, now is nuclear. America’s nuclear umbrella deserves even more scrutiny than other aspects of U.S. security policy. The greatest risk of catastrophe for this nation would be sleepwalking into an Asian nuclear war.